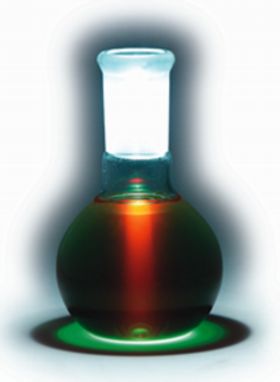 Figure 1.13 Catching the Light is a demonstration of photosynthesis in action. Photosynthesis begins when light is absorbed by chlorophyll. The flask contains chlorophyll extracted from spinach leaves. When a beam of light passes through the extract, the chlorophyll absorbs this energy. But because the chlorophyll in the flask has been isolated from the plant, energy cannot be converted and stored as sugar. Instead it is released as heat and red fluorescence. Note the green ring below the flask which is transmitted light, the colour we normally perceive for chlorophyll. The colour of a leaf is green because it reflects and transmits green light but absorbs the blue and red components of white light. (Image courtesy R. Hangarter)