Plant canopies are structurally diverse because of unique spatial patterns that different species adopt for intercepting light and the diversity of plant species which occupies a natural community. For example, there is considerable penetration of sunlight through the canopy of a dry eucalypt forest. Conversely in dense rainforest or in a radiata pine plantation, only sunflecks reach the ground. A considered glance from ground to tree top reveals why these dissimilarities occur (Figure 12.25). 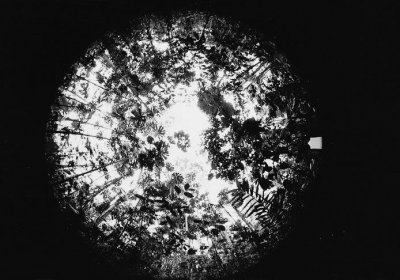 Experiments were in progress at this site in Cameroon on microclimate responses to forest management. Trees had been clear felled mechanically, clear felled manually or selectively cleared. Growth rate of newly planted saplings was measured in these plots and compared to growth in undisturbed plots. Hemispherical photographs were used to calculate change in canopy cover and solar radiation load on different plots (shown here). Hemispherical photographs can also be used to calculate potential contribution from sunflecks by plotting the sun's path across a photograph.

The ﬁrst reason for such dissimilarities is based on canopy density or the quantity of leaf area per unit canopy volume. This index is substantially less for a dry eucalypt forest than that for a rainforest or pine forest. The second reason relates to the display of the foliage. Adult leaves of eucalypts are typically pendulous, allowing much of the incident light and energy to pass uninterrupted through the canopy and to reach the ground. Conversely, in a diverse rainforest, many species display their leaves at shallower angles to the horizontal, thereby absorbing a larger proportion of incident radiation and preventing much of the incident light and energy being transmitted to the ground.