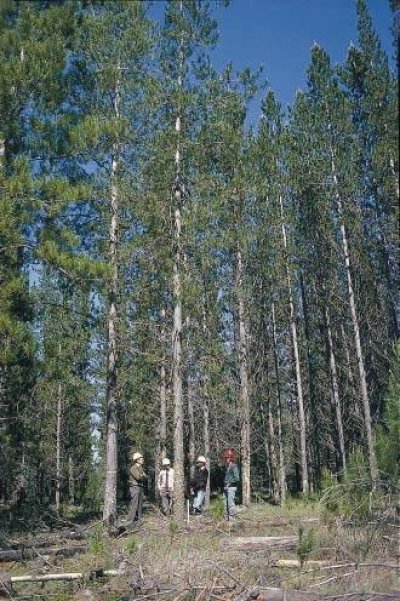 Figure 1 Radiata pine (a provenance of Pinus radiata from the Pacific island of Guadalupe off the coast of Mexico) growing in a provenance trial on a dry site near Canberra. (Photograph courtesy P.E. Kriedemann)

Pines are a useful example to study patterns of forest production and light use efficiency because Pinus is the most widely studied genus of trees and occurs in environments ranging from boreal zones to the tropics. Pines have been established as plantations worldwide, including on dry sites as shown in Figure 1. This low-input site resulted in a sparse canopy that would thicken considerably with additional water and nutrients but serves to illustrate how close planting results in straight stems with little taper. For closed-canopy pine forests across this diversity of environments, measured rates of annual above-ground dry matter production vary 30-fold from 0.2 to 5 kg m–2 year–1 with wood production ranging from near zero up to 4.2 kg m–2 year–1 (Table 1). Can this huge range be explained from our knowledge of physiological and ecological processes, and, in particular, are differences in canopy use of sunlight responsible?

Canopy photosynthesis depends on distribution of sunlight over individual foliage elements. Because light is unevenly distributed within canopies, leaf photosynthetic rates vary spatially. Photosynthesis also varies temporally because of fluctuating environmental conditions. This ﬁne-scale variability in light distribution and photosynthesis has been successfully described by detailed simulation models of canopy processes. An alternative modelling approach is to ignore ﬁne-scale variability and to focus instead on canopy-scale relationships. That approach was pioneered by Monteith (1977) examining the relationship between dry matter production and absorbed photosynthetically active radiation (APAR) for canopies of four crops (apples, barley, potatoes and sugar beet) under ideal growing conditions in Britain (see Figure 12.22). Monteith discovered that these relationships were linear and that their slopes, the so-called light utilisation coefﬁcient (\(\varepsilon\)), were similar for all four species (\(\varepsilon\) ~ 2.8 g dry mass MJ–1 PAR).

Monteith regarded the value for \(\varepsilon\) of 2.8 g dry mass MJ–1 as an upper limit to growth efﬁciency and used it to estimate potential arable crop production of Britain. He also observed that ﬁeld-grown arable crops usually have values of \(\varepsilon\) well below this upper limit.

Monteith’s study was followed by similar studies on other crops (e.g. Muchow and Davis 1988) and trees (Landsberg et al. 1996). This work has tended to conﬁrm the relationship’s linearity, but has revealed that the slope \(\varepsilon\) varies considerably between species, and is greatly reduced when growing conditions are suboptimal. For tree stands, values of \(\varepsilon\) are usually evaluated as above-ground dry matter yield per unit APAR. Published values range from 0.2 g MJ–1 for older tropical forest stands to 2.8 g MJ–1 for young pot-grown Salix and Populus stands (Landsberg et al. 1996). Values of \(\varepsilon\) are given in Table 2 for four pine species growing at ﬁve experimental sites with contrasting environments in Australia, New Zealand, the USA and Sweden. Across these contrasting environments, one boreal, one subtropical and three temperate, above-ground productivity ranged from 0.39 to 3.2 kg m–2 year–1, wood production from 0.22 to 2.5 kg m–2 year–1, and values of \(\varepsilon\), derived from measured above-ground production and simulated APAR, from 0.27 to 1.4 g MJ–1. 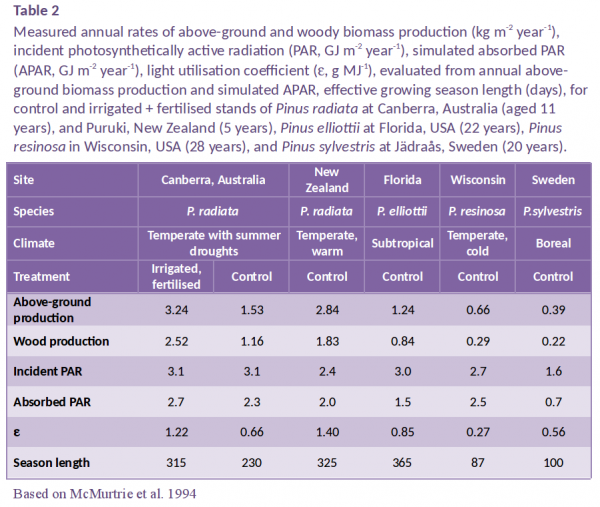 For the pine stands considered in Table 2, sufﬁcient data are available to analyse causes of variation in \(\varepsilon\). A useful starting point for that analysis is the biochemical upper limit to \(\varepsilon\). That limit, determined by the quantum requirement of photosynthesis, is characterised by the quantum yield of photosynthesis, which for C3 plants (modiﬁed for the spectral composition of light and photorespiratory carbon loss) is conservatively 0.06 mole CO2 per mole absorbed quanta, corresponding to an energy conversion efﬁciency of 6%. That efﬁciency can be converted to an equivalent light utilisation coefﬁcient if we know the energy content of incident light, a function of its spectral composition. Assuming an energy content of 0.22 MJ mol–1 and assuming the carbon content of biomass is 0.45 gives an equivalent light utilisation coefﬁcient of approximately 7.3 g dry mass MJ–1.

There are several reasons why this biochemical upper limit is not attained in nature. One reason is that leaf photosynthetic efﬁciency declines as quantum flux increases; according to models of canopy photosynthesis, this light saturation of photosynthesis leads to a reduction of 50–60% in photosynthetic carbon gain (i.e. a loss factor of 0.45). Values of \(\varepsilon\) are further reduced because of respiratory losses associated with the maintenance of living tissue and the growth of new tissue; gas exchange measurements in pine forests show that this process leads to a reduction of 40–60% for closed-canopy forests (loss factor = 0.5) (Figure 2). Another reason for the reduction of \(\varepsilon\) is carbon allocation to root growth, approximately 15–25% for highly fertile stands (loss factor = 0.8). The combined effect of light saturation, respiratory losses and below-ground allocation is to reduce \(\varepsilon\) to 7.3 x 0.45 x 0.5 x 0.8 = 1.3 g MJ–1, a value which is similar to that estimated from measured growth of Pinus radiata in highly productive New Zealand and Canberra stands (Table 2).

Site nutrition can also affect \(\varepsilon\) by altering either total carbon gain, or the proportion of carbon allocated to root growth; for example, soil fertility is poor at the Florida, Sweden and Canberra (control) sites, all of which have low \(\varepsilon\) values. The Canberra experiment is an interesting illustration of the effect of nutrition on below-ground carbon allocation (Figure 2); ﬁne-root production is lowest on the irrigated + fertilised plot, 8% of net primary production (NPP) compared with 20% on the control and irrigated stands (Ryan et al. 1996). 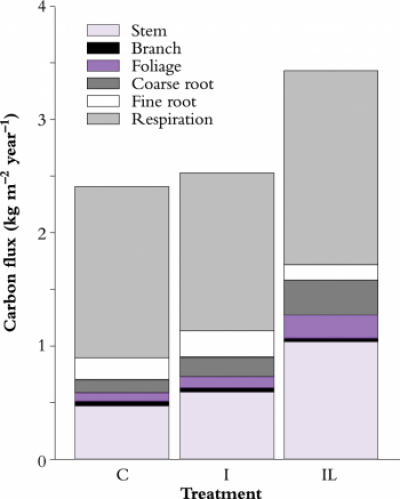 Several conclusions can be drawn from this analysis of light utilisation. First, the above \(\varepsilon\) model can explain observed productivities of fertile, well-watered pine stands as the estimated biochemical limit minus unavoidable losses associated with light saturation of photosynthesis, respiration and below-ground allocation. For these highly productive forests, the largest single loss factor for \(\varepsilon\) is associated with light saturation of photosynthesis (loss factor = 0.45). The magnitude of that reduction depends on both leaf physiology, particularly light-saturated rates of photosynthesis, and the within-canopy light environment, which in turn is a function of cloudiness and canopy structural properties such as shoot structure and crown architecture.

A second conclusion from the data in Table 2 is that in four of the six stands, extreme weather conditions reduce the effective length of the growing season, and that this reduction is critical in explaining differences in \(\varepsilon\) among forest stands. Shortened growing seasons appear to be the primary reason why \(\varepsilon\) is low for the Wisconsin, Swedish and Canberra (control) stands. For species experiencing cold winters (Wisconsin and Sweden), it is important to understand how temperature and daylength affect leaf phenology, especially rates of leaf growth and photosynthesis as trees emerge from winter dormancy. The low value of \(\varepsilon\) for Pinus radiata at the control stand in Canberra is due largely to water stress, with low annual rainfall coupled with high transpiration rates in summer months, leading to rapid depletion of soil water reserves and a shortened effective growing season.

A sidelight to the above discussion is the observation that NPP is proportional to APAR at the canopy scale (Section 12.3.2, Figure 12.26), although leaf photosynthetic rates saturate at high quantum flux. This puzzling observation appears to be largely explained by the different time scales used in measurements of NPP and photosynthesis; NPP is usually measured over a growing season whereas photosynthesis is measured over periods of seconds or minutes. When canopy models are used to evaluate short-term (e.g. daily) NPP, saturation is found at high quantum flux (Medlyn 1996; Sands 1996). However, simulated annual values of \(\varepsilon\) are relatively constant because annual incident PAR varies little from year to year. Other studies have proposed that \(\varepsilon\) is constant because of compensatory effects of leaf area index, incident PAR and leaf nitrogen content (e.g. Sands 1996). Either way, prediction and observation of NPP have proved congruent across a wide range of genotype × environment combinations, and conﬁrm the robustness of process-based simulation models.