The shortest UV wavelengths reaching ground level are in the UV-B range (280–320 nm). This wavelength range represents up to 1.5% of extraterrestrial irradiance, and it is attenuated to 0.5% or less of total irradiance reaching the earth’s surface (Figure 12.31). While UV-B is only minor in terms of total solar irradiance at ground level, the high energy of UV photons make UV-B a photo-chemically active and biologically signiﬁcant form of radiation. Proteins, DNA and RNA, absorb UV-B radiation strongly (Figure 12.31) and are thus prone to damage. As production and destruction of stratospheric ozone is largely dependent on absorption of solar UV, the ozone ‘layer’ essentially shields the earth’s surface from most UV radiation. However, even small increases in UV-B irradiation arising from depletion in stratospheric ozone could have signiﬁcant effects on biological systems. 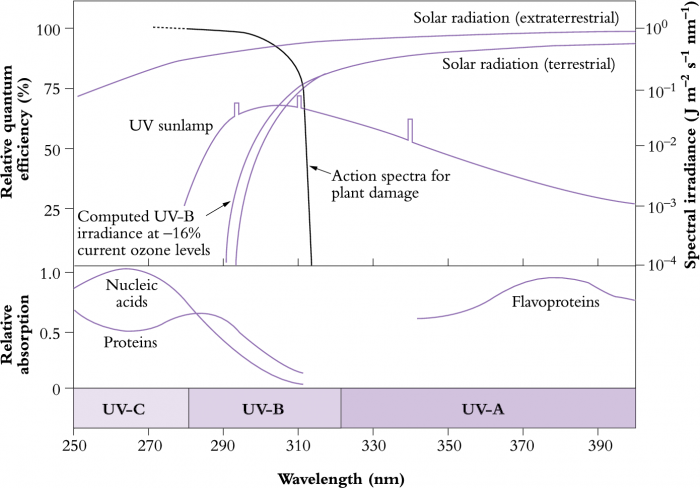 A question remains about the causes of the ozone hole. Notwithstanding a consensus on stratospheric chemistry and UV-B among atmospheric scientists, could the ozone hole be a ‘natural’ phenomenon? 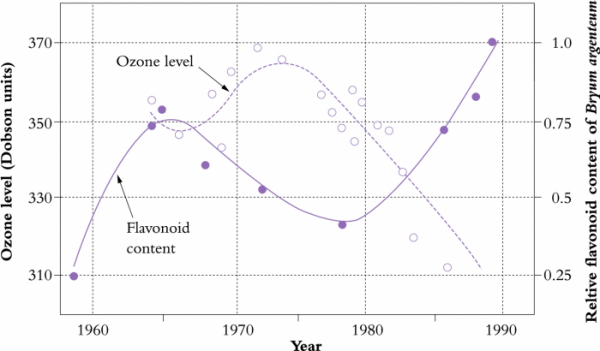 Figure 12.32 Reciprocal variation in atmospheric ozone over the South Pole (open symbols), and flavonoid content of the moss Bryum argenteum (solid symbols). Ozone concentration is indicated as Dobson units which represent the physical thickness of the ozone layer at a pressure of one atmosphere (e.g. 300 Dobson units = 3 mm). (Original data R.K. Markham)

Ground-based measurements of ozone over the South Pole made between 1964 and 1986 imply that ozone depletion over the Antarctic is not necessarily a consequence of recent human activity and may have been influenced by ‘natural’ processes. This view was supported by measurements of flavonoid levels in samples of the moss Bryum argenteum (Figure 12.32). Flavonoids are synthesised in Bryum as a UV-B-screening pigment and synthesis is sensitive to small changes in UV-B irradiation. Samples of Bryum collected from the Ross Sea area between 1957 and 1989 showed that flavonoid content rose markedly during the mid-1960s. This was correlated with a reduction in ozone levels at the time, but ahead of any serious accumulation of CFCs (chlorofluorocarbon compounds) that are considered to affect the atmospheric concentrations of ozone. Key agents in this mid-1960s ozone depletion are believed to include altered sunspot activity, emissions from volcanic eruptions and atmospheric tests of nuclear weapons in the early 1960s.

‹ 12.4.4 - Orchard design, canopy management and light interception up 12.5.1 - Ultraviolet radiation and plant biology ›
Back to top