Investigations of UV effects on plant biology largely depend on the use of UV-B emitting lamps in both laboratory and ﬁeld. Interpretation of results from such systems is, however, restricted by an inability to mimic the solar spectrum precisely (Figure 12.31). As a consequence, comparisons between species with respect to UV-B sensitivity, and analyses of processes responsible for variation in sensitivity, must be treated circumspectly. Despite these methodological limitations, overall outcomes are unambiguous: UV-B radiation impacts on many aspects of plant biology, as reviewed by Tevini (1994) and Bornman and Teramura (1993).

(a) Growth and development

Sensitivity to UV-B irradiation includes any morphological, physiological or biochemical change induced by UV-B. Signiﬁcant effects have been reported for about half of the 300 or so crop species and cultivars studied so far, with some species more susceptible than others (Table 12.2). Sensitivity is noticeable in plant growth and development. Reduction in leaf area, stem growth (stunting) and total plant biomass are commonplace. Additional symptoms include bronzing and glazing of leaf surfaces. 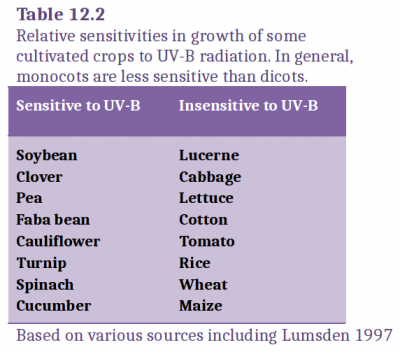 Growth reductions depend not only on the level of UV-B exposure but on the associated photon irradiance. Partitioning of growth to different organs, for example altered internode length, or leaf production, is also sensitive to UV-B irradiation. Such morphological changes may not be signiﬁcant to plants in isolation but may influence competitive interactions, and especially their competition for sunlight. Sensitivity to UV-B irradiation also varies with life cycle. Seedlings are especially vulnerable, as are mature plants under-going their transition from vegetative growth to reproductive development.

Several sets of processes at both cellular and molecular levels which are critical to plant growth and reproductive development appear to be affected by absorption of UV-B radiation. Especially prominent are photosynthesis, signal transduction and nucleic acid metabolism.

In general, UV-B radiation causes a net inhibition of photosynthesis in a wide range of plants. From laboratory studies, this inhibition appears to arise from disruptions at a number of points in the photosynthetic cycle, including disruption of PSII reaction centres (Strid et al. 1990), a decrease in Rubisco activity and damage to photosynthetic pigments (chlorophylls and carotenoids). Stomatal function, and thus leaf gas exchange, is also commonly impaired.

Alterations in plant growth induced by UV-B radiation have been partly attributed to changes in nucleic acid structure and function (Tevini 1994). DNA absorbs strongly in the UV region and is thus especially prone to damage by UV-B radiation (Figure 12.31). The most common lesions are breaks in DNA chains, with a resultant production of thymine dimers. They in turn interfere with accurate base pairing, leading to a disruption of transcription and replication of DNA (Stapleton 1992). These disruptions amount to a mutagenic action for UV radiation in many organisms. Proteins and RNA can also absorb UV-B and are inactivated as a result, but this loss is of secondary importance due to their relative abundance compared with DNA (Stapleton 1992).

Activation and photo-deactivation of important signal molecules, such as hormones and photoreceptors, may also compound effects of UV-B irradiation on plant growth and development. For example, cell extension in many plants is influenced by indole acetic acid (IAA) which absorbs in the UV-B region and is photo-oxidised to 3-methyleneoxindole, an inhibitor of hypocotyl growth when exogenously applied. In contrast, irradiation with UV-B can induce enzyme activity in the shikimic acid pathway, which regulates the synthesis of a broad array of plant compounds, ranging from flavonoids to lignin, all of which are important to plant function, including tolerance to UV-B radiation.

Flowering, pollination and seed development are variously affected by UV-B irradiation. Flowering appears to be disrupted by UV-B radiation by decreases in flower number and alteration in timing reported in the few species so far studied. Such effects may have important consequences for natural plant populations, which rely on the synchrony of flowering with the presence of appropriate insect pollinators.

Although pollen appears resilient to UV-B radiation damage, owing to high levels of flavonoids in the anthers and pollen wall, germinating pollen tubes are highly sensitive to UV radiation and suffer from large decreases in growth rate. Such disruption can lead to lowered fertilisation success and decreases in seed yield.

Genetic variation in sensitivity to UV-B radiation has implications for plant competition and thus plant ecosystem dynamics and community structure, in both natural and managed ecosystems. Competition between agricultural crops and associated weeds may be altered under enhanced UV-B irradiation. In the few studies considering the impact of UV-B irradiation on natural plant communities, most notable is the work of Caldwell et al. (1982). They found arctic plant species were much more sensitive to UV-B, both in terms of growth and reproduction, than alpine species. Arctic species grow under a naturally low UV-B environment, whereas alpine species grow under a naturally high UV-B environment by virtue of higher altitude. Arctic plant communities could thus be altered to a greater extent than alpine communities by any substantial rise in natural UV-B.

Many organisms have evolved mechanisms to undo the molecular damage caused by UV radiation. Possibly the most adaptive are terrestrial plants that rely on full sunlight for photosynthesis. Protective mechanisms can be classiﬁed into two main classes: (1) those whereby UV damage is repaired or its effects negated or minimised, and (2) those whereby the amount of UV radiation actually reaching sensitive areas is reduced. While protective in nature, all of these mechanisms impose an energy cost on plants so adapted.

For the ﬁrst class of protective mechanism, organisms have developed three important repair processes for UV-induced DNA damage (Stapleton 1992): photoreactivation, excision and repair of DNA, and post-replication repair. Photoreactivation is the light-induced enzymatic process which cleaves pyrimidine dimers formed by UV radiation — thus restoring proper base pairing. Excision and repair of DNA involves the excision of UV photoproducts from DNA molecules (this mechanism requires no light energy and uses undamaged DNA templates as a guide). Post-replication repair occurs where DNA lesions are bypassed during DNA replication and information from the sister duplex is later used to ﬁll gaps.

As mentioned above, plant growth and development is slowed by exposure to enhanced UV-B radiation. Such delay also minimises adverse effects from damage that has occurred. Growth delay and slower cell division provides additional time for DNA repair mechanisms to operate ahead of any recommencement in DNA replication. 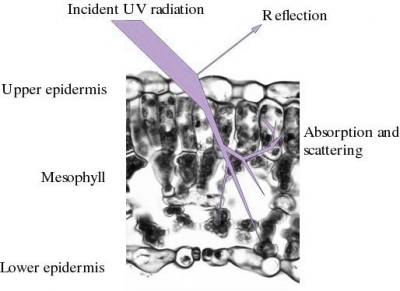 Screening sensitive tissues from UV-B radiation is a secondary option available to plants either to avoid or at least minimise damage. Tissue screening may be achieved through structural modiﬁcation of organs or by screening molecules which absorb UV radiation. Such features may be either static, as with leaf orientation or phototaxis, or dynamic, as in synthesis of screening molecules which absorb UV radiation in a highly selective way. Screening molecules commonly appear after exposure to UV radiation as secondary metabolites such as flavonoids. Substantial amounts of such pigments accumulate especially in the upper epidermis of leaves. Along with cuticular waxes and other cellular components, these substances attenuate incident UV radiation, and energy transmitted to underlying tissue is decreased by up to two orders of magnitude (Figure 12.33). Typically less than 1% of incident UV-B radiation reaches the lower epidermis. None is transmitted through an entire leaf. Flavonoid pigments are synthesised by leaves on many plants in direct response to UV radiation.

Elevated CO2 levels may also modify the response of sensitive plants to UV-B irradiation. In rice and wheat (but not in soybean) an increase in seed yield and biomass under elevated CO2 was reversed under moderate levels of supplementary UV-B irradiation.