(a) Historical evidence for photorespiration

The first line of evidence for photorespiration came from the different compensation points of C3 and C4 plants. When air is recirculated over an illuminated leaf in a closed system, photosynthesis will reduce CO2 concentration to a low level where fixation of CO2 by photosynthesis is just offset by release from respiration. For many C3 plants this compensation point is around 50 µL L–1 but is markedly affected by oxygen, photon irradiance and leaf temperature (Tregunna et al. 1966; Zelitch 1966). In low concentrations (1–2% O2) the CO2 compensation point of C3 plants is near zero. Significantly, early researchers in this area had already noted that some tropical grass species appeared to have a compensation point at or close to zero CO2, even in normal air (20% O2). This was first reported for corn (Zea mays) (Meidner 1962) and raised a very perplexing question as to whether these species even respired in light. However, we now know that C4 photosynthesis is responsible for the low evolution of CO2 (Section 2.2) and that C4 plants have a CO2 concentrating mechanism that forestalls photorespiration, resulting in a CO2 compensation point close to zero. 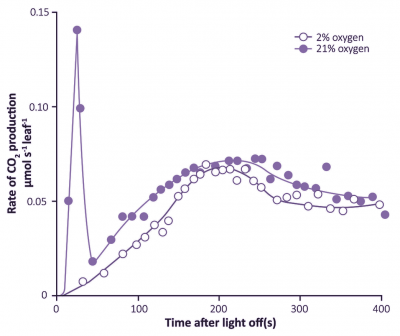 Figure 2.12. Photosynthesising leaves show a post-illumination burst of CO2 which varies in strength according to surrounding O2 concentration. This positive response to O2 was found at 105 µmol quanta m-2 s-1 and is functionally linked to O2 effects on the CO2 compensation point as measured under steady-state conditions. (Based on Krotkov 1963)

A second line of evidence for leaf respiration in light was provided by a transient increase in release of CO2 when leaves are transferred from light to dark. This ‘post-illumination CO2 burst’ was studied extensively during the early 1960s by Gleb Krotkov and colleagues at Queens University (Kingston, Ontario). The intensity of this burst increased with the photon irradiance during the preceding period of photosynthesis. Understandably, the Queens group regarded this post-illumination burst as a ‘remnant’ of respiratory processes in light, and coined the term ‘photorespiration’. A functional link with the CO2 compensation point was inferred, because the burst was abolished in low O2 (Figure 2.12). A competitive inhibition by O2 on CO2 assimilation was suspected and was subsequently proved to be particularly relevant in defining Rubisco’s properties. Nevertheless, for many years a biochemical explanation for interaction between these two gases remained elusive.

Significant progress came when Ludwig and Krotkov designed an open gas exchange system in which 14CO2 was used to separate the fixing (photosynthetic) and evolving (respiratory) fluxes of CO2 for an illuminated leaf (Ludwig and Canvin 1971). Results using this steady-rate labelling technique were particularly revealing and provided the first direct evidence that respiratory processes in light were qualitatively different from those in darkness. They were able to show that CO2 evolved during normal high rates of photosynthesis by an attached sunflower leaf was derived from currently fixed carbon. The specific activity of evolved CO2 (ratio of 14C to 12C) was essentially the same as that of the CO2 being fixed, indicating that photorespiratory substrates were closely related to the initial products of fixation. Ludwig and Krotkov concluded that 14CO2 supplied to a photosynthesising leaf was being re-evolved within 28–45 s! Furthermore the rate of CO2 evolution in light was as much as three times the rate in darkness, and while early fixed products of photosynthesis (intermediates of the PCR cycle) were respired in light, this was not the case in darkness.

The radiolabelling method of Ludwig and Krotkov had, for the first time, provided measurements of what could be regarded as a true estimate of light-driven respiration which was not complicated by transient effects (as the post-illumination burst had been), or by changes in CO2 concentration (as was the case for measurements in closed gas exchange systems or in CO2-free air) or by difficulties associated with detached organs. Ludwig and Canvin (1971) subsequently concluded that processes underlying photorespiration re-evolved 25% of the CO2 which was being fixed concurrently by photosynthesis. Such a rate of CO2 loss was not a trivial process so a biochemical basis for its operation had to be established, and particularly when photorespiration seemed to be quite different from known mechanisms of dark (mitochondrial) respiration.

The search for the substrates of ‘photorespiration’ occupied many laboratories worldwide for many years. Much work centred on synthesis and oxidation of the two-carbon acid glycolate because as early as 1920 Warburg had reported that CO2 fixation by illuminated Chlorella was inhibited by O2, and under these conditions the alga excreted massive amounts of glycolic acid (Warburg and Krippahl 1960). Numerous reports on the nature of the 14C-labelled products of photosynthesis showed that glycolate was a prominent early-labelled product. A very wide variety of research with algae and leaves of many higher plants established two significant features of glycolate synthesis: formation was enhanced in either low CO2 or high O2. Both of these features had been predicted from Ludwig’s physiological gas exchange work and eventually proved a key to understanding the biochemistry of photorespiration.

The photosynthetic carbon reduction (PCR) cycle for CO2 fixation (Section 2.1) involves an initial carboxylation of ribulose-1,5-bisphosphate (RuBP) to form 3-PGA, but makes no provision for glycolate synthesis. However, Wang and Waygood (1962) had described the ‘glycolate pathway’, namely a series of reactions in which glycolate is oxidised to glyoxylate and aminated, first to form glycine and subsequently the three-carbon amino acid serine. The intracellular location of this pathway in leaves was established in a series of elegant studies by Tolbert and his colleagues who also established that leaf microbodies (peroxisomes) were responsible for glycolate oxidation and the synthesis of glycine. Kisaki and Tolbert (1969) suggested that the yield of CO2 from the condensation of two molecules of glycine to form serine could account for the CO2 evolved in photorespiration. This idea was incorporated in later formulations of the pathway.

What remained elusive was the source of photosynthetically produced glycolate. Many studies had suggested that the sugar bisphosphates of the PCR cycle could yield a two-carbon fragment which, on the basis of short-term 14CO2 fixation, would have its two carbon atoms uniformly labelled (if the two carbons were to be derived directly from 3-PGA this would not be the case as PGA was asymmetrically labelled in the carboxyl group). The mechanism was likened to the release of the active ‘glycolaldehyde’ transferred in the thiamine pyrophosphate (TPP)-linked transketolase-catalysed reactions of the PCR cycle. In some cases significant glycolate synthesis from the sugar bisphosphate intermediates of the cycle were demonstrated in vitro; however, the rates were typically too low to constitute a viable mechanism for glycolate synthesis in vivo.

A more dynamic approach to carbon fixation was needed to resolve this impasse. In particular, the biochemical fate of early products would have to be traced, and using a development of the open gas exchange system at Queens, Atkins et al. (1971) supplied 14CO2 in pulse–chase experiments to sunflower leaf tissue under conditions in which photorespiration was operating at high rates (21% O2) or in which it was absent (1% O2). A series of kinetic experiments showed that synthesis of 14C-glycine and 14C-serine was inhibited in low O2 and that the 14C precursor for their synthesis was derived from sugar bisphosphates of the PCR cycle, especially RuBP. Indeed RuBP was the obvious source of glycine carbon atoms and the kinetics of glycine turnover closely matched those of RuBP. As these authors concluded, ‘we can no longer view this (glycolate) pathway as an adjunct to the Calvin cycle but must incorporate it completely into the carbon fixation scheme for photosynthesis’ (Atkins et al. 1971).

The question was finally and most elegantly resolved by Ogren and Bowes (1971) who demonstrated that the carboxylating enzyme of the PCR cycle, RuBP carboxylase, was both an oxygenase and a carboxylase! During normal photosynthesis in air, this enzyme thus catalysed formation of both P-glycolate (the precursor of glycolate) and 3-PGA from the oxygenation of RuBP as well as two molecules of PGA from carboxylation of RuBP. In effect, CO2 and O2 compete with each other for the same active sites for this oxygenation/carboxylation of RuBP, at last providing a biochemical mechanism which had confused and perplexed photosynthesis researchers since the 1920s. This primary carboxylating enzyme of the PCR cycle, which had hitherto rejoiced in a variety of names (carboxydismutase, fraction 1 protein, RuDP carboxylase and RuBP carboxylase), was renamed Rubisco (ribulose-1,5-bisphosphate carboxylase/oxygenase) to reflect its dual activity.

A scheme for the PCR cycle and photosynthetic carbon oxidation (PCO) pathways then represents the synthesis of almost 70 years of research effort, and integrates the metabolism of P-glycolate with the PCR cycle. This is shown in the following section.