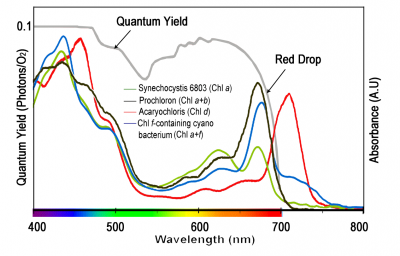 Solar radiation is a black body at a temperature of ~5800oK, covering all spectral regions. However, all known eukaryotic photosynthetic organisms (including plants and algae) are only able to use the same region of the solar spectrum that our eyes are sensitive to, covering the wavelength of 400 – 700 nm region, which is approximately 43% of the total solar radiation. This region is called photosynthetic active radiation (PAR) with estimated photon flux of 1.05 x 1021 photons m-2 s-1. Longer wavelengths up to 1000 nm can drive anoxygenic photosynthesis but not oxygenic (oxygen evolving) photosynthesis. The reason for the high threshold energy for oxygenic photosynthesis is the higher energy requirement for catalysing water oxidation and oxygen evolution in photosynthesis. The PAR input limit depends on the absorption of the photopigments. Chlorophylls a and b, the main chlorophylls in eukaryotic photosynthetic organisms, show their maximal absorption bands in the blue region of 430 - 455 nm and the red region of 645 -670 nm, thus leaving a “green window” and photons outside of “visible region” (Figure 1). The photons collected by chlorophylls a and b provide a strong enough redox potential for the oxidisation of water, while at the same time they also provide an negative enough excited state redox potentials for the reduction of the primary electron acceptor. 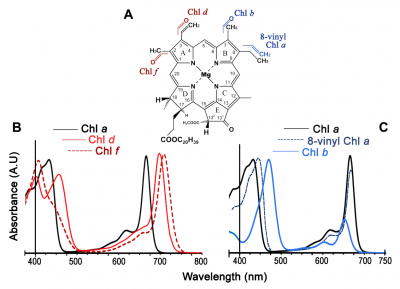 In addition for the potential enhancement for efficient light collection and transfer to the reaction centres under weak irradiation, the second functional demands for the light-harvesting process is their protecting function at exposure to strong light, which will be covered in a following case study.