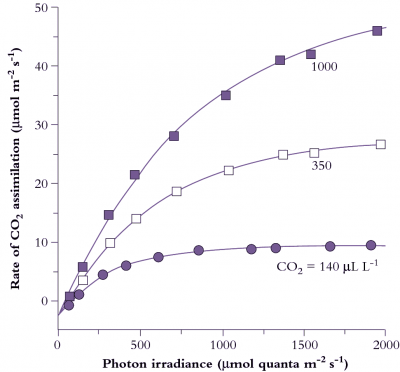 Figure 1.6 Photosynthetic response to photon irradiance for a Eucalyptus maculata leaf measured at three ambient CO2 concentrations, 140, 350 and 1000 µmol mol-1. Irradiance is expressed as µmol quanta of photosynthetically active radiation absorbed per unit leaf area per second, and net CO2 assimilation is inferred from a drop in CO2 concentration of gas passing over a leaf held in a temperature-controlled cuvette. CO2 evolution in darkness is shown on the ordinate as an extrapolation below zero. The irradiance at which net CO2 exchange is zero is termed the light compensation point (commonly 15-50 µmol quanta m-2 s-1, shade to sun species respectively). The initial slope of light-response curves for CO2 assimilation per absorbed quanta represents maximum quantum yield for a leaf. (Based on E. Ögren and J.R. Evans, Planta 189: 182-190, 1993)

Light impinging on plants arrives as discrete particles we term photons, so that a flux of photosynthetically active photons can be referred to as ‘photon irradiance’. Each photon carries a quantum of electromagnetic (light) energy. In biology the terms photon and quantum (plural quanta) tend to be used interchangeably.

CO2 assimilation varies according to both light and CO2 partial pressure. At low light (low photon irradiance in Figure 1.6) assimilation rate increases linearly with increasing irradiance, and the slope of this initial response represents maximum quantum yield (mol CO2 fixed per mol quanta absorbed). Reference to absorbed quanta in this expression is important. Leaves vary widely in surface characteristics (hence reflectance) as well as internal anatomy and chlorophyll content per unit leaf area. Therefore, since absorption of photosynthetically active quanta will vary, quantum yield expressed in terms of incident irradiance does not necessarily reflect the photosynthetic efficiency of the mesophyll. In the case of comparisons between sun and shade leaves, it has led to a widely held but mistaken belief that shade leaves (thinner and with higher chlorophyll content) are more efficient. Expressed in terms of absorbed quanta, sun and shade leaves have virtually identical quantum efficiencies for CO2 assimilation.

Assimilation rate increases more slowly at higher irradiances until eventually a plateau is reached where further increases in irradiance do not increase the rate of CO2 assimilation (Figure 1.6). Chloroplasts are then light saturated. Absolute values for both quantum yield and light-saturated plateaux depend on CO2 concentration. Quantum yield increases as CO2 concentration increases as it competes more successfully with other species such as oxygen, at the binding site on Rubisco. Leaf absorptance has a hyperbolic dependence on chlorophyll content. For most leaves, 80–85% of 400–700 nm light is absorbed and it is only in leaves produced under severe nitrogen deficiency where there is less than 0.25 mmol Chl m–2 that absorptance falls below 75%.

The plateau in Figure 1.6 at high irradiance is set by maximum Rubisco activity. With increasing CO2 partial pressure, the rate of carboxylation increases. The transition from light-limited to Rubisco-limited CO2 assimilation as irradiance increases becomes progressively more gradual at higher CO2 partial pressures. In part, this gentle transition reflects the fact that a leaf is a population of chloroplasts which have different photosynthetic properties depending on their position within that leaf. As discussed above, the profile of photosynthetic capacity per chloroplast changes less than the profile of light absorption per chloroplast (Figure 1.4). This results in an increase in CO2 fixed per quanta absorbed with increasing depth. A transition from a light to a Rubisco limitation therefore occurs at progressively higher incident irradiances for each subsequent layer and results in a more gradual transition in the irradiance response curve of a leaf compared to that of a chloroplast.

Photosynthetic capacity of leaves varies widely according to light, water and nutrient availability and these differences in capacity usually reflect Rubisco content. Leaves in high light environments (‘sun’ leaves) have greater CO2 assimilation capacities than those in shaded environments and this is reflected in the larger allocation of nitrogen-based resources to photosynthetic carbon reduction (PCR cycle; Section 2.1). Sun leaves have a high stomatal density, are thicker and have a higher ratio of Rubisco to chlorophyll in order to utilise the larger availability of photons (and hence ATP and NADPH). Shade leaves are larger and thinner, but have more chlorophyll per unit leaf dry weight than sun leaves. They can have a greater quantum yield per unit of carbon invested in leaves, but with a relatively greater allocation of nitrogen-based resources to photon capture, shade leaves achieve a lower maximum rate of assimilation.

Despite such differences in leaf anatomy and chloroplast composition, leaves sustain energy transduction and CO2 fixation in an efficient and closely coordinated fashion. Processes responsible are discussed below (Section 1.2).