Since shade plants have a lower Pmax than sun plants, they experience more excess light at a given photon irradiance above saturation. Additional stresses such as drought, nutrient limitation or temperature extremes can also lead to a reduction in Pmax and thus increase the probability of plants being exposed to excess light. However, even the most hardy sun plant will reach Pmax at less than full sunlight (incident beam normal to leaf surface). At that level (say, 1000 µmol quanta m–2 s–1), approximately 25% of absorbed energy is used to drive photosynthesis, but at full sunlight (c. 2000 µmol quanta m–2 s–1) as little as 10% is used (Long et al. 1994). Individual leaves on plants growing in full sun commonly experience such excess light intensities. This is potentially damaging, and plants adapted to full sunlight have evolved a number of mechanisms for either avoiding excess light or for dissipating the excess absorbed energy. 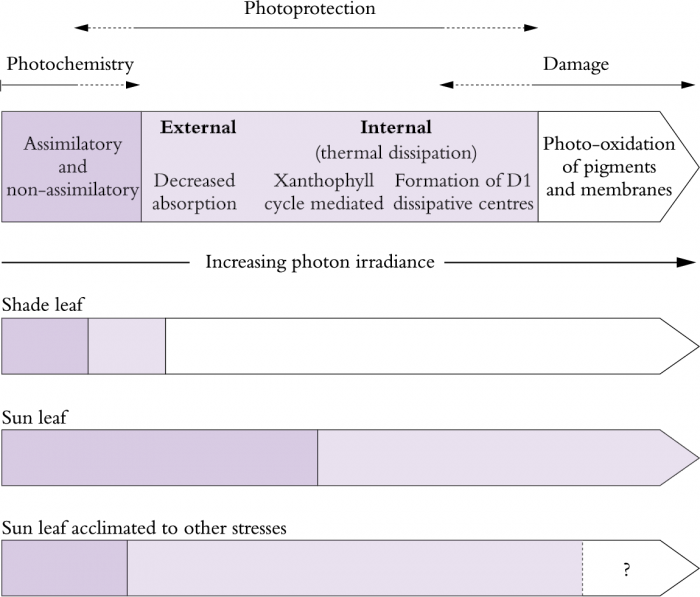 Figure 12.8 As photon irradiance is increased, utilisation of energy gives way progressively to dissipation of energy. Photosynthetic events shift from photochemistry, to external and then internal photoprotection and finally to photodamage. Their comparative importance for shade leaves and sun leaves is indicated. Photoprotection is especially well expressed in sun leaves acclimated to additional environmental and biotic stresses. (B. Demmig-Adams and W.W. Adams, Annu Rev Plant Biol 43: 599-626, 1992)

Mechanisms for avoiding high light interception such as changes in leaf angle and surface features (described above), forestall absorption of excess energy. Rapid responses, such as changes in leaf angle in Oxalis and Omalanthus, occur in a matter of minutes and can regulate light interception on a diurnal basis. Slower-acting mechanisms, including production of wax on leaves, will be useful where there has been a sustained change in the light environment. These kinds of mechanisms constitute external photoprotection (Figure 12.8). 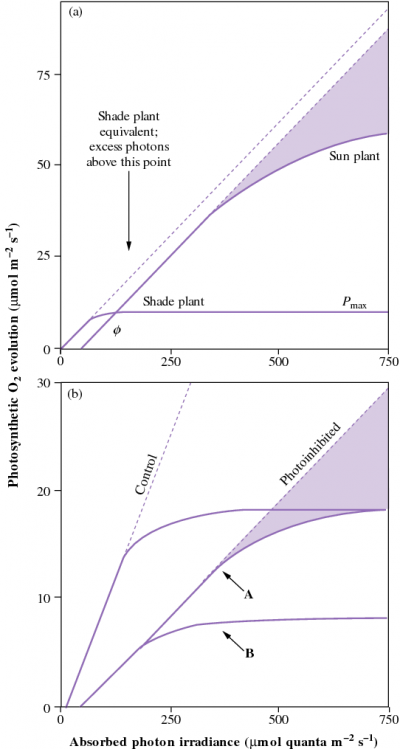 Absorption of excess sunlight as outlined above often leads to photoinhibition of photosynthesis, that is, deﬁned here as a light-dependent decrease in the photon yield of photosynthesis (Figure 12.9). Photoinhibition is one of the most important regulatory mechanisms in photosynthesis, and results from a series of internal photoprotective mechanisms which act to reduce the amount of energy reaching the photochemical reaction centres of photosystem II (PSII). One immediate consequence of reducing light energy to PSII is a reduction in photon yield (expressed in terms of absorbed light).

Shade plants have an even greater need to dissipate excess light interception because they absorb more light (more chlorophyll per unit leaf mass), but need less light to saturate photosynthesis. Prolonged exposure of plants to excess light induces photoprotective processes that reduces the photon yield of photosynthesis, but Pmax remains unchanged (curve A). However, further exposures to excess light will result in both photon yield and Pmax being reduced (curve B). The photosynthetic rate is then reduced at all light levels as a consequence of the photoprotection.

Photoprotection is normally sufﬁcient to cope with light absorbed by leaves; the more extreme photodamage only occurs when the capacity for photoprotection is exhausted. Photodamage is manifested as a decline in both photon yield and Pmax, and recovers very slowly (hours to days), whereas photoinhibition and photoprotection recovers much faster (minutes to hours). Severe photodamage results in bleaching of pigments and damage to membranes (photo-oxidation) and may lead to tissue death. 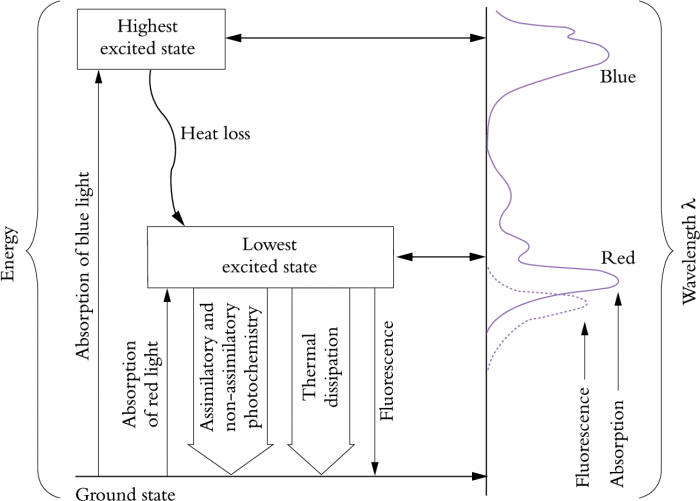 Figure 12.10 Absorption of blue or red light (wavebands corresponding to leaf absorption maxima) leads to excitation of chlorophyll from its ground state. Arrow thickness above indicates comparative importance of each process for energy utilisation.

Consider the alternative fates of light energy absorbed by a leaf and their relevance to photoprotection, photoinhibition and photodamage (Figure 12.10). Although blue light has higher energy and causes excitation to a higher excited state, this energy is quickly lost as heat, and chlorophyll molecules drop to a lower excited state. Utilisation of energy from excited chlorophyll molecules results in either assimilatory or non-assimilatory photochemistry, thermal dissipation or release of light of a longer wavelength (fluorescence). The proportion of absorbed energy consumed by these different processes dictates their comparative signiﬁcance, and in order of importance as protective devices they are:

However, if photochemical capacity is exceeded by incoming energy, a plant will engage photoprotective mechanisms which increase the amount of energy dissipated as heat. This non-photochemical conversion of light energy is thought to occur in the PSII antennae and involves a group of pigments known as xanthophylls and includes violaxanthin, antheraxanthin and zeaxanthin (Figure 12.11). These are a special group of carotenoid pigments which undergo interconversion in response to excess light. Energy is dissipated in the process. In low light, violaxanthin predominates, but when light is in excess, conversion to zeaxanthin via antheraxanthin occurs. This conversion requires a low pH, ascorbate and NADPH. Such conditions exist in the lumen of chloroplasts in high light. Zeaxanthin, and possibly antheraxanthin, provide photoprotective thermal dissipation of the excess light energy. When light levels are no longer excessive, zeaxanthin slowly converts back to violaxanthin via antheraxanthin (Figure 12.11). Total pool sizes of the xanthophyll pigments increase with increasing exposure to excess light. Sun plants can have three- to four-fold larger pools of violaxanthin, antheraxanthin and zeaxanthin than shade plants and the presence of other stresses can also result in increases in pool size. 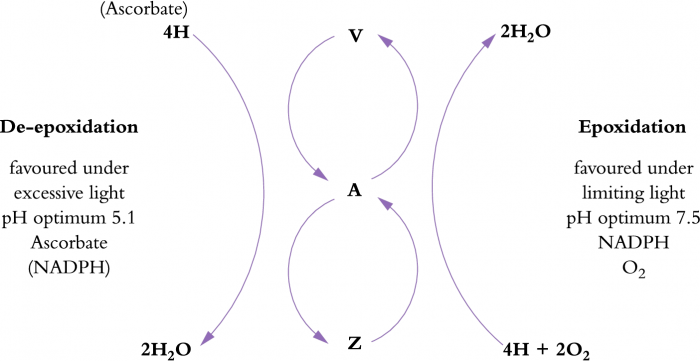 Internal differences between sun and shade leaves with respect to energy dissipation are also apparent in the different patterns of attenuation of light through mesophyll tissues, such as in succulent CAM plants such as Cotyledon orbiculata. There, xanthophylls are mostly found in outermost cell layers where the light environment is strongest. If the reflective wax coating is intact, no internal photoprotection is required at the growth irradiance and there is no zeaxanthin formed. However, if the surface wax (external photo-protection) is removed by hand, internal photoprotection is then needed and zeaxanthin appears in the outermost layer (Figure 12.12). 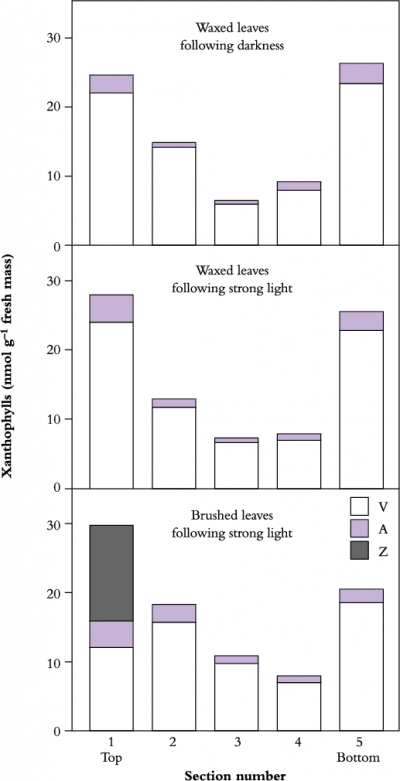 Overall activity of the xanthophyll cycle varies with mesophyll irradiance, while the concentration of particular components also varies according to tissue depth. Changes in concentration of the various components of the xanthophyll cycle are shown here for successive (1 mm) layers in thick leaves of C. orbiculata, with and without their wax coating. In waxed leaves at the end of a dark period (top figure, Figure 12.12) xanthophyll cycle pigments are represented mainly by violaxanthin (V) with a small amount of antheraxanthin (A). After 6 h exposure to high light (middle figure, Figure 12.12) a small amount of violaxanthin is converted to antheraxanthin, but no zeaxanthin (Z) is formed, indicating that the natural wax coating on these leaves is protecting chloroplasts from excess light. Physical removal of surface wax (brushed leaves in bottom figure, Figure 12.12) results in zeaxanthin production within the uppermost layer of leaf tissue but not in deeper tissues or lower surfaces. Restriction of this xanthophyll cycle component to the top section confirms that zeaxanthin accumulation is a response to excess light.
‹ 12.1.1 - Light interception and utilisation up 12.1.3 - Sun/shade acclimation and rainforest gaps ›
Back to top