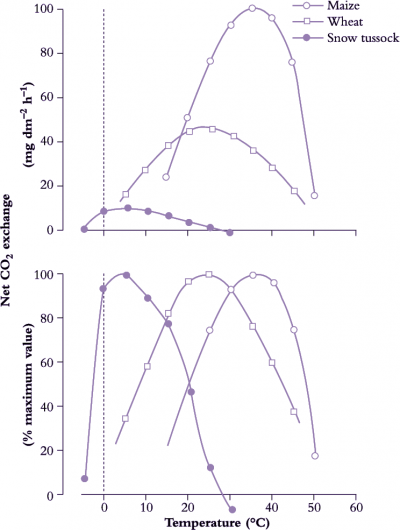 CO2 assimilation underpins plant productivity and is therefore central to any analysis of the response of plants to a change in temperature. In photosynthetic terms, plants can be divided broadly into the groups discussed earlier.

A combination of at least two factors may be associated with the failure of C3 species to respond more favourably to high temperature in terms of CO2 assimilation. One is the limit placed on photosynthesis by ambient CO2 (Figure 14.13), and a second is the concurrent rise with increasing temperature of light-stimulated photorespiration, which is effectively absent from C4 species. Increased atmospheric CO2 inhibits photo-respiration and results in a much greater uptake of CO2 in response to increased temperature in C3 species. 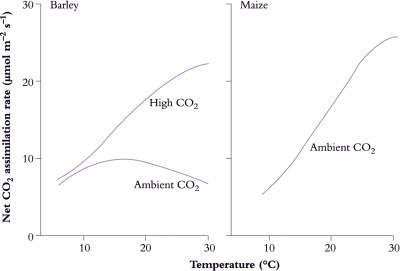 Variation in stomatal resistance could be another factor associated with temperature effects on net assimilation of CO2. Adaptation to high temperature can be related to photosystem II electron transfer, the stability of chloroplast membrane-bound enzyme activities and the stability of the photosynthetic carbon metabolism enzymes that require light for activation. For example, enhanced assimilation of CO2 by rice at high temperature, in comparison with the more temperate C3 species, is associated with a greater response of ribulose-1,5-bisphosphate carboxylase in rice to increasing temperature.

In chilling-sensitive species such as maize, sorghum and mung bean, chlorophyll formation and chlorophyll destruction both occur in light at low temperatures. However, once greening has occurred quite low temperatures (but not usually freezing) can be tolerated as long as these occur during darkness. Low-temperature tolerance is also associated with a high level of strategic enzymes such as Rubisco, protein stability and membrane lipid composition.