Plant and animal membranes have much higher permeability to water than can be explained by diffusion rates through a lipid bilayer. Furthermore, the activation energy for diffusion of water across a plant membrane is lower than would be expected across a lipid bilayer, where water has to overcome the high-energy barrier of partitioning into a very hydrophobic oily layer. Some reports put the activation energy for water flow across membranes as low as the value for free diffusion of water. In other words, water enters the membrane about as readily as it diffuses through a solution. This suggests that water is moving across the membrane through a pathway other than the lipid, perhaps some kind of water pore or water channel. Since the discovery of water channel proteins in animal cell membranes, molecular biologists discovered that similar proteins exist in plants.

The approach to studying water channels has been to inject genetic material from plants into Xenopus oocytes (a particular type of frog’s egg). The Xenopus oocyte is particularly useful because it is large, enabling observations of cell response to foreign proteins. It is one of several expression systems along with Chara (giant algal cells) and yeast cells. cDNA arising from screens of cDNA libraries can be injected into the Xenopus nucleus, or poly (A)+-RNA can be injected into the oocyte cytoplasm where it is translated. Plant water transport proteins expressed in the oocyte plasma membrane result in physiological changes; for example, the oocyte swells rapidly when the external osmotic pressure in the bathing medium is lowered (Figure 3.71a). The ﬁrst plant aquaporin gTIP (Tonoplast Integral Protein) that was discovered occurs in the tonoplast and probably accounts for its high water permeability. Provided that the increase in water permeability is not a consequence of some other change or a side effect of other types of transport, it can be concluded that the protein catalyses transport of water across membranes.

Water channels can be inhibited by mercuric chloride when expressed in Xenopus occytes (Figure 3.71b), and also in plant cells (Figure 3.71c). Inhibition is reversed by applying mercaptoethanol to block the action of HgCl2. Under mercury inhibition, the activation energy of water flow increases markedly indicating that water flow is now restricted to diffusional flow across the lipid bilayer, that is, aquaporins are blocked.

When PIP genes are transcribed, their mRNA is translated in the rough endoplasmic reticulum (ER), and the proteins targeted to the plasma membrane. PIPs belonging to the PIP2 group form homo-oligomers, or hetero-oligomers by associating with PIP1 isoforms. Some PIP2s contain a diacidic motif in their N terminus that acts as an ER export signal. It may be recognized by Sec24 which is the main “cargo” selection protein of the coat protein complex COPII that mediates vesicle formation at the ER export sites. PIP oligomers then transit through the Golgi apparatus and trans-Golgi network and are then loaded into secretory vesicles and routed to the plasma membrane (Figure 3.72). Insertion of PIPs into the plasma membrane is mediated by a protein that regulates vesicle fusion (the “syntaxin” SYP121). The plasma-membrane localized PIPs can be recycled internally: once internalized in vesicles, PIPs are delivered to the trans-Golgi network before being routed back to the plasma membrane or directed into lytic vacuoles for degradation (Figure 3.72). Salt stress causes dephosphorylation and internalization of PIPs, and drought stress induces ubiquitylation of PIPs, which are then degraded in the proteasome.

Aquaporins assemble as homo- or hetero-tetramers, each monomer acting as an independent water channel. The structure of an aquaporin monomer (Figure 3.72) consists of six membrane-spanning α-helices connected by five loops, with both N and C termini facing the cytosol. Two loops form two short hydrophobic α-helices dipping halfway into the membranes, which, together with the membrane-spanning helices, create a pore with high specificity (Murata et al. 2000). 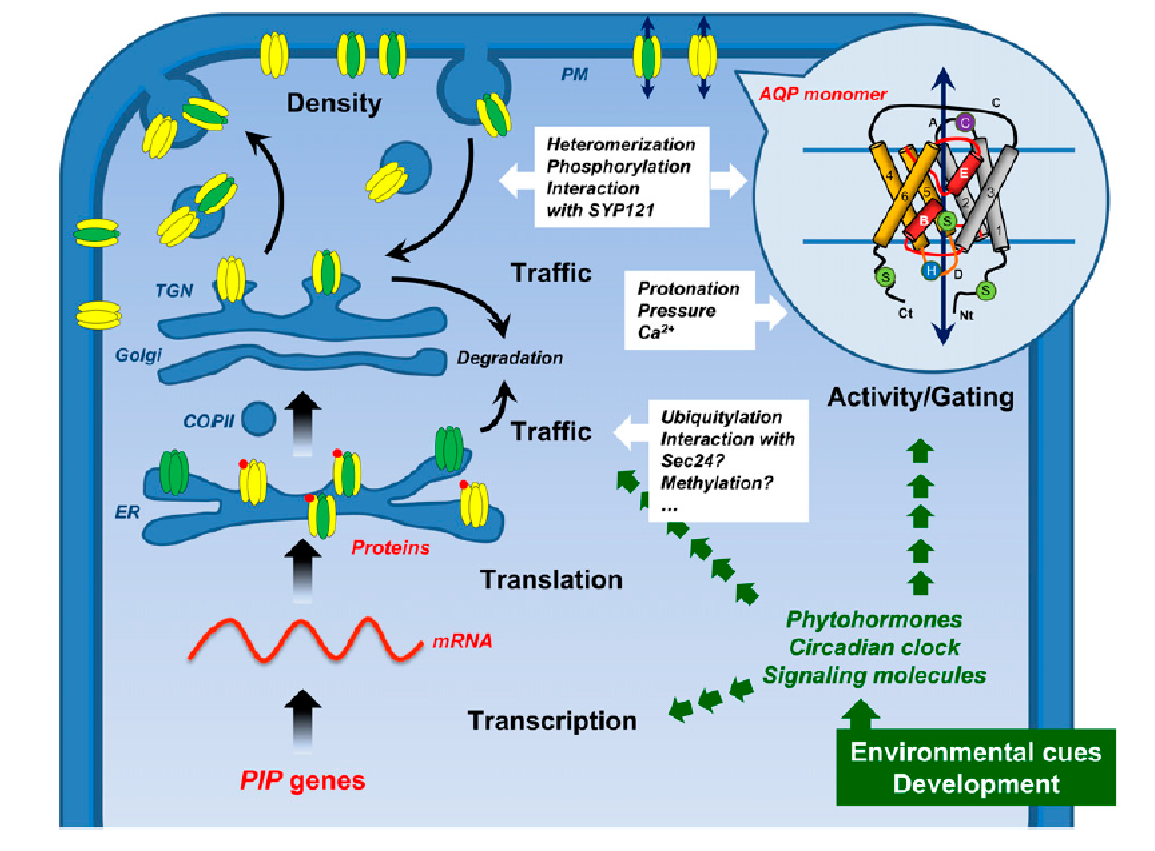 Figure 3.72 Formation and trafficking of PIPs within a plant cell. PIPs belonging to the PIP2 group (in yellow) form homo- or heterooligomers by associating with PIP1 isoforms (in green). PIP oligomers transit through the Golgi apparatus and trans-Golgi network (TGN) and are then loaded into secretory vesicles and routed to the plasma membrane. In the circle is shown the topological structure of the aquaporin monomer AQP1 (Murata et al. 2000), with six membrane-spanning α-helices (1-6) connected by five loops (A-E). The loops B and E form two short hydrophobic α-helices (in red) dipping halfway into the membranes, which, together with the membrane-spanning helices, create a pore with high specificity. From Chaumont and Tyerman (2014). Reproduced from F. Chaumant and S.D. Tyerman, Plant Phys 164: 1600-1618, plantphysiol.org. Copyright American Society of Plant Biologists.

Aquaporins play a central role in regulating plant water relations. Water diffusion across cell membranes is facilitated by aquaporins that provide plants with the means to rapidly and reversibly modify water permeability. This is done by changing aquaporin density and activity in the membrane, including post-translational modifications and protein interaction that act on their trafficking and gating. At the whole organ level aquaporins modify water conductance and gradients at key “gatekeeper” cell layers that impact on whole plant water flow and plant water potential. In this way they may act in concert with stomatal regulation.

PIP and TIP expression is higher during the day than the night, and correlates with diurnal changes in transpiration. It is likely under circadian regulation. Expression can correlate with changes in hydraulic conductivity, Lp, so that aquaporins are more abundant or have higher activity at times when stomatal conductance is higher. Over a diurnal cycle, Lp can change 2-5 fold and so can PIP transcript activity or protein abundance (Chaumant and Tyerman 2014). This occurs in both roots and shoots.

This section has shown how the flow of water and ions across membranes are linked. The function of membrane transport in regulating nutrient supply is covered in Chapter 4.