3.5 - Water and nutrient transport through roots 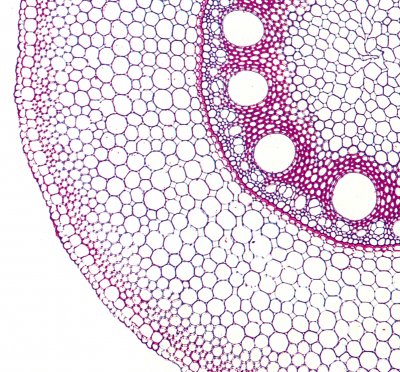 Water and nutrients travel radially across roots from the soil to the xylem vessels and from there, they travel axially to the shoot. Anatomical and morphological features determine how effective roots are at absorbing and transporting water and nutrients from the soil to the shoot. Root tissue needs to form a low resistance pathway for transport, but also minimise the loss of water to the soil under adverse conditions.

The complexity of the root tissue that water and nutrients must cross is shown below in Figure 3.46. Notable features are the many layers of cortical cells, and the stele containing large and small xylem vessels. The stele is enclosed by the endodermis, a cell layer that contains deposits of suberin and lignin in the anticlinal walls between cells, called a Casparian strip, which blocks diffusion of water and solutes from the cortex into the stele. All roots have an endodermis, except at the tip where they are still growing.

Figure 3.46 also shows a layer of cells beneath the epidermis, which is often suberised and called exodermis. The suberin forms in older roots of many species or under drought conditions. Water and solutes cannot flow across the suberised cells of the exodermis and are restricted to passage cells that are not suberised.

Across the cortex, water could flow along cells walls and through interstitial spaces, the so-called apoplastic route. Alternatively it could enter the epidermal or hypodermal layer and flow symplastically across the cortex. Another alternative is the transmembrane (or transcellular) route. These three pathways are described in the following section. The solutes in the soil solution may also take the same route, or move independently of water.