Most photoassimilates travel along one of three cellular pathways: apoplasmic, symplasmic or a combination of both with symplasmic transport interrupted by an apoplasmic step (Figure 5.19). 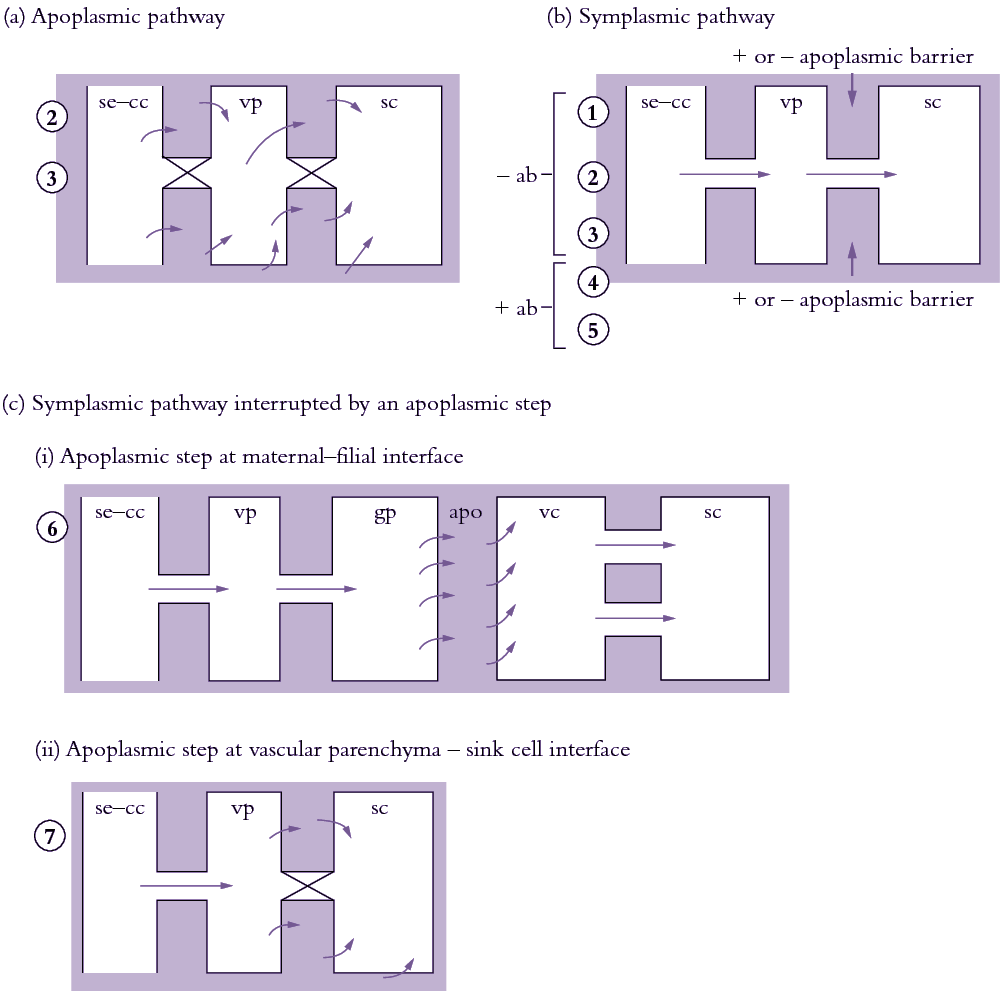 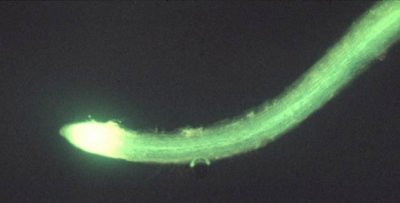 Figure 5.19. Fluorescent micrograph of the distribution of a membrane-impermeant fluorescent dye, carboxyfluorscein (CF), imported through the phloem into roots of French bean (Phaseolus vulgaris L.). The green/yellow fluorescence of CF is confined to the se-cc complexes of mature portions of roots as seen by the thin central band of fluorescence away from the root apex. In contrast, dye spreads through the apex itself apparently via the symplasm of young cells. Scale bar = 2 mm

Photoassimilates can move directly across plasma membranes of se–cc complexes to the surrounding apoplasm (Figure 5.19a). Apoplasmic unloading is important along the axial transport pathway of roots and stems where vascular parenchyma and ground tissues serve as reversible storage sinks.

An entirely symplasmic path of photoassimilate transport from sieve elements to recipient sink cells (Figure 5.18b) operates in a wide range of morphological and metabolic sink types. Terminal growth sinks such as root (Figure 5.19) and shoot apices, as well as vegetative storage sinks such as stems, roots and potato tubers, demonstrate symplasmic unloading.

In most sinks that exhibit symplasmic unloading, photo-assimilates are metabolised into polymeric forms within the recipient sink cells. Sugar cane is a notable exception because it stores sucrose unloaded symplasmically from sieve elements in parenchyma cells of stems. Stem sucrose reaches molar concentrations by this unloading route.

Symplasmic discontinuities exist at interfaces between tissues of differing genomes including biotrophic associations (e.g. mycorrhizas and mistletoes) and developing seeds (Figure 5.18c). In addition, within tissues of the same genome, plasmodesmata can close permanently or reversibly at points along the post-sieve-element pathway. This necessitates photoassimilate exchange between symplasmic and apoplasmic compartments (Figure 5.18c). For instance, photoassimilate exchange between apoplasm and symplasm has been detected in sinks that store high solute concentrations and have unrestricted apoplasmic transport between vascular and storage tissues. Developing seeds, particularly of cereals and large-seeded grain legumes (Patrick and Offler 1995), are another model for symplasmic/apoplasmic pathways.

The apoplasmic space between maternal (seed coat) and filial (embryo plus endosperm) tissues in seeds prevents symplasmic continuity in the unloading pathway (Patrick and Offler 1995). In these organs, photoassimilates are effluxed across membranes of maternal tissues and subsequently taken up across the membranes of filial tissues (Figure 5.18c). Photoassimilates are unloaded from sieve elements and transported symplasmically to effluxing cells where they are released to the seed apoplasm. Influx from the seed apoplasm by the filial generation is restricted to specialised cells located at the maternal–filial interface. The final transport of photoassimilates to the filial storage cells largely follows a symplasmic route.

The symplasm is the most frequently engaged cellular pathway of phloem unloading. Even where an apoplasmic step intervenes (e.g. developing seeds), photoassimilates travel predominantly through the sink symplasm (Figure 5.18c). Symplastic routes do not involve membrane transport and therefore offer lower resistances than apoplasmic routes.

Apoplasmic pathways are restricted to circumstances where (1) symplasmic transport compromises phloem translocation and (2) photoassimilate transport is between genetically distinct (e.g. maternal–filial) tissues. Phloem translocation would be compromised when solutes accumulate to high concentrations in sink cells were it not avoided by symplasmic isolation of phloem from sinks. This is exemplified by the switch to an apoplasmic step during development of tomato fruit. In young fruit, imported sugars are converted into glucose or fructose to support cell division and excess photoassimilate is accumulated as starch. At this stage, phloem unloading of photoassimilates follows a symplasmic route (Figure 5.18b). However, once sugars commence accumulating during cell expansion, apoplasmic transport is engaged (Figure 5.18c). The apoplasmic path isolates pressure-driven phloem import from rising osmotic pressures (P) occurring in fruit storage parenchyma cells (Patrick and Offler 1996).