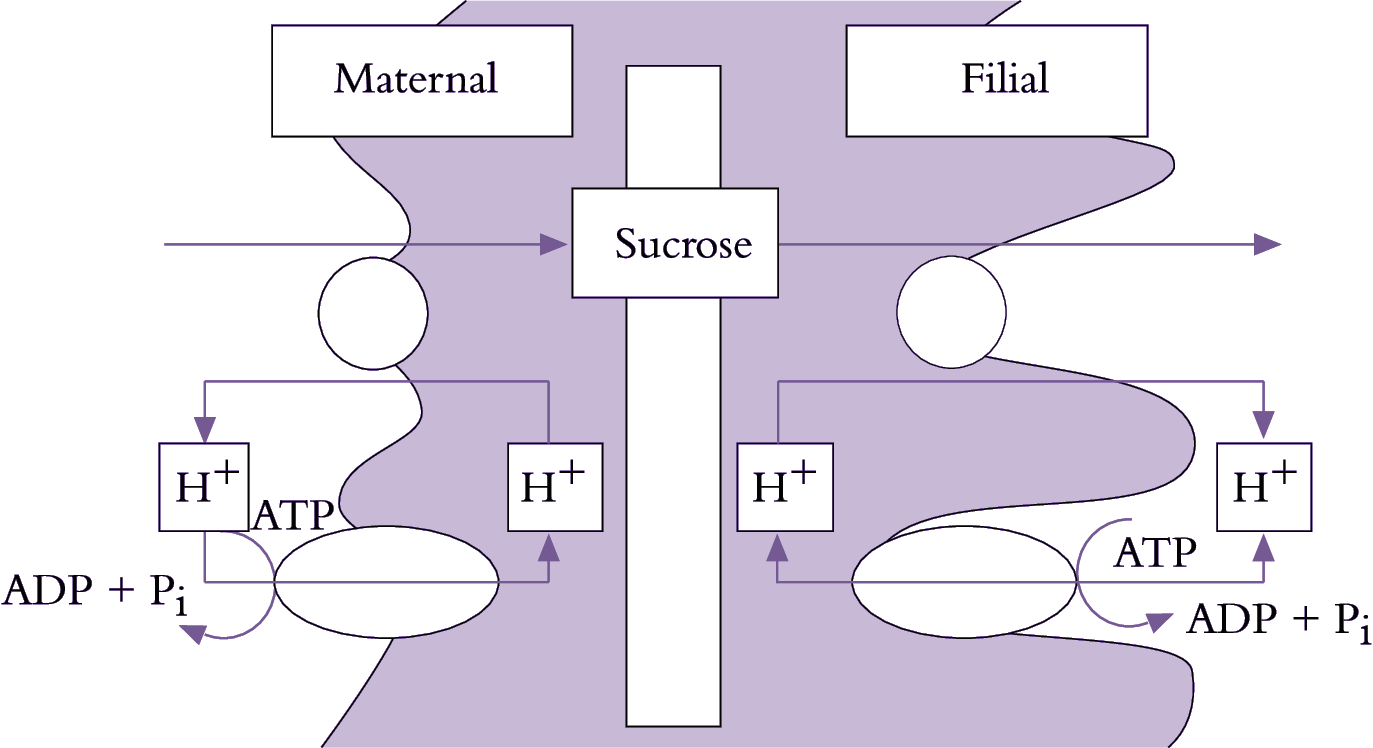 Figure 5.20. Mechanistic model for plasma membrane transport of sucrose from the coat and into the cotyledons of a developing legume seed. Plasma membrane ATPases vectorially pump protons to the seed apoplasm from both the opposing seed coat and cotyledon cells. The proton gradient is coupled to drive sucrose efflux from the seed coats through a sucrose/proton antiporter and sucrose influx into the cotyledons by a sucrose/proton symporter.

Se–cc complexes contain high sugar concentrations (Section 5.2.3(b)). Thus, a considerable transmembrane concentration gradient exists to drive a passive leakage of sugars to phloem apoplasm. Sugars leaked to phloem apoplasm are often retrieved by an active sucrose/proton symport mechanism (Figure 5.20). Thus, net efflux of sugars from se–cc complexes is determined by the balance between a passive leakage and sucrose/proton retrieval. 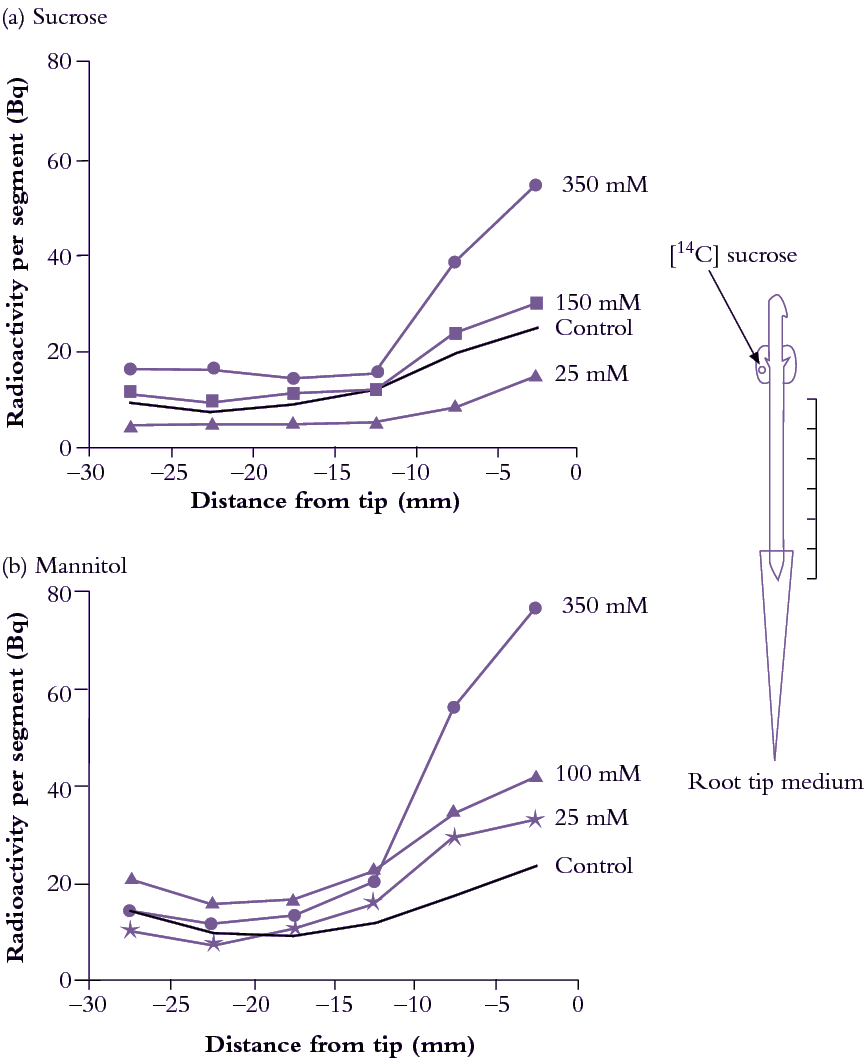 Figure 5.21. Externally supplied solutes have a marked effect on sucrose import into root tips of hydroponically grown pea seedlings. This was tested by immersing root tips in (a) sucrose or (b) mannitol solutions ranging up to 350 mM. Cotyledons, which supply these young roots with carbon, were fed 14C sucrose and 14C arriving in different root parts was measured (Bq per root segment). (a) Import of 14C into root tips was diminished when they were exposed to external sucrose concentrations of less than 100 mM but promoted by sucrose concentrations of 150 to 350 mM; Two effects operate. At low concentrations, sucrose might enter root tip cells and suppress phloem import by a feedback mechanism. At higher concentrations, sucrose might act mainly as an osmoticum (see (b)). Mannitol is not taken up or metabolised quickly and can therefore help answer these questions. (b) Import through the phloem was stimulated by exposing root tips to the slowly permeable sugar mannitol, at concentrations of from 13 to 350 mM. This demonstrates an osmotic dependence of import through the phloem pathway, presumably through progressively decreasing P of root tip cells as external solute concentrations rise (Based on Schultz 1994)

Symplasmic transport is mediated by cytoplasmic streaming in series with intercellular transport via plasmodesmata. Plasmodesmal transport is usually the overriding resistance determining transport rates between cells.

Root tips offer a useful experimental model to explore post-sieve-element symplasmic transport because of morphological simplicity and accessibility. Exposing pea root tips to low sucrose concentrations (<100mM) slowed photoassimilate accumulation (Figure 5.21a) by raising intracellular sucrose concentrations. This response to concentration gradients is consistent with a diffusion component to phloem unloading (Equation 5.7). When roots were bathed in much higher concentrations of either sucrose (Figure 5.22a) or a slowly permeating solute, mannitol (Figure 5.33b), turgor pressure (P) of sieve elements and surrounding tissues decreased and 14C import rose. This is consistent with a hydraulically driven (bulk) flow of photoassimilates into the root apex. Thus, photoassimilate movement from phloem through a symplasmic path can be mediated by diffusion and/or bulk flow. The relative contribution of each transport mechanism depends on the magnitude of concentration and pressure gradients (Equations 5.6 and 5.8).

Physical laws can be used to model diffusion and bulk flow of sucrose through a symplasmic route. Sucrose diffuses through symplasm at a rate (Rd) defined by the product of plasmodesmal number in the path (n), plasmodesmal conductivity to diffusion (Kd) and sucrose concentration difference (ΔC) between sieve elements and sink cell cytoplasm. That is:

Transport by bulk flow (Rf) is determined by the product of flow speed (S), cross-sectional area of the plasmodesmal flow path (A) and concentration (C) of sucrose transported (Equation 5.2). Flow speed (S), in turn, is a product of hydraulic conductivity (Lp) of a plasmodesma and turgor pressure difference (ΔP) between se–cc complexes and recipient sink cells (Equation 5.8). Flow over the entire pathway considers the number of interconnecting plasmodesmata (n). Thus, bulk flow rate (Rf) is given by:

Figure 5.22. Cellular distribution of the apoplasmic tracer fluorescent dye 3-hydroxy—5,8,10—pyren—etrisulphonate (PTS) imported through the xylem in stem explants of sugar cane. (Left) Fluorescent micrograph of a longitudinal section of a stem with PTS (green fluorescence) localised to the vascular bundle. (Right) Fluorescent micrograph of a transverse section showing PTS confined to the vascular bundle. Retention of PTS in vascular bundles demonstrates that a barrier to lateral dye movement must be located in the walls of bundle sheath cells (bs). (Based on Jacobsen et al. 1992) 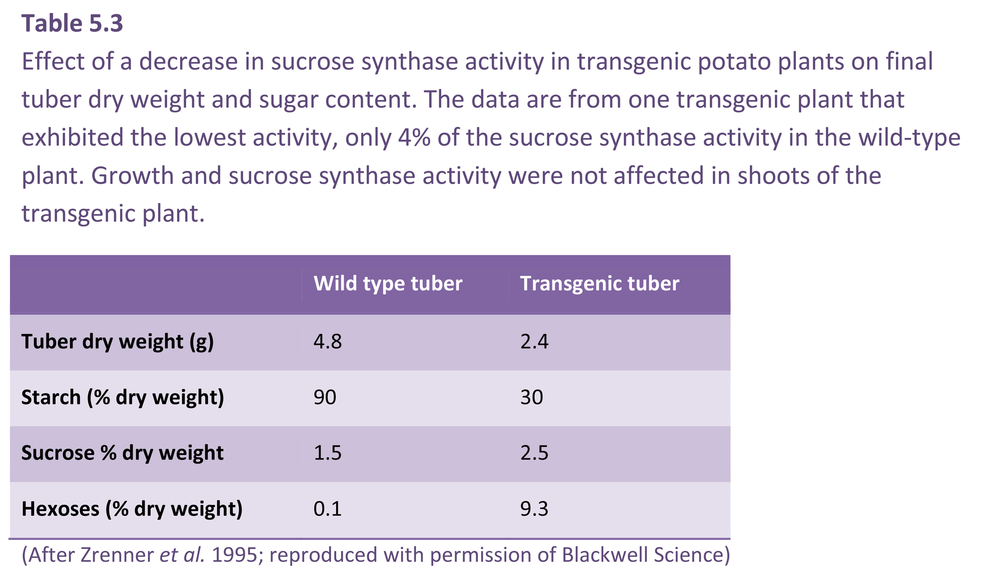 Transgenic plants which under- or over-express key sugar metabolising enzymes have allowed definitive experiments to be carried out on the role of sucrose metabolism in symplasmic phloem unloading. For example, reduction of sucrose synthase activity (Section 5.4.4) in tubers of transformed potato to 5–30% of wild-type levels depressed dry weight of tubers and starch biosynthesis (Table 5.3). Tubers of transformed plants had very high hexose levels (hence high P) which might contribute to downregulation of photoassimilate import. As a corollary, plants with enhanced starch biosynthesis through overexpression of the key starch synthesising enzyme, ADP-glucose pyrophosphorylase (Section 5.4.5), also had higher rates of photoassimilate import.

For sinks that store sugars to high concentrations (e.g. sugar cane stems), gradients in Π, and hence P, between se–cc complexes and sink storage cells could become too small to sustain transport. Instead, P in the apoplasm of storage tissues increases as sucrose (hence Π) in the storage cell sap rises. This maintains a lower P in storage cells than in sieve elements and sustains transport. High sucrose concentrations in the apoplasm of storage cells is achieved through an apoplasmic barrier which isolates storage parenchyma cells from sieve elements (Figure 5.22). 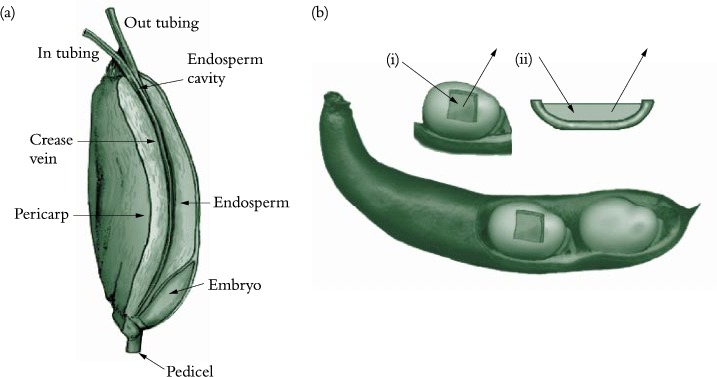 Figure 5.23. Experimental systems used to determine sucrose fluxes in (a) attached caryopses of wheat and (b) coats of developing legume seed. In (a), sucrose effluxed from the maternal tissues was collected by infusing the endosperm cavity of an attached wheat grain with solutions delivered and retrieved through micro-capillaries (Wang and Fisher 1994). In (b), embryos are surgically removed from the coats which may be (i) attached to or (ii) detached from the pod wall. The space vacated by the embryo is filled with a wash solution that is changed at frequent intervals. The wash solution is used to deliver treatments to the seed coat and as a trap to collect the effluxed sucrose.

Phloem unloading in legume seed pods is one case of symplasmic and apoplasmic transport operating in series; the pathway is described in Section 5.4.2(c). Whether sucrose efflux requires energy remains unknown since concentration gradients between seed coats and apoplasm might be steep enough to drive facilitated diffusion. Indeed, using an elegant infusion technique (Figure 5.23a), Wang and Fisher (1994) concluded that efflux from the nucellar projection cells of wheat grain was unlikely to be energy dependent. In contrast, sucrose efflux from coats (maternal tissue) of surgically modified legume seeds (Figure 5.23b) is inhibited by about 50% in the presence of PCMBS, a membrane transport inhibitor. Efflux from legume seed coat cells exhibits charac-teristics of a sucrose/proton antiport. Sucrose uptake by filial tissues is mediated by sucrose/proton symport (Figure 5.23).

A fascinating aspect of phloem unloading in legume seed pods is how photoassimilate demand by filial tissues is integrated with supply from maternal tissues, itself an integration of photoassimilate efflux and import from phloem. One variable that could regulate rates of photoassimilate transport through seed coat symplasm and efflux into apoplasm of the maternal–filial interface is P of seed coat cells (Psc): this would sense depletion of apoplasmic sucrose through uptake by cotyledons, producing a signal in the form of a ΔPsc (Figure 5.24). Speciﬁcally, Psc is determined by ΔΠ between the seed coat (Πsc) and seed apoplasm (Πapo), which fluctuates according to photoassimilate withdrawal by cotyledons.

A pressure difference (ΔP) between the points of photo-assimilate arrival (sieve tubes) and efflux (seed coats) drives bulk flow of photoassimilates through the seed coat symplasm. Turgor pressure of seed coat efflux cells is maintained homeostatically at a set point (Pset) by P-dependent efflux into the seed apoplasm. Changes in apoplasmic assimilate concentrations and hence Π are sensed immediately as deviations of Psc from Pset. A rise in Psc produced by photoassimilate depletion around filial tissues elicits an error signal, activating P-dependent solute efflux (Figure 5.25b) and thereby raising photoassimilate concentrations in the apoplasm to meet demand by cotyledons (Figure 5.24c). Long-term increases of sucrose influx by cotyledons, for example over hours, are accompanied by adjustments in Pset (light to dark arrows in Figure 5.24b) which elicit commensurate increases in phloem import rates (light to dark arrows in Figure 5.24a). 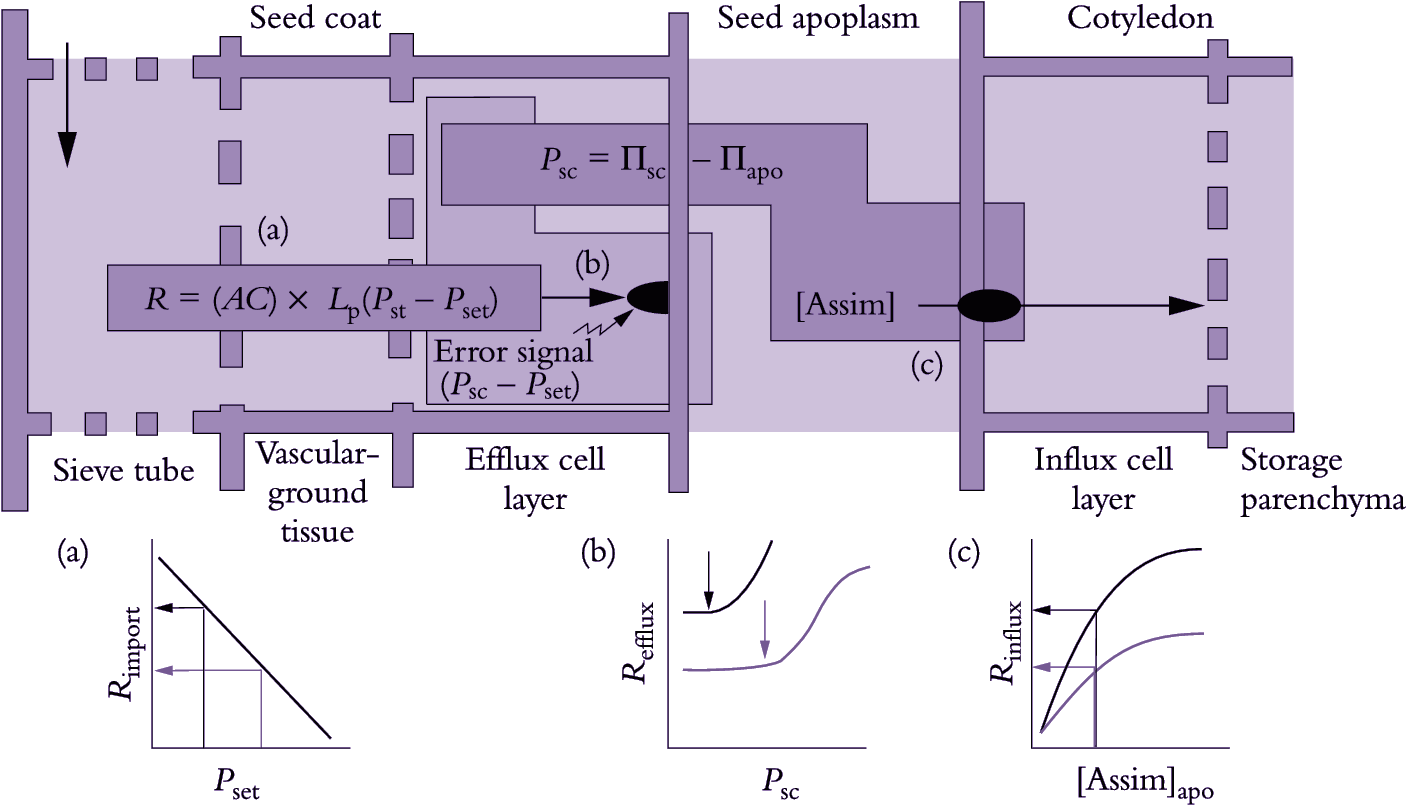 Figure 5.24. A turgor-homeostat model describing the integration of photoassimilate transport to developing legume seeds. Photoassimilate import through phloem (a) and efflux from seed coat to seed apoplasm (b) is mediated by a turgor (P)-dependent efflux mechanism and uptake of sugars by cotyledons (c). Metabolic activity in growing seeds influences sucrose concentrations within cotyledon cells, possibly feeding back on activities of symporters located in plasma membranes of the cotyledon dermal cell complex. Graph (c) denotes increased influx (R) from light to dark curve as sugar demand increases. The apoplasmic solute pool size is small and turns over in less than one hour (Patrick and Offler 1995). Thus, faster photoassimilate withdrawal from the seed apoplasm by cotyledons will rapidly lower apoplasmic osmotic concentration. Since the osmotic difference between seed apoplasm (Πapo) and seed coat (Πsc) is only 0.1-0.2 MPa, a small decrease in osmolality of the apoplasm will elicit a significant increase in seed coat P (Psc).A shift in Psc above the turgor set point (Pset) results in an error signal (see model) which in turn induces an immediate compensatory increase in photoassimilate efflux to the apoplasm (light curve in graph b). Increased photoassimilate efflux acts to maintain a constant Πapo in spite of enhanced flux through the apoplasm (graph c). Consequently, the increased potential for photoassimilate uptake by cotyledons can be fully realised (dark curve in graph c). In the short term (minutes), the turgor-homeostat ensures that Psc is maintained and hence phloem import, which is driven by the turgor difference between sieve tubes and unloading cells (Pst- Psc) is also maintained. Under conditions where cotyledon demand is sustained, Pset in the seed coat adjusts downwards. This results from decreases in Πsc, while Πapo is homeostatically maintained. The decrease in Pset of efflux cells serves to enhance the pressure difference between these cells and the importing sieve elements. As a result, the rate of phloem import into seed coats (Rimport) is increased (graph a, light to dark curve). This new rate of import is commensurate with accelerated sucrose efllux from seed coats to the apoplasm (graph b, light to dark curve) and, ultimately, cotyledons.

‹ 5.4.1 - Cellular pathways of phloem unloading up 5.4.3 - Sugar metabolism and compartmentation in sinks ›
Back to top