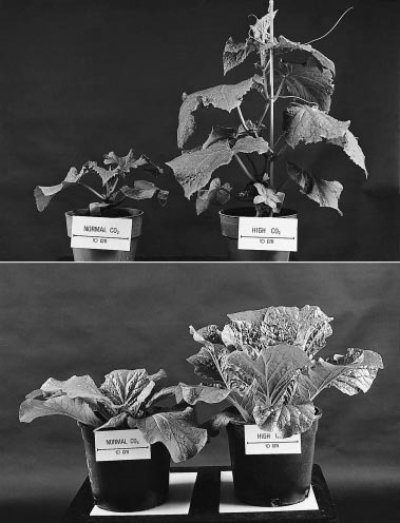 Growth responses to elevated CO2 can be spectacular, especially during early exponential growth (Figure 6.4) and derive largely from direct effects of increased CO2 partial pressure on photosynthesis. C3 plants will be most affected, and especially at high temperature where photorespiratory loss of carbon has the greatest impact on biomass accumulation.

Global atmospheric CO2 partial pressure is expected to reach 60–70 Pa (600–700 ppm) by about 2050 so that growth response to a CO2 doubling compared with 1990s levels has received wide attention. Instantaneous rates of CO2 assimilation by C3 leaves can increase two- to three-fold in response to such elevated levels of CO2, but the short-term response is rarely translated into biomass gain by whole plants where growth and reproductive development can be limited by low nutrients, low light, low temperature, physical restriction on root growth (especially pot experiments) or strength of sinks for photoassimilate. Given such constraints, photosynthetic acclimation commonly ensues. Rates of CO2 assimilation (leaf area basis) by CO2-enriched plants, grown and measured under high CO2, will match rates measured on control plants at normal ambient levels. 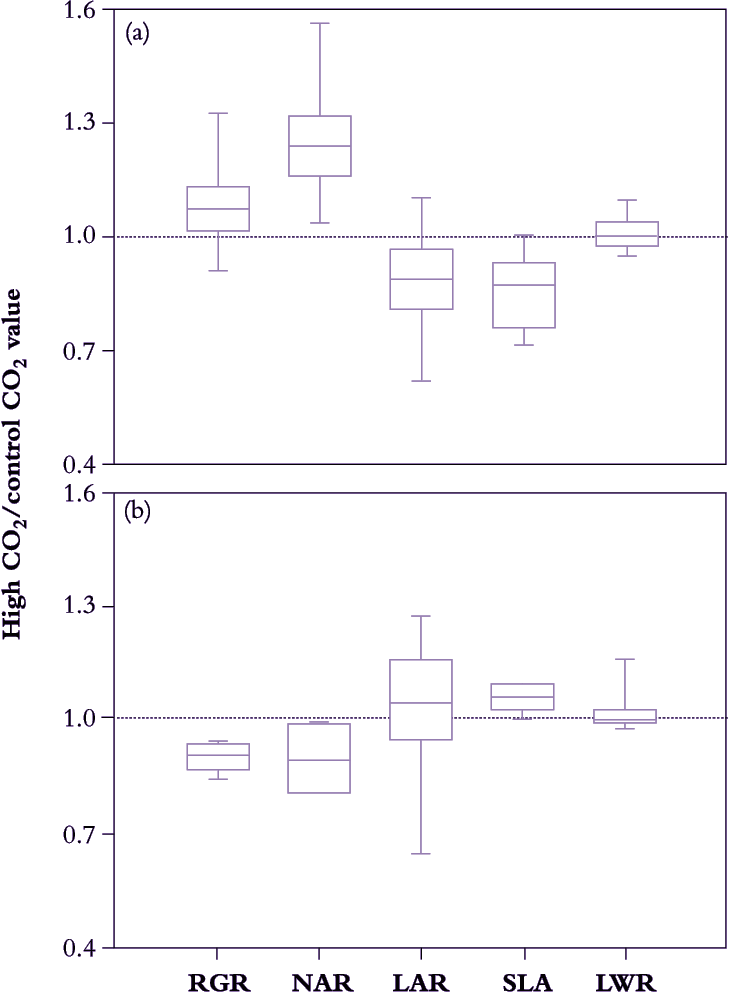 Figure 6.5. A survey of growth response to elevated CO2 (ratio of growth indices in 600-800 cf. 300-400 ppm CO2) in 63 different C3 species (a) and eight C4 species (b) reveals systematic differences in median values for growth indices that relate to photosynthetic mode. C3 plants show a positive response in NAR that results in slightly faster RGR despite some reduction in LAR. C4 plants reduce RGR under elevated CO2 due to diminished NAR. SLA of C3 plants is generally lower under elevated CO2, but increased somewhat in C4. LWR is essentially unchanged in either group (Based on Poorter et al. 1996)

Acclimation takes only days to set in, and because plant growth analysis commonly extends over a few weeks, CO2-driven responses in growth indices tend to be more conservative compared with instantaneous responses during leaf gas exchange. C4 plants will be less affected than C3 plants (see Chapter 2) so that broad surveys need to distinguish between photosynthetic mode. For example, in Figure 6.5, average NAR for 63 different cases of C3 plants increased by 25–30% under 600–800 ppm CO2 compared with corresponding values under 300–400 ppm CO2. However, NAR increase was not matched by a commensurate response in RGR, and decreased LAR appears responsible. CO2-enriched plants were less leafy than controls (i.e. lower LAR), but not because less dry matter was allocated to foliage (LWR was on average unaltered). Rather, specific leaf area (SLA in Figure 6.5) decreased under high CO2 so that a given mass of foliage was presenting a smaller assimilatory surface for light interception and gas exchange. Accumulation of non-structural carbohydrate (mainly starch; Wong 1990) is commonly responsible for lower SLA in these cases, and in addition generally correlates with down-regulation of leaf photosynthesis. 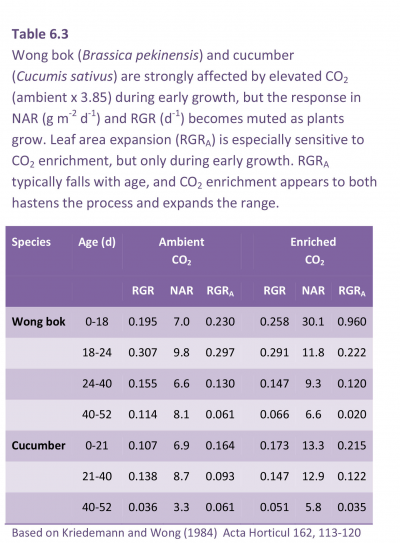 By contrast, in C4 plants LWR was little affected by elevated CO2, but in this case SLA did show slight increase with some positive response in LAR. However, photosynthetic acclimation may have been more telling because NAR eased and RGR even diminished somewhat under elevated CO2.

Global change, with attendant increase in atmospheric CO2 over coming decades, thus carries implications for growth and development in present-day genotypes and especially the comparative abundance of C3 and C4 plants. Elevated CO2 also has immediate relevance to greenhouse cropping. In production horticulture, both absolute yield and duration of cropping cycles are factors in proﬁtability. Accordingly, CO2 effects on rate of growth as well as onset of subsequent development are of interest.

Young seedlings in their early exponential growth phase are typically most responsive to elevated CO2, so that production of leafy vegetables can be greatly enhanced. This response is widely exploited in northern hemisphere greenhouse culture. In commercial operations, ambient CO2is often raised three- to four-fold so that growth responses can be spectacular (Figure 6.4) but they tend to be short lived (Table 6.3), as accelerated early growth gives way to lower RGR. During each cycle of growth and development, annual plants show a sigmoidal increase in biomass where an initial exponential phase gives way to a linear phase, eventually approaching an asymptote as reproductive structures mature. If CO2 enrichment hastens this progression, a stage is soon reached where RGR is lower under elevated CO2 due to accelerated ontogeny.

The fall in RGR with time of exposure to high CO2 is illustrated for wong bok (Brassica pekinensis) in Table 6.3. Wong bok is a highly productive autumn and winter vegetable that serves as ‘spring greens’ and is especially responsive to CO2 during early growth. RGRA at c. 330 ppm CO2 was initially 0.230 d–1 compared with 0.960 d–1 at c. 1350 ppm CO2, but by 40–52 d, RGRA had fallen to 0.061 and 0.020 d–1 for control and CO2 enriched, respectively (Table 6.3). CO2-driven response in NAR and RGR also diminished with age, and especially where these larger individuals failed to sustain higher RGR past 18 d (Table 6.3). Nevertheless, a response in NAR was maintained for a further two intervals so that a CO2 effect on plant size was maintained (Figure 6.4).

Component analyses of RGR as exemplified above are also useful for analysing whole plant responses to the supply of various nutrients and to interactions between nutrient supply and light, temperature or CO2. There are also strong interactions between these ambient conditions and abiotic stresses such as drought and salinity that can be quantitatively analysed.

The following two sections consider the developmental stages of leaf, shoot and reproductive organ formation, and how this information contributes to different types of quantitative growth analyses.