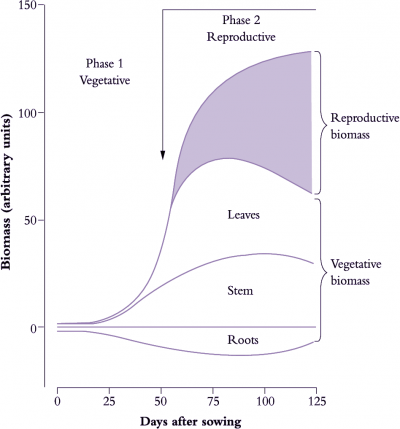 Figure 6.13. A notional distribution of biomass during the vegetative growth and reproductive development in an idealised annual plant such as a cereal or grain legume over c. 125 d. Whole-plant biomass follows a sigmoidal pattern with a near-exponential increase during vegetative growth and an asymptotic increase during subsequent maturation. Reproductive structures have by then become dominants sinks for photoassimilate, drawing 90-95% of their carbon from current photosynthesis but also mobilising stored assimilate from leaves, stems and roots, which lose biomass during that process (Original drawing P.E. Kriedemann; based on various sources)

Annual plants show a sigmoidal increase in total biomass during each life cycle (Figure 6.13) where a near-exponential vegetative phase (Phase 1) gives way to a reproductive phase (Phase 2) starting with flower initiation. In effect, Phase 1 sets a potential for reproductive yield whereas events during Phase 2 determine realisation of that potential because nearly all of the photoassimilate stored in reproductive structures (90–95% in cereal grains, for example) comes from carbon fixed subsequent to initiation. Reproductive organs then become dominant sinks for current photoassimilate as well as carbon-based resources previously stored in leaves and stems.

The carbon content of shoot components changes dramatically following onset of reproductive development. As shown for lupin in Figure 6.14, the dynamic balance between leaves and stem that had been previously maintained during vegetative growth is now replaced by an accelerated senescence of leaves and loss of non-structural carbohydrates from leaves plus stems to provide assimilates for the developing pods. At full maturity, reproductive structures in lupin account for about 50% of above-ground biomass, with seeds accounting for about two-thirds of that investment (Figure 6.14). In most grain or seed crops, the mature reproductive structure accounts for 50% of the above-ground biomass (Table 6.4). 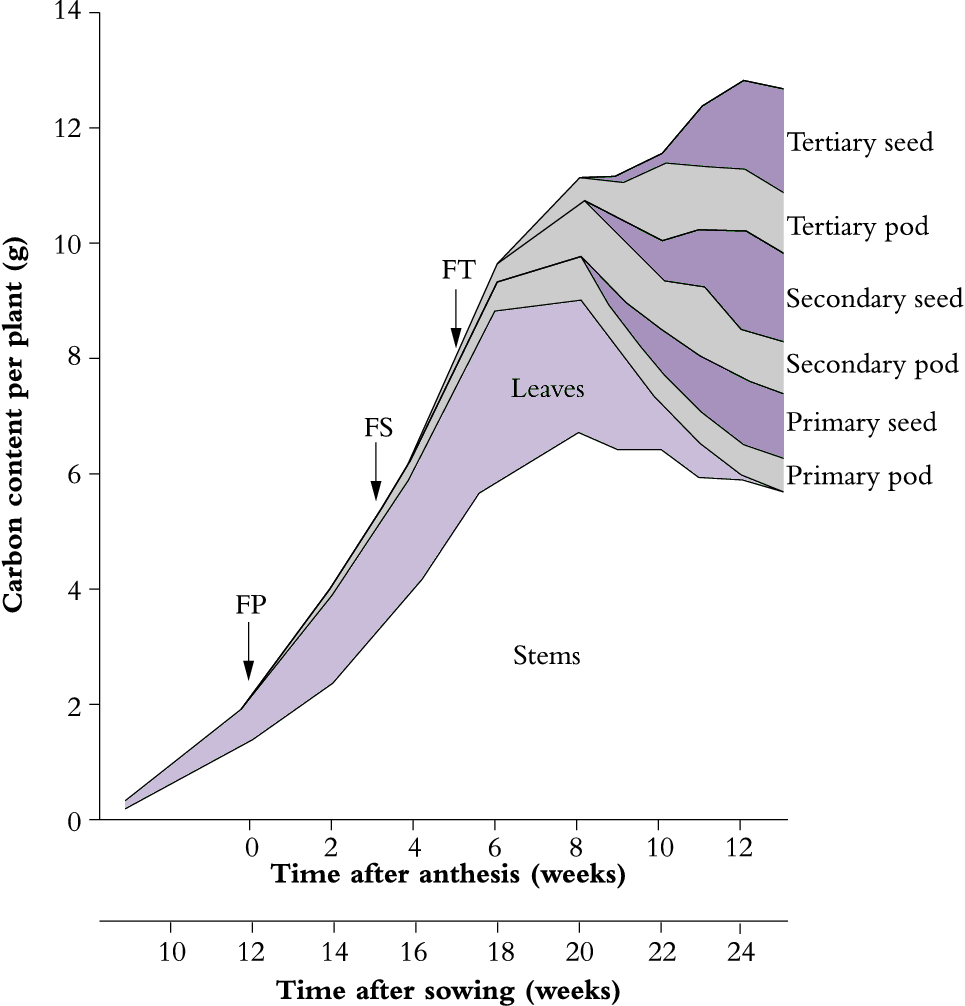 In wheat, also, assimilates are redistributed from stems to grains, more so when photosynthesis is limited (Rawson and Evans 1971). Remobilisation of stem reserves into grain is particularly important in a terminal drought. In wheat, stem reserves might contribute a high proportion to grain weight, and account for 80% of the carbon source rather than 10% as in well-watered conditions. But because grains are much smaller after drought, the absolute amount of carbon transported from the stem may be similar to that moved in good conditions. Percentages can be misleading.

In nature, a combination of ecological factors and life cycle options has led to wide variation in reproductive effort by vascular plants so that dry matter invested in reproductive structures relative to vegetative biomass will vary accordingly. For example, late successional rainforest species which combine shade adaptation with longevity are characterised by large propagules where massive seed reserves buffer young seedlings against shortfalls in carbon supply due to deep shade or dry spells. By contrast, early successional (pioneer) species on disturbed sites benefit by producing a large number of widely disseminated seeds. Their reproductive effort is best invested in number rather than size, and carries an added advantage that at least some viable seed will be produced even under stressful conditions. Weedy barleygrass is a case in point where Chapin et al. (1989) report that these species produce 4.5-fold more grains, but they are only one-sixth the size of cultivated barley. Ripening patterns also differed where grains matured synchronously in cultivated barley, but matured and dehisced progressively from tip to base in ears of barleygrass.