Despite complexities of fruit growth and development, there are some overall consistencies in patterns of cell division and enlargement, as well as tissue differentiation and fruit enlargement (Figure 11.3). During the first 1–4 weeks, flesh volume increases rapidly and embryo volume remains small. Growth at this time is mainly the result of cell division. In many commercial fruit (e.g. apple, kiwifruit, tomato and peach), cell division may cease a few weeks after anthesis, and fruit growth slows down, reflected as an inflection in the growth curve, and signalling an end to the first sigmoid phase. 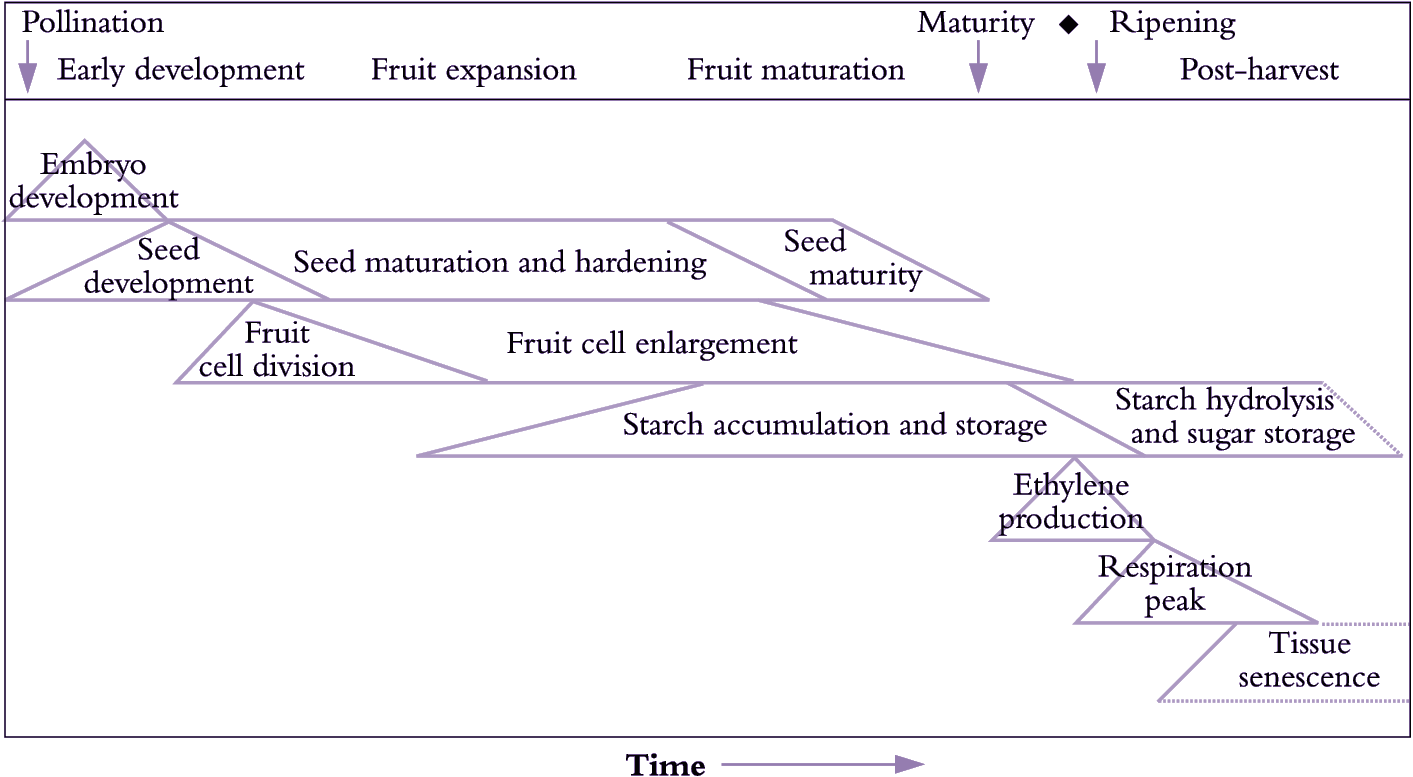 During early growth, the fertilised embryo and endosperm develop and seeds start to form (Figure 11.3). A second phase begins where the pericarp resumes growth and continues to enlarge until slowing for a second time as fruit mature. This second phase in fruit growth is mainly accomplished by cell expansion in longitudinal, radial and tangential planes. Longitudinal growth, where cells enlarge parallel to the long axis of the fruit, will often be a big factor for development of elongated fruit such as cucumber and marrow. Radial growth increases diameter as in some pumpkins. Increases in cell volume during fruit growth can be considerable. Mature watermelons end up with some of the largest parenchyma cells in the Plant Kingdom, about 0.7 mm in diameter. In contrast to this general pattern where cell division ceases after a few weeks, pericarp cells of avocado fruit continue to divide over the whole growth period so that cells in mature fruit are still relatively small.

Cell enlargement is not a uniform process. Cells in various regions of a fruit often enlarge at different rates and in different planes, so that many mature fruit show strong gradients in cell size from their surface to the centre. In apple fruit, cells closest to the core are smallest, with cell size increasing towards the fruit surface. Conversely in many berries, such as cucumber, kiwifruit and grape, the smallest cells are found in outer regions of the pericarp, with size increasing progressively towards inner regions.