All living organisms perceive and process information from the environment at the cellular level through different kinds of receptors, which transfer the signal inside the cell and activate downstream signalling cascades. For example, in humans, ‘thermoTRP’ proteins are involved in thermosensing and are activated by the cool temperatures (10-23°C) and by compounds that cause a sensation of coolness, such as menthol or eucalyptol. However, to date no cold sensor has been found in any higher plant. Furthermore, it has been shown that cold-responsive gene expression in plants increases in response to gradual decreases in temperature, as well as to sudden shifts to cold temperatures, indicating that plants can sense and respond both to the magnitude and the rate of the temperature change, making it probable that there are multiple mechanisms present to detect and mediate plant thermal responses. 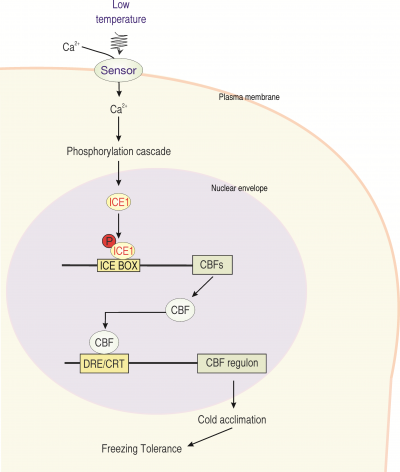 One of the more favoured candidates for sensing low temperature is a change in membrane fluidity (i.e. viscosity of the lipid bilayer of cell membranes). This reflects the fact that the structure and fluidity of lipid membranes is dependent on their composition and temperature. Low temperatures decrease the fluidity of lipid membranes as the hydrogen bonding between adjacent fatty acids is increased. The temperature at which membranes undergo a conversion from a fluid state (that exists at warm-moderate temperatures) to a gel-like state (that exists in membranes at low temperatures) is defined as the ‘transition temperature’ (Tm). Tm values as high as 15–20oC have been reported for some species, with increases in the unsaturated fatty acid content of membranes decreasing the Tm. Below the Tm, the function of membrane-bound enzymes and transport of substrates is often reduced owing to the gel-like state of the membrane.

The mechanism via which the decreases in membrane fluidity are linked to subsequent downstream responses is still unclear, but it is likely that fluidity-mediated increases in cytosolic concentrations of calcium ([Ca2+]cyt) play a role (Figure 14.22). This is because decreases in fluidity are often associated with a fast, cold-induced increase in [Ca2+]cyt, mainly as a result of Ca2+ transfer across the plasma membrane from the extracellular spaces. Ca2+ is integral to normal cell function and its signalling network is extensive.

Increases in [Ca2+]cyt are thought play a role in the cold acclimation process, with [Ca2+]cyt acting as a secondary messenger. The increase of [Ca2+]cyt results from the activation of calcium channels primarily located in plasma membranes, and it has been suggested that the Ca2+ channels may either directly respond to cold or in some way sense changes in the plasma membrane or the cytoskeleton, triggering the molecular response to the change in temperature. The Ca2+ signal is decoded in plants by calmodulins (Ca2+-binding messenger proteins) and Ca2+-dependent protein kinases (Figure 14.22). Mitogen-associated protein kinase (MAPK) cascades participate in the signalling pathways of an array of abiotic stress responses and act as downstream transducers of the cold stress-induced Ca2+ signal.  Cold Ca2+ signalling is affected by the circadian rhythm and depends partly on cell type and sub-cellular location, potentially allowing specific responses from this generic signal.

While Ca2+ is known to regulate the activity of many signalling components, including phospholipases and protein kinases, and lead to the induction of cold-induced gene expression or repression, many questions remain. For example, the identity of the Ca2+-dependent protein kinases and the genes whose expression they control are generally unknown. Finally, while this represents one of the more intensively investigated options to explain thermal sensing and signal transduction, it is important to note that Ca2+-signalling is not the only sensing mechanism, with Ca2+-signalling often exhibiting extensive cross-talk with other signalling systems, including that of reactive oxygen species (ROS). For example, an increase in [Ca2+]cyt activates mitochondrial external NAD(P)H dehydrogenases, thus lowering the reductive power of the inter-membrane space and potentially reducing ROS formation. Such a combination of signalling networks most likely allows generic stress responses to occur in response to a variety of stimuli, leading to cross tolerance. Finally, Ca2+-signalling events may take place at different locations within the cell (e.g. within the different organelles), will have different physiological causes (e.g. production of ROS in the chloroplast or mitochondria) and, as a result, will occur at different specific times following exposure to a chilling stress event.

‹ 14.5 - Plant responses to cold up 14.5.2 - Changes in gene expression underpinning cold acclimation ›
Back to top