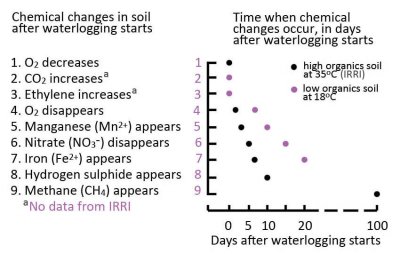 Table 18.1. List of chemical changes in two soils and a linked graph of when they occurred during 100 days of waterlogging. One soil is a sandy loam containing little organic matter at 18 °C from Muresk, Western Australia, the other a clay soil high in organic matter at 35 °C from the International Rice Research Institute (IRRI) in the Philippines. Based on Setter and Belford (1990).

In drained soils, diffusion in the gas phase of the bulk soil sustains the O2 supply needed for roots to respire at optimal rates. Soil flooding impedes O2 movement into soils, and so roots experience hypoxia (sub-optimal O2) and anoxia (absence of O2). O2 is the terminal electron acceptor of mitochondrial electron transport, so anoxia inhibits respiration and the resulting energy deficit has major implications for roots. In addition, decreases in soil redox potential result in significant changes to the soil elemental profile. The sequence of events following soil flooding are listed in Table 18.1, which also shows the rates of change measured in two soil types differing in temperature and organic matter contents. The impeded gas exchange during soil waterlogging leads to root hypoxia or anoxia, high CO2 in the root zone, and phytotoxins in reduced soils, all with consequences for root metabolism, nutrient acquisition, and growth of roots and shoots.

As soon as O2 is depleted, NO3- is used by some soil microorganisms as an alternative electron acceptor in their respiration; NO3- is reduced to NH4+, so it becomes the main form of mineral nitrogen in waterlogged soils. In the rhizosphere of roots with radial O2 loss (ROL), however, NH4+ can be converted back to NO3-, with both these forms of mineral nitrogen absorbed by roots. Manganese oxides are the next electron acceptors used by anaerobic microorganisms, followed by iron oxides resulting, respectively, in elevated concentrations of Mn2+ and Fe2+ in the soil solution; these soluble forms often increase to levels that are toxic to plants. Further decrease in the redox potential results in the reduction of SO42- to H2S, which is also potentially toxic. In addition to these inorganic phytotoxins (Fe2+, Mn2+, or H2S), various short-chain fatty acids can also accumulate in waterlogged soils. In addition to phytotoxins, some nutrients change in availability in flooded soils; e.g., P becomes more available, whereas Zn becomes less available (reviewed in Ismail et al., 2007).

High concentrations of both Mn2+ and Fe2+ are considered to be major constraints for growing sensitive cultivars of wheat in waterlogging-prone areas of Australia (Khabaz-Saberi et al. 2010); these elemental toxicities also limit rice yields in many flooded areas around the globe. Also detrimental to plants is the accumulation of metabolites (e.g. acetic acid, butyric acid, propionic acid) produced as a result of anaerobic metabolism by microorganisms in waterlogged soils. The types and amounts of these organic compounds depends upon the fermentative character of the microorganisms, the organic matter in the soil, and on soil conditions such as pH and temperature. These compounds can have adverse effects on root growth (e.g. cell division and viability) and nutrient acquisition (e.g. activity of various membrane transporters, membrane permeability) and, ultimately, shoot growth (Shabala 2011).

Of particular interest is the finding that the function of root plasma membrane transporters may be affected by these phytotoxins or secondary metabolites in waterlogged soils. Transporters located at the root-rhizosphere interface would be exposed to these toxins in waterlogged soils. Ion flux kinetics for plant roots changed rapidly upon exposure to secondary metabolites (Pang et al. 2007), and uptake of phytotoxins per se may be mediated by membrane transporters. Whether wetland plant roots, as compared with waterlogging-sensitive crops, posses membrane transporters more resistant to these toxins is an important question for future research, with possible implications for improving waterlogging tolerance in crops.

‹ Chapter 18 - Waterlogging and submergence up Case Study 18.1: Rice ecotypes and systems ›
Back to top