Xylem sap contains all the inorganic nutrients needed for plant growth, in the proportions in which they are needed. The concentrations of some nutrients are dilute when compared to phloem sap, in particular potassium and nitrogen-containing solutes (Table 3.2). The concentrations also vary at different times of day, being lowest in the middle of the day when transpiration is highest, and quite high at night when stomates are closed so there is very little flow of sap to the shoots. The osmotic pressure of xylem sap therefore ranges from less than 0.05 MPa during the day to about 0.15 MPa (60 mOsmol L–1) during the night. The flux of solutes (the concentration multiplied by the flow rate of the sap) is maintained at a steady rate over the whole 24 hours. 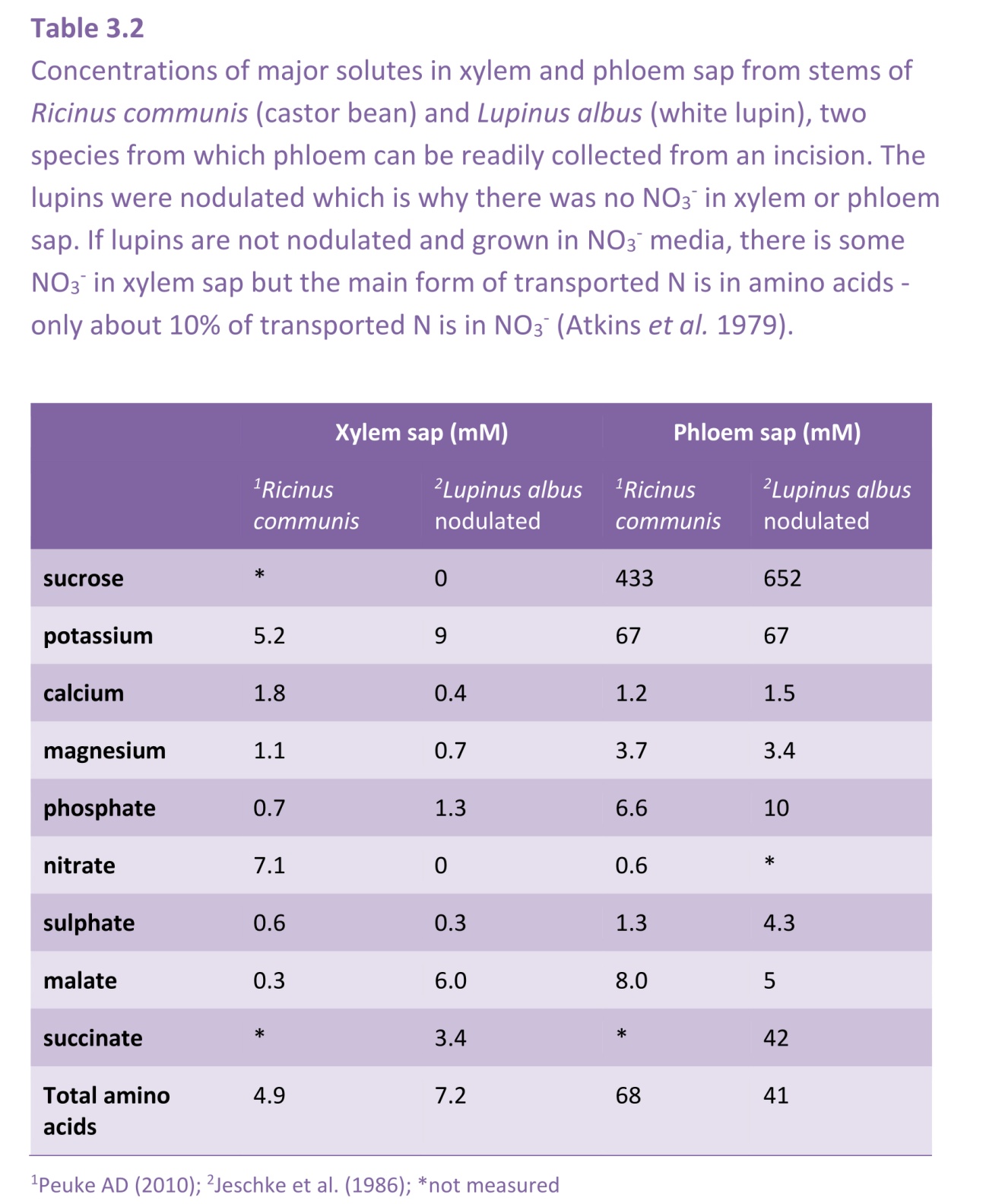 Most solutes in xylem sap are inorganic ions (e.g. nitrate, potassium, magnesium and calcium), but organic solutes are also present (Table 3.2). Organic acids and amino acids in xylem sap can be present in substantial concentrations, and sugars (but not sucrose) reaching 5 mM in some perennial species. Many trees including eucalypts are host to boring insects at particular times of the year, when sugar and nitrogen content of the sap is nutritionally valuable. Even though sugar concentrations in xylem sap are much lower than in phloem sap, the high nitrogen to sugar ratios and low osmotic pressures make it a good substrate for many herbivores. More extreme examples of the carbohydrate content of xylem sap are temperate deciduous trees such as maple, which have traditionally been tapped to yield a sugary solution in the period prior to budburst. This indicates that xylem can be a conduit for carbon remobilisation in addition to its central role as a pathway for water and nutrient transport. Xylem parenchyma cells load ions into xylem vessels in roots (Section 3.6) and also contribute to modiﬁcation of ion levels along the xylem pathway. In secondary tissues, rapid transfer of solutes into and out of the xylem is partly achieved through close association of living ray cells and xylem vessels.

Other organic molecules act to transport inorganic nutrients to the shoots. Nitrate and ammonium are assimilated into organic forms, such as amino acids, in the roots of many plants. In legumes, nodules deliver an even wider selection of nitrogenous compounds to the xylem, including ureides and amides. These often constitute the dominant form of nitrogen reaching shoots and are therefore, a major component of the sap. Other examples of complexed forms of inorganic nutrients in xylem sap are metal ions such as zinc, copper and iron, which are almost exclusively chelated to organic acids.

Phytohormones such as abscisic acid and cytokinins are present in xylem sap and serve as signals from roots to shoots affecting growth and development, and other physiological responses.