Water drains through soil due to gravity, leaving medium-sized pores still ﬁlled with water, and with thin ﬁlms around soil particles. Soil is porous and holds water in its pores by capillary forces. As a soil dries, the larger pores drain and the remaining pores hold water ever more tenaciously. Water in these pores is under suction (negative hydrostatic pressure, P) and this suction typically ranges from about 10 kPa to about 1.5 MPa in soils supplying water to plants. At suctions of less than 10 kPa, water is held in such large pores that it is likely to drain quickly away; at suctions greater than 1.5 MPa, most plants are at their limit for exerting sufﬁcient suction to extract the water.

When substantial rain falls on a freely draining soil, it may fill all the pores, even to the point of run-off. Thereafter, water quickly drains out of the largest pores under the influence of gravity into the drier soil below. This process of redistribution continues for days, even weeks, but it does so ever more slowly as the remaining largest pores continue to drain. During this time the hydraulic conductivity of the soil falls by several orders of magnitude because the resistance to viscous flow through water-filled pores depends inversely on the 4th power of their diameter.

After about 2 days of redistribution, the rate of drainage typically drops to only a few mm per day, which in the field is similar to other forms of water loss from the soil: uptake by roots, or evaporation from the soil surface. At this point there will be a suction (negative pressure) in the soil water of somewhere between 10 and 30 kPa, and the water content then is known as “field capacity” or “drained upper limit”.

Soil scientists classify soils according to particle size as:

The structure and texture of the soil determines how much water can be held in it. Sand particles are large (50 mm - 2 mm) and hold onto little water, but a sandy soil provides good aeration. Sand holds little water because the pores between the grains are large. Therefore, its field capacity, the amount of water in the soil remaining a day or two after irrigation, can be as low as 10% (weight per volume; or 10 mL water per 100 mL soil volume).

Clay particles are much smaller (less than 2 mm) and easily compacted. That makes clay a good material for building bricks, but not so good for allowing water, air, and plant roots through. Clay particles have stacked platelets which provide large amounts of surface area. Clay soils store large amounts of water and have a field capacity above 40%, though much of that may be in pores too small for plants to extract water, as shown in the table below.

Silt is the medium size particle (2-50 mm), with better water retention than sand, but less nutrients than clay. Loam is a soil comprised of roughly equal amounts of sand and silt and a little less clay.

Different types of soil are comprised of various proportions of these particle sizes, as illustrated in Figure 3.37. 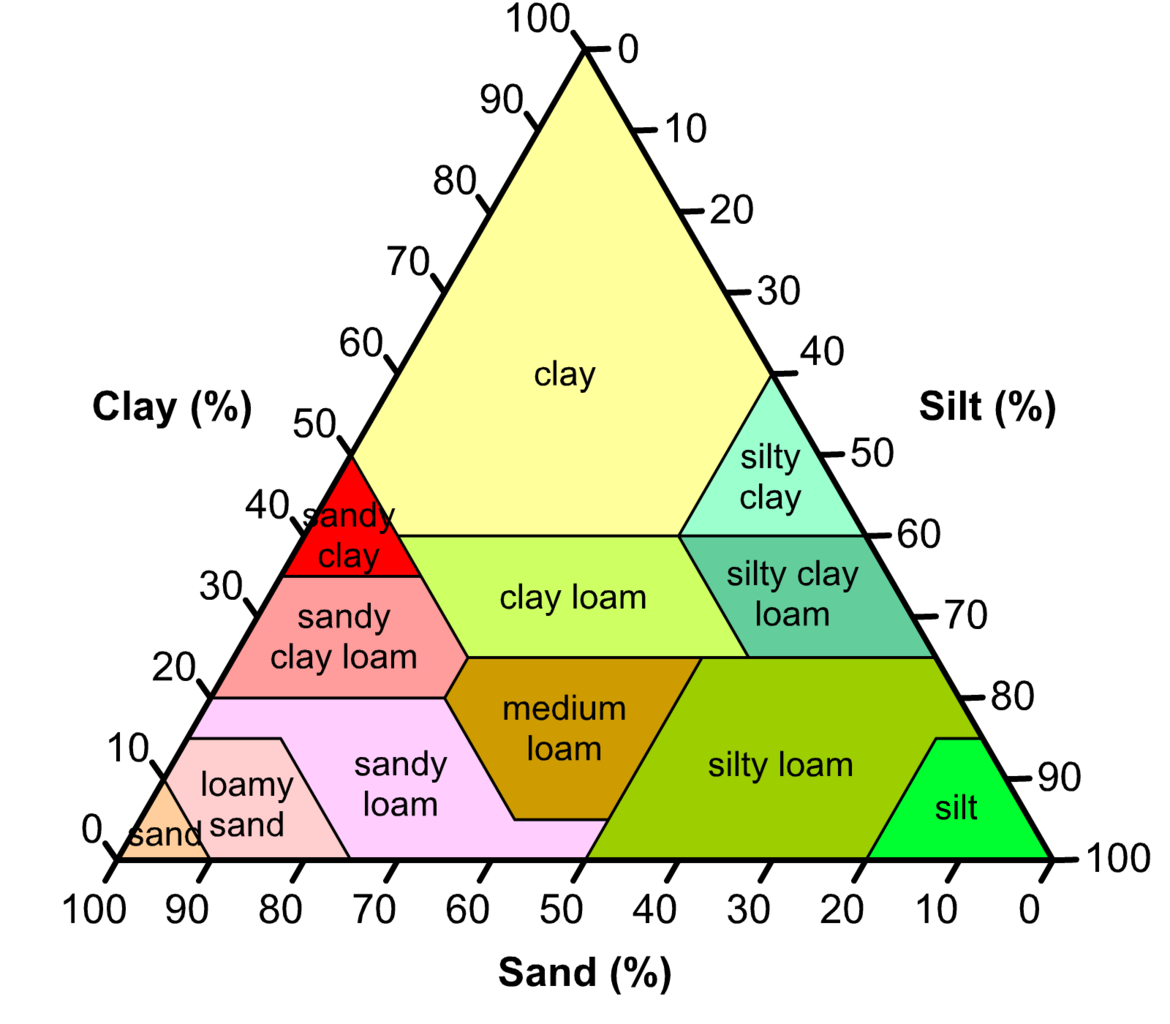 Figure 3.37 Textural classification of soils. Loam is a soil comprised of roughly equal amounts of sand and silt and a little less clay. http://imgkid.com/soil-texture-triangle.shtml

The diameter of pores in soil is roughly equal to one fifth of the diameter of the soil particles. Thus, at the boundaries between these classes, the approximate diameters of the pores would be as shown in Table 3.3 with the suction needed to drain them. 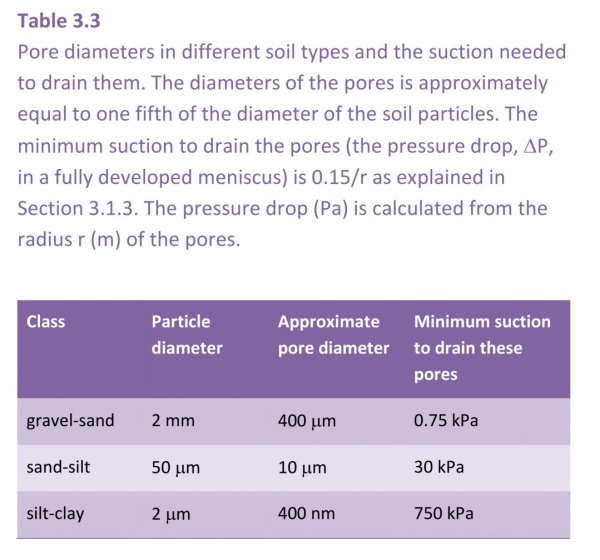 This table shows that many pores in a gravelly soil would drain at a suction of only about 1 kPa, but that a clay soil would need ten times this suction, close to 1 MPa, to drain many pores. Transpirational pull by plants can provide suctions above this, but there is a limit at which plants can maintain suction without the risk of embolism.

This term is used by crop physiologists, and often called the “lower limit of water extraction” by agronomists and crop modellers. When the water content of a soil is below the wilting point, plants have difficulty accessing it, as they cannot generate a sufficiently low water potential. In practice, this critical water potential has been found to be about -1.5 MPa, which effectively marks the lower limit of the available soil water.

Soil at wilting point is not dry. Different soil types hold very different amounts of moisture at their wilting points. As plant remove water and the soil starts to dry, the small pores make it difficult for roots to extract all the water, so clay soils hang onto their water more strongly than sandy or loamy soils, and results in the plant available water being less for clay soils than for loamy soils which have a lower clay content (Table 3.4).  Silt contains pore sizes intermediate to clay and sand, and makes up about 50% of the composition of loamy soils (Figure 3.37) and give it the favourable property of retaining more water than sand as the soil but releasing it more easily than clay. 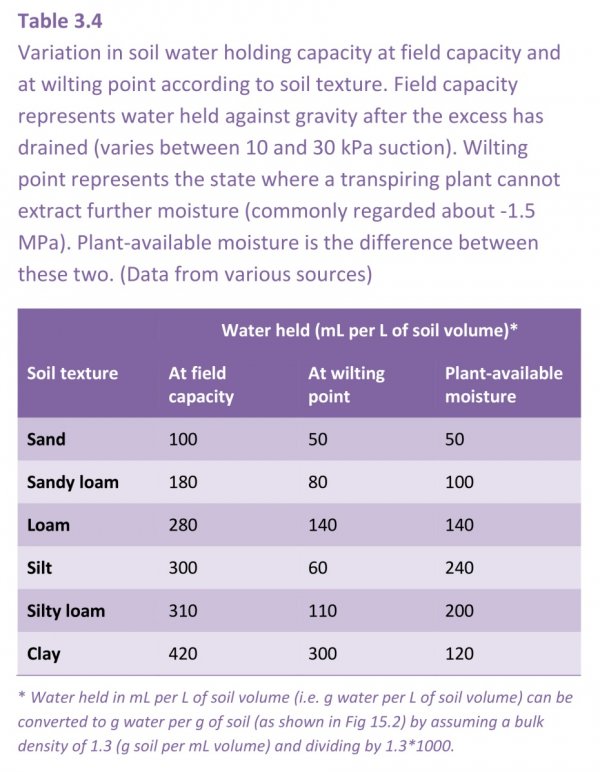 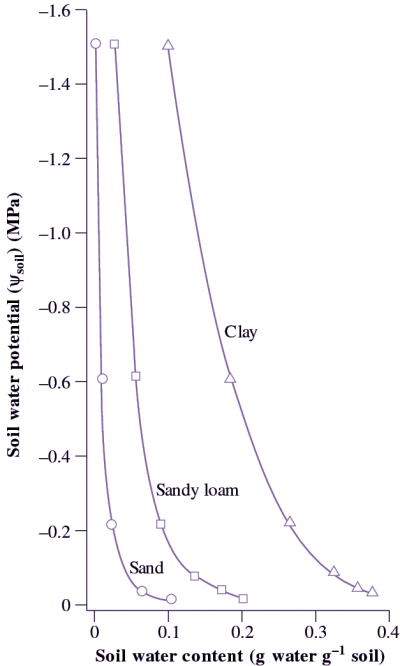 Figure 3.38 Clay soils are fine textured and have a greater water-holding capacity than do sandy soils that are composed of larger particles. Clay soils hold a greater amount of plant-available water between field capacity (Ψsoil about -0.02 MPa) and wilting point (Ψsoil about -1.5 MPa) than do sandy soils. In both situations, water is held with progressively stronger forces as the soil mass dries out. (R O. Slatyer and I.C McIlroy, 1961).

The relationship between soil water content and soil water potential (Ψsoil) is shown in Figure 3.38 for the three different soil types. Water is held with progressively stronger suctions as the soil dries, and at the permanent wilting point of -1.5 MPa clay soils retain much more water than sands or sandy loams that is not available to plants.

Another feature of clay soils that makes them less desirable for agriculture or horticulture is that root length density (length of roots per unit volume of soil) tends to be lower than in the lighter textured loamy and sandy soils. Despite their substantial moisture reserves, ﬁne-textured clay soils are generally less hospitable to plant roots than loamy or sandy soils. As a result, plant-extractable moisture in clay soils is somewhat less than the soil’s physical properties alone would imply.