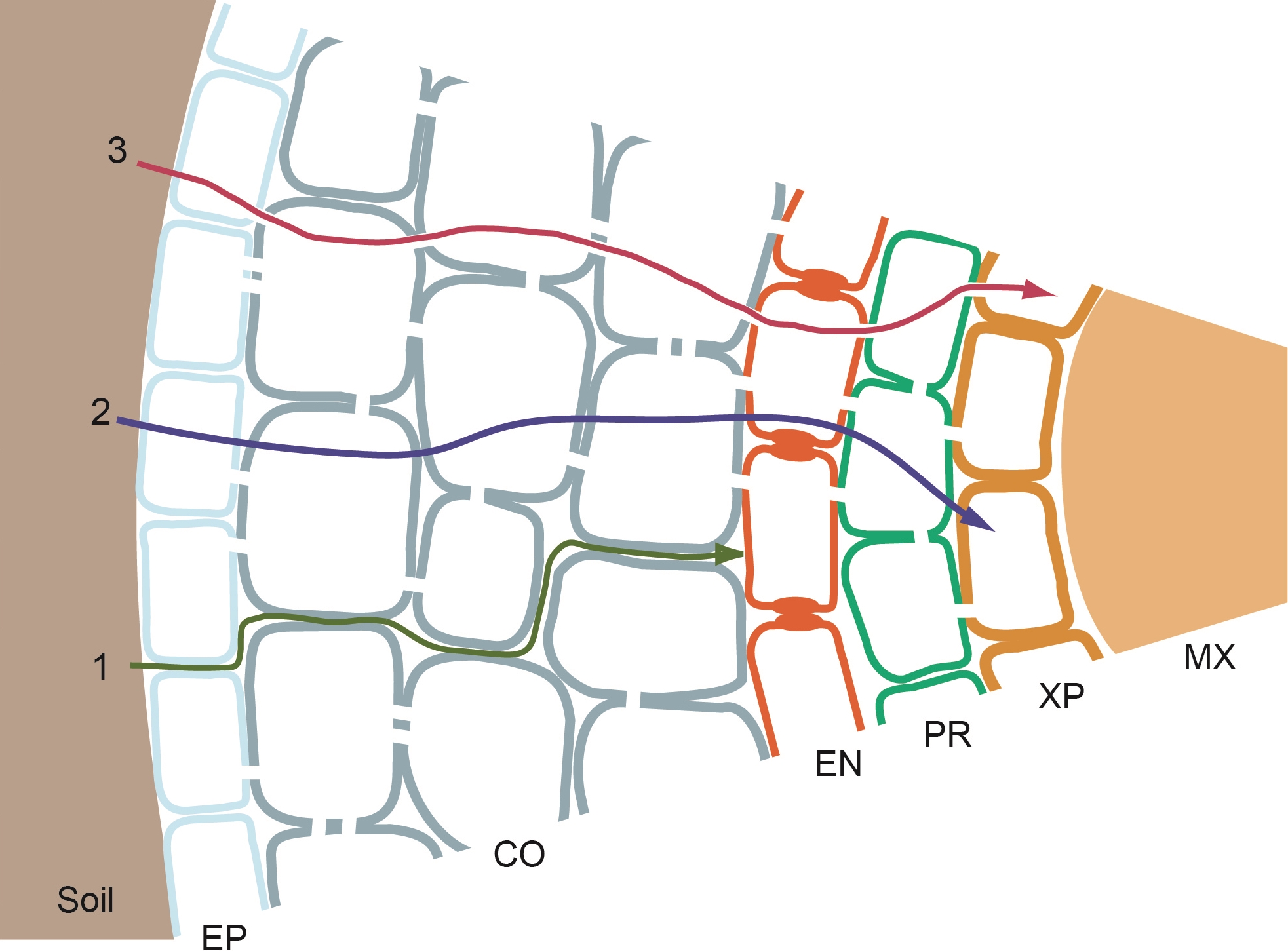 Figure 3.47. Sketch of a transverse section of a young root showing three proposed pathways of ion and water flow across roots. 1. Apoplastic, via cell walls. 2.  Transmembrane (transcellular), via cytoplasm within cells and crossing membranes via efflux and influx membrane transporters. 3. Symplastic, via cytoplasm all the way, crossing cell walls via plasmodesmata. (Drawing courtesy B. Berger, based on Plett and Moller 2010). Note that at this stage the endodermis is not suberised and has just a Casparian strip (red). Deposition of suberin in the endodermal wall, and the development of an exodermis, will restrict the apoplastic and transcellular pathways.

Water and ions may move through root tissues along one of three routes: symplastic, apoplastic, or transmembrane, the latter also known as the “transcellular pathway” (Figure 3.47). An update on the anatomical and molecular bases of these pathways in Arabidopsis is given by Barberon and Geldner (2014).

The proportion of water flowing through the different pathways undoubtedly varies with the plant’s rate of transpiration.

Water and soil solutes might move through the cell walls of the cortical cells until the endodermis, where they would cross the plasma membrane of the endodermal cells. Water would cross via aquaporins, and solutes via ion channels or transporters (see Section 3.6). This is possible in roots without a suberised hypodermis and when the endodermis is in the primary stage of development, as described in the following page. Entry of anions to deep layers of the cortex is likely to be restricted by charge repulsion from dissociated, negative carboxyl groups in cell walls (Donnan Free Space). In general, cations also pass through cell walls more readily than anions, particularly if many of the carboxyl groups in cell walls are not occupied by Ca2+ ions. Nonetheless, apoplastic flow of water through roots can sustain large ion fluxes during periods of high transpiration.

When the endodermis is suberised, water and solutes cannot enter from the apoplast and instead are taken up into the adjacent cortical cells and move via plasmodesmata into the endodermis.

Symplastic flow occurs when water or solutes are taken up by the epidermis or an outer cortical cell, and then subsequently cross the rest of the cortex via plasmodesmata. Plasmodesmata are extensions of the plasma membrane that cross cell walls and provide cytoplasmic continuity between cells, allowing neighbouring cells to communicate and exchange materials more freely. Water and ions can move through the cortex via a series of plasmodesmal connections, thereby remaining in the cytoplasm until reaching the stele. Rate of water and nutrient transport is largely regulated by plasmodesmal resistance, which depends on size and frequency of plasmodesmata in the cell membranes. Alternatively, water and some ions enter vacuoles and are therefore, subject to transport properties of the tonoplast.

A third possibility is the transmembrane or transcellular route, in which water and nutrients cross membranes, passing repeatedly between symplasm and apoplasm as they are transported from one cell to the next. For nutrients, this form of transport is facilitated by carriers that are distributed in a polar fashion, with influx carriers located on the outer walls and efflux carries on the inner walls. Water transport across cell membranes is via aquaporins for which there is no “rectification”, or intrinsic directionality of transport. They are therefore most likely to be distributed evenly along the plasma membrane.

This pathway may increase resistance to flow of water, but also provides a more effective mechanism for controlling the flow of solutes and water across the root than the purely symplastic route via plasmodesmata when only the first membrane crossing is available to control ion and water transport.

‹ 3.5 - Water and nutrient transport through roots up 3.5.2 - Variable barriers: endodermis and exodermis ›
Back to top