3.5.3 - Relation between water and nutrient flux 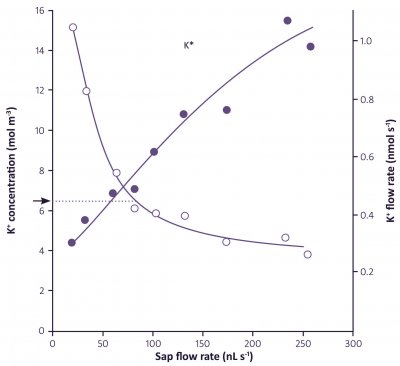 The various pathways taken by water and nutrients, and the environmental factors that influence them, are not well understood. The fundamental processes governing the relationship between water and nutrient flow through roots are complex. One thing is clear: nutrients do not move passively with the transpiration stream. But neither is their movement entirely independent of it.

This section looks at the relation between water and solute fluxes to the shoot: how the rate of transpiration affects solute concentrations in the xylem, and how active solute transport affects water flow rates at night (root pressure).

(a) Effect of transpiration on solute flux in the xylem

Solute fluxes in the xylem usually respond to changes in transpiration rate, although the relationship is not proportional. The figure below (Figure 3.55) indicates an apparently strong relation between water flux and  K+ flux, but it must be noted that the flux of  K+ is already high at very low flow rates, increases linearly with moderate increases in flow rate, but then tapers off at high flow rates.

A similar relation has been found for other nutrients like nitrate.

(b) Effect of transpiration on solute concentration in the xylem 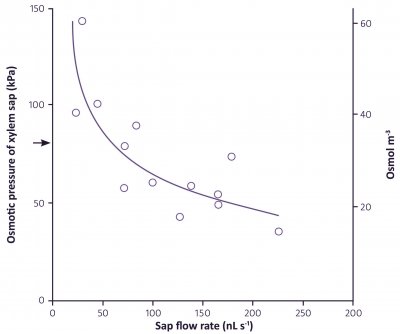 Figure 3.56. Effect of transpiration rate on osmotic pressure (left hand axis) and the corresponding solute concentration (right hand axis) of xylem sap of young barley plants. Transpiration rates were imposed by varying vapour pressure deficit around the shoots and xylem sap was sampled by applying sufficient pressure to roots to cause a cut leaf tip to bleed. Arrow indicates the external osmotic pressure. (Munns and  Passioura, 1984)

The data also shows that an apoplastic or diffusive uptake of K+ is not important because the concentration of K+ in the xylem was greater than the external K+ over a range of volume fluxes which produced an increasing flux (Figure 3.54). These data strongly suggest that ion concentrations in xylem sap are a result of either a single variable pump, or more likely of several sequential processes. The composition of the transpiration stream could be modified after the first passage across a membrane as it flows towards the stele or upwards through the stele by either active or passive ion fluxes from cortical or xylem parenchyma cells.  K+ could be pumped in (or diffuse in) at rates which increase with increasing volume flux.

Similar relationships occur between most solutes in the sap and transpiration rate, as shown in Figure 3.56.

Plants that have had shoots removed have very concentrated xylem fluid, which exudes from the cut stumps under positive hydrostatic pressure from the roots (‘root pressure’). Root pressure is also responsible for the droplets of water seen on the margins of guttating leaves early in the morning (Figure 3.57). 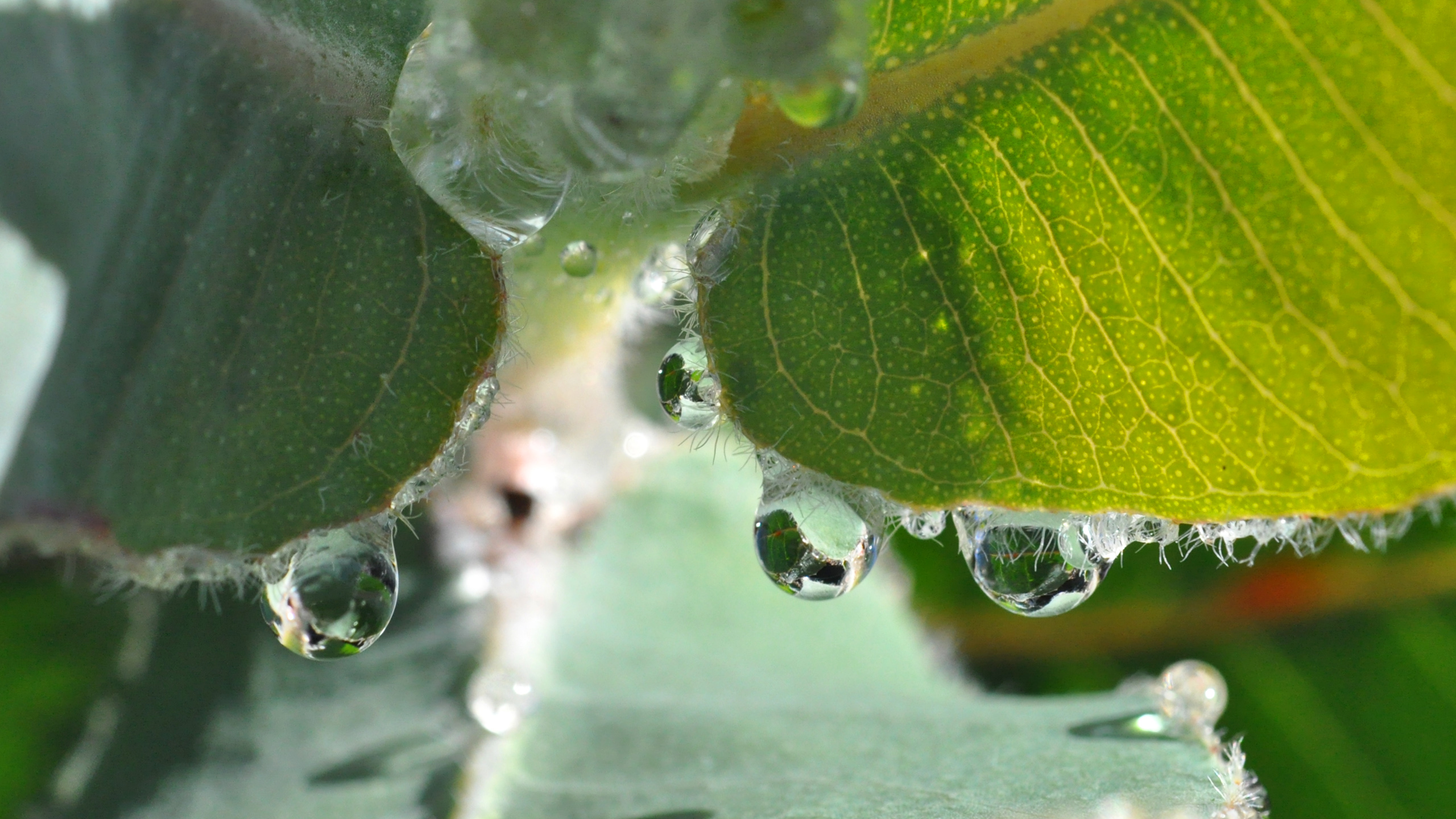 This occurs because nutrient uptake is an active process, independent of water uptake from the soil, and continues during the night – the rate of nutrient uptake varies little over 24 h. When nutrients are pumped into the stele, water flows in by osmosis, and the pressure builds up. Positive pressures of 30-300 kPa can be achieved in this way.

The Casparian strip and the suberisation of the endodermis is important as it provides a barrier to prevent back-flow of water and also structural support so that the root can contain a positive pressure at night. The pathways of nutrient and water flow across the root cortex may change at night, for instance the apoplastic pathway may be of lesser importance at low rates of transpiration. At zero transpiration induced by a root pressure probe and when the shoot is removed, pathways may be different again.

Root pressure is not just a phenomenon, it is an essential process responsible for moving nutrients to the shoot during the night when transpiration is low. It may also have a function in dissolving gas bubbles that might have caused cavitation in the xylem during the day.

‹ 3.5.2 - Variable barriers: endodermis and exodermis up 3.6 - Membrane transport of water and ions ›
Back to top