In most plant species, phloem is made up of phloem fibres, phloem parenchyma, sieve cells (sieve elements) and their accompanying companion cells (Figure 5.5a). Sieve elements are ideally suited for rapid transport of substances at high rates over long distances. They are elongated and are arranged end to end in files referred to as sieve tubes (Figure 5.16b). Abutting sieve elements are interconnected through membrane-lined pores (sieve pores) with large diameters (1 to 15µm). These pores collectively form sieve plates (Figure 5.16c). The transport capacity of sieve tubes is dependent on a developmentally programmed degeneration of the sieve element protoplasm (cell contents) leaving an open, membrane-bound tube. In mature conducting sieve elements, the protoplast is limited to a functional plasma membrane enclosing a sparse cytoplasm containing low densities of plastids, mitochondria and smooth endo-plasmic reticulum distributed along the lateral walls (Figure 5.16d). These relatively empty sieve tubes provide a longitudinal network which conducts phloem sap (Figure 5.5b). 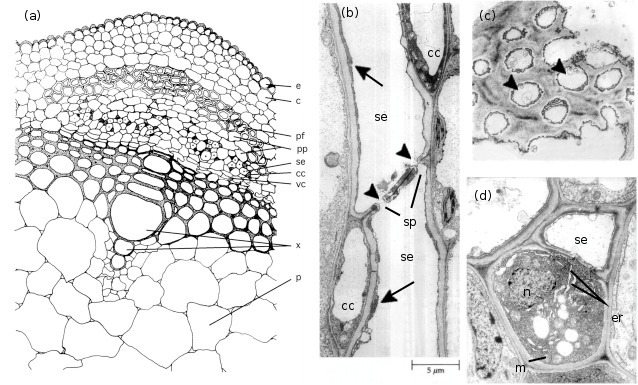 Figure 5.6 (a) Electron micrograph and (b) diagrammatic interpretation of a secondary plasmodesma interconnecting a mature sieve element and its companion cell in a tobacco leaf. Note the characteristic branching of the plasmodesma within the wall of a companion cell. Scale bar = 0.2 μm. c, callose; other symbols as for Figure 5.16 (Based on Ding et al. 1993; reproduced with permission of Blackwell Science)

(b) Visualising the translocation stream 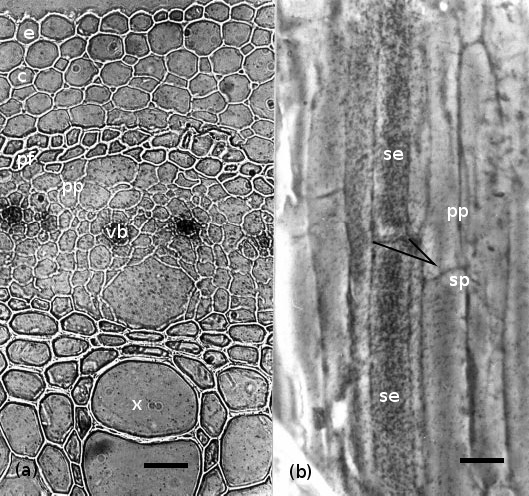 Figure 5.7 Microautoradiographs of (a) transverse and (b) longitudinal sections of Phaseolus vulgaris stem tissue illustrating localisation of 14C-labelled photosynthate in sieve tubes. These sections are obtained by snap freezing plant tissue and removing frozen water by sublimation (e.g. freeze-drying or freeze substitution). 14C-labelled compounds do not move during preparation. Tissues are embedded in absolute dryness and thin sections are cut, mounted dry on microscope slides and overlain with a thin film of photographic emulsion. Silver grains are visible in the emulsion where 14C, an ideal radioisotope for these experiments, irradiates the film. Abbreviations: se, sieve element; pp, phloem parenchyma; vb, vascular bundle; other symbols as for Figure 5.6. Scale bar in (a) = 20μm; in (b) = 10 μm

Transport of radioactively labelled substances through phloem has been demonstated using microautoradiography (Figure 5.7), providing irrefutable evidence that sieve elements are conduits for transport of phloem sap. Experimentally, a pulse of 14CO2 is fixed photosynthetically and 14C-labelled sugars are given time to reach the stem, which is then excised and processed for microautoradiography. As 14C first moves through the stem, most of the isotope is confined to the transport pathway and very little has had time to move laterally into storage pools. High densities of 14C-labelled sugars are found in sieve elements (Figure 5.7), demonstrating that these cells constitute a transport pathway.

Herbivory or environmental factors causing physical damage could pose a threat to transport through sieve tubes and has undoubtedly imposed strong selection pressure for the evolution of an efficient and rapid sealing mechanism for damaged sieve tubes. Since sieve tube contents are under a high turgor pressure (P), severing would cause phloem contents to surge from the cut site, incurring excessive assimilate loss in the absence of a sealing mechanism. For dicotyledonous species, an abundant phloem-specific protein (P-protein) provides an almost instantaneous seal. P-protein is swept into sieve pores where it becomes entrapped, thus sealing off the damaged sieve tubes. Production of callose (β-1,3 glucan) in response to wounding or high-temperature stress is another strategy to seal off damaged sieve tubes. Callose also seals off sieve pores during overwintering in deciduous plants. Callose is deposited between the plasma membrane and cell wall, eventually blocking sieve pores. Whether deposited in response to damage or overwintering, callose can be degraded by β-1,3 glucanase, allowing sieve tubes to regain transport capacity.