(a) Chemical analysis of phloem exudate

Chemical analyses of phloem exudate collected from a wide range of plant species have led to a number of generalisations (e.g. Milburn and Baker 1989) about the contents of sieve tubes. Phloem exudate is a concentrated solution (10–12% dry matter), generating an osmotic pressure (Π) of 1.2 to 1.8MPa. pH is characteristically alkaline (pH 8.0 to 8.5). The principal organic solutes are non-reducing sugars (sucrose), amides (glutamine and asparagine), amino acids (glutamate and aspartate) and organic acids (malate). Of these solutes, non-reducing sugars generally occur in the highest concentrations (300–900 mM). Nitrogen is transported through the phloem as amides and amino acids; nitrate is absent and ammonium only occurs in trace amounts. Calcium, sulphur and iron are scarce in phloem exudate while other inorganic nutrients are present, particularly potassium which is commonly in the range of 60–120 mM. Physiological concentrations of auxins, gibberellins, cytokinins and abscisic acid have been detected in phloem exudate along with nucleotide phosphates. The principal macromolecule group is protein but low levels of peptides and nucleic acids are also present.  While in cucurbits the protein in exudate is comprised largely of P-protein, a diverse array of proteins, many of them enzymes, have also been detected.

(b) Signiﬁcance of the chemical forms translocated

Phloem sap provides most inorganic and all organic substrates necessary to support plant growth. Non-transpiring tissues are particularly dependent on resources delivered in the phloem (Section 5.1). That translocated sugars represent the major chemical fraction of the phloem sap is consistent with the bulk of plant dry matter (90%) being composed of carbon, hydrogen and oxygen. Carbon transport is further augmented by transport of nitrogen in organic forms.

Carbohydrate is translocated as non-reducing sugars in which the metabolically reactive aldehyde or ketone group is reduced to an alcohol (mannitol, sorbitol) or combined with a similar group from another sugar to form an oligosaccharide. Apart from sucrose, transported oligosaccharides belong to the raffinose series. In this series, sucrose is bound with increasing numbers of galactose residues to form raffinose, stachyose and verbascose respectively. However, sucrose is the most common sugar species transported. In a small number of plant families, other sugar species predominate. For example, the sugar alcohol sorbitol is the principal transport sugar in the Rosaceae (e.g. apple) and stachyose predominates in the Cucurbitaceae (e.g. pumpkin and squash). Exclusive transport of non-reducing sugars probably reflects packaging of carbohydrate in a chemical form which protects it from being metabolised. Metabolism of these transported sugars requires their conversion to an aldehyde or ketone by enzymes which are thought to be absent from sieve-tube contents.

Plant physiologists have long regarded the two long distance translocation streams of xylem and phloem as having functions additional to the distribution of nutrients and assimilates. Specifically, each serves as a means of communication between the source and sink organs such that systemic signals are thought to transmit molecular responses to endogenous and environmental cues. Furthermore, evidence is accumulating that some of these signals regulate gene expression as a consequence of their translocation (see below).

Proteomic and transcriptomic analyses have demonstrated a widely diverse composition of proteins, peptides and nucleic acids, including mRNA and small RNAs, in phloem exudates. While the origin of each individual protein or nucleic acid remains to be verified the limited compositional data available from stylectomy confirms that indeed each group of macromolecules is present in phloem. In cucurbit phloem exudate some 1110 different proteins have been detected along with a large number of mRNAs and similar data have been obtained for exudates from other species (Brassica napus, Ricinus communis and Lupinus albus). Compositional data for phloem proteins of these species show a common complement that includes phloem-specific P proteins together with proteins involved in sugar metabolism and transport, protein turnover and transport, detoxification of reactive oxygen species, as well as proteins that provide defence against insect herbivores and pathogens (Figure 10).  Some undoubtedly play a role in maintenance of the SE system while others, such as the Flowering Locus T (FT) protein associated with the flowering response (‘florigen’), appear to be systemic ‘signals’ (Rodriguez-Medina et al 2011) and there may be many more. Because sieve tubes are enucleate and lack ribosomes (5.2.2 a), proteins in the translocation stream are not formed in situ but are transported from sites of synthesis in the companion cells. 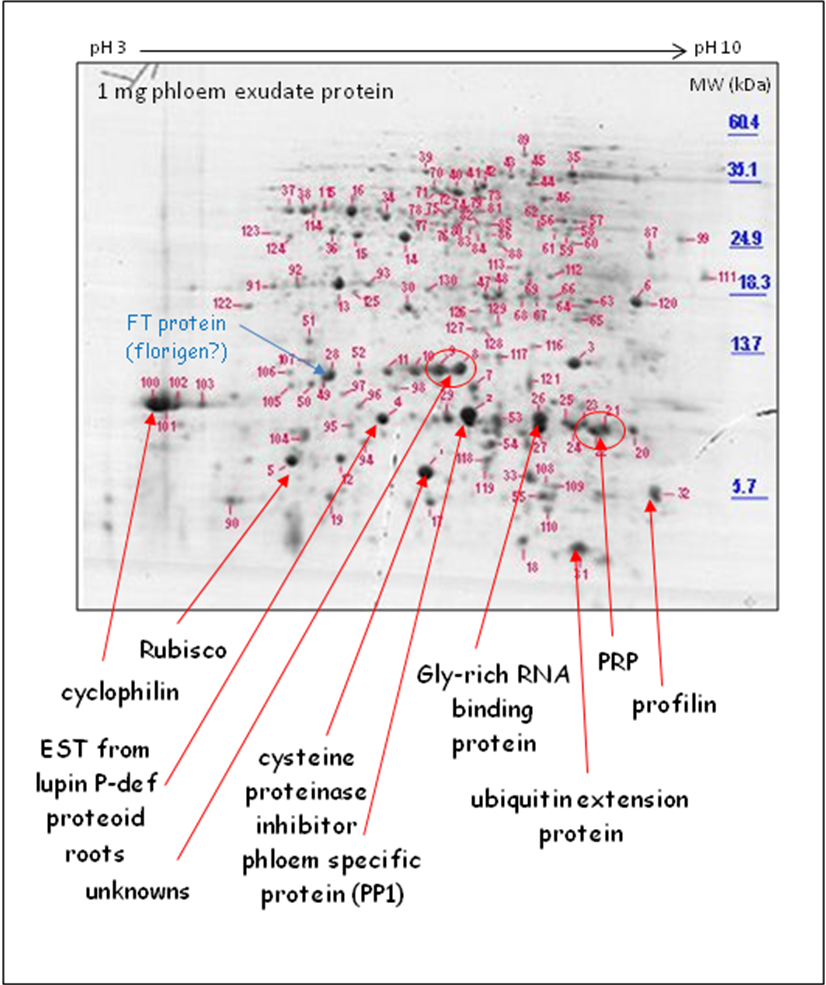 Figure 5.10. Two dimensional polyacrylamide gel electrophoresis separation of proteins in phloem exudate from Lupinus albus.  The gel was developed in the first dimension by isoelectric focusing with a linear pH gradient of 3-10 followed by separation due to differences in molecular mass.  The positions of mass standards are shown on the right hand side of the gel.  After staining with Coomassie Blue to locate the spots they were excised for digestion with trypsin. The peptides were then analysed by partial sequence determination using MS/MS and identified using database searches. (Courtesy of Craig Atkins)

Functional analysis of the cDNA identified in transcriptome studies of phloem exudates revealed transcripts involved in a wide range of processes that include metabolism, plant responses to stresses, transport, DNA/RNA binding and protein turnover.  The presence of transcripts in phloem exudate supports the idea of an RNA-based signalling network that is thought to function in control of processes associated with plant growth and development (Lough and Lucas, 2006).  However, the functional role of transcripts in the contents of sieve tubes as well as their actual translocation is yet to be determined.

Small RNA molecules (18-25 nt) have been identified in phloem exudate collected from rape, white lupin, pumpkin, castor bean and Yucca filamentosa as well as in aphid stylet exudate collected from apple stems. The population includes both microRNAs (miRNA) and small interfering RNAs (siRNA) a large number of which target mRNA of transcription factors that themselves regulate genes expressions. miRNAs are also involved in mediating environmental responses, including responses to salinity, drought, nutrient limitations, as well as hormone interactions. Their small size and powerful functions in targeting mRNAs to regulate expression suggest that those in phloem exudate are likely to be systemic signals.

An important question that relates to the significance of macromolecules in the contents of sieve tubes is proof that they are translocated and that translocation is essential for their function at a sink. A diversity of studies that have exploited cucurbit root stocks and grafted scions has provided clear evidence that P proteins among others are graft transmissible. In a series of elegant experiments Aoki et al. (2005) labelled and injected two isolated pumpkin phloem proteins (CmPP16‑1 and CmPP16-2) into the vasculature of intact rice plants through severed leaf hopper stylets and showed their translocation as well as some evidence for specificity in protein translocation.  The Flowering Locus T (FT) protein formed in leaves mediates the flowering transition of shoot apical meristems and the evidence that it is translocated is compelling. The long distance movement of RNA molecules was first demonstrated for plant viruses and there is now good evidence for phloem translocation of a number of transcripts (Lough and Lucas 2006). A recent compilation identified 13 miRNAs involved in plant responses to drought/salt stress (Covarrubias and Reyes 2010).  Eight of these were identified in lupin phloem exudate (Rodriguez-Medina et al. 2011) and, importantly, six were also recovered from PCR amplification of apple stylet exudate (Varkonyi-Gasic et al 2010).  There is thus a possibility that the responses to drought and salinity are mediated through miRNAs translocated from sites where the stress is sensed to sites where a response is initiated.

The most convincing case for a translocated miRNA in phloem regulating gene expression relates to Pi homeostasis. While both local and systemic signals are involved, miR399 is phloem mobile and acts directly in roots to down regulate the expression of PHO2 (a ubiquitin conjugating enzyme) that results in greater expression of Pi transporters to increase Pi uptake under conditions of deficiency. Systemic signaling has also been implicated in homeostasis of other nutrients, including N, S and Cu with, in each case, miRNAs involved.