Plants vary in their intrinsic growth rate, and may under the same environment differ three-fold in the relative growth rate. Some species are inherently fast-growing, and some inherently slow-growing. This section investigates the reason for this, and in particular the energy efficiency of the various species.

Fast-growing species tend to have higher rates of photosynthesis, but also use respiratory energy more efficiently for maintenance, growth and ion uptake. Variations in efficiency of energy use reflect differences in the proportion of whole-plant respiration that is allocated to these three processes and/or the specific costs of each process. 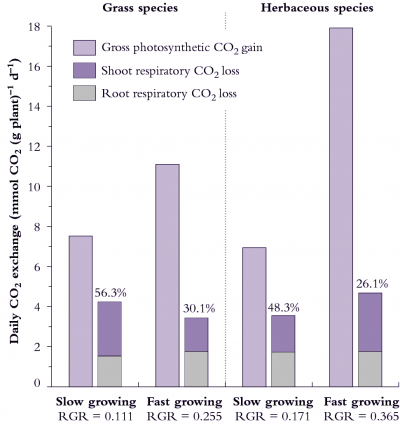 Data shown in Figure 6.18 can be used to calculate RGR for each species from photosynthesis and respiration measurements if the plant’s carbon concentration is known.

Processes supporting a net gain in new biomass (dW, g) per unit time (dt, d) can be represented as:

where  A is daily carbon assimilation and R is whole-plant respiratory loss, so that net gain per unit existing plant biomass per unit time (or RGR, g g–1 d–1) becomes

If A and R are expressed as mmol carbon g–1 dry matter per day, then Equation 6.26 becomes

where Cwp  is plant carbon concentration in mmol carbon g–1 dry matter. R can be separated into Rshoot and Rroot.

A and R can be determined from direct measurement of whole-plant gas exchange. The example below uses a value for Cwp of 34.8 mmol C g–1 dry matter.

This prediction of 0.22 d–1 for RGR represents an instantaneous value derived from whole-plant gas exchange measurements, whereas 0.255 d–1 in Figure 6.18 represents an average RGR from growth analysis over several days. Gas exchange values are generally within 10% of RGR values from sequential harvests.

Herbs and grasses can differ in the degree to which respiratory losses account for differences in RGR. Considering grasses (Figure 6.18, left side), 56% of daily fixed CO2 is lost by respiration in the slow-growing alpine species whereas only 30% of daily fixed CO2 is respired by the fast-growing lowland grass species. Over half of the carbon loss is attributable to roots in both species and, overall, respiration rate per unit plant mass is slightly higher in the slow-growing grass species.

A lower percentage loss of daily fixed carbon due to respiration in fast-growing grasses and fast-growing herbs does imply that carbon metabolism is more effective in these species than in their slow-growing counterparts, and serves as a model for generalisations. Such fast-growing plants may be more efficient in how they generate and/or use respiratory energy.

‹ 6.5.1 - Processes of energy generation and utilisation up 6.5.3 - Maintenance versus growth respiration ›
Back to top