Sources of photoassimilate can be identified by providing individual leaves with 14CO2 and following the pattern of labelled material into neighbouring organs (Figure 11.7). Leaves typically begin to show a net export of photoassimilate at about 50–60% of full size. In kiwifruit, leaves 49% expanded failed to export the radiolabelled products of 14CO2 photosynthesis, whereas those 64% expanded transported labelled photoassimilate into younger leaves. 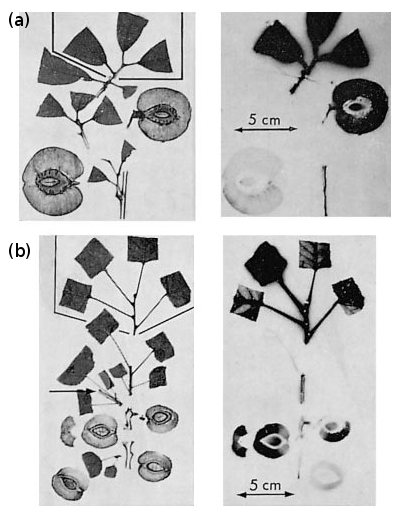 Figure 11.7 Photoassimilate moves from mature leaves of peach (a) and apricot (b) into the pericarp of maturing fruit nearby. 14CO2 was administered for about 1 h to source leaves (boxed area top left side in (a) and (b)), and movement of 14C-labelled photoassimilates over the subsequent 24 h was traced by autoradiography of harvested material (right side a and b). Intense labelling of source leaves indicates a high level of residual activity, but strong incorporation of 14C-labelled photoassimilates into the pericarp of adjacent fruit is also evident. Endocarp tissues had hardened and failed to import current photoassimilate, although seeds developing inside the endocarp did become labelled. (Based on Kriedemann (1968) Aust. J. Agric. Res. 19, 775-780)

Distribution patterns of 14C-labelled products relate to developmental morphology of fruiting shoots. Typically, source leaves are nearby on the same lateral branch, both above and below the fruit. In apple, fruiting spurs may develop primary leaves (emerging soon after budburst), then spur leaves (in a rosette at the base of the flower), then bourse leaves (growing on spur bourse shoots). Each in turn provides assimilate for the next phase of leaf growth (primary → spur → bourse); then as leaf expansion ceases, all provide assimilate to the developing fruit. Leaves on adjacent extension shoots can provide some photoassimilate to fruit, but if indeterminate growth continues the furthermost leaves become progressively less important as suppliers, and more significant as competitors. If the normal suppliers are removed, carbohydrate can come from longer distances, sometimes from leaves more than a metre away.

This importance of phyllotaxis in carbohydrate allocation to the fruit is well shown in kiwifruit, where specific leaf–fruit connections exist. Patterns of assimilate distribution from leaf to fruit have been studied by taking a number of matched lateral fruiting branches of kiwifruit vines, then supplying 14CO2 to one leaf on each, at various nodal positions along the stem, from node 1 (base) to node 10 (tip). Each lateral also had one fruit each on nodes 1 and 2, while the remaining nodes had leaves only. Distribution of 14C-labelled photosynthate was allowed to proceed for 6 d, and the total radioactivity in each leaf and fruit on the lateral was then measured. Specifically, node 1 fruit received assimilate from their own subtending leaf (node 1 leaf) and from leaves on nodes 6 and 9. Node 2 fruit was supplied by its subtending leaf and leaves on nodes 7 and 10. Assimilate from remaining leaves was distributed generally within the main body of the plant. However, if the apex of the lateral was removed to stop extension growth, fruit then drew assimilate from all leaves. By implication, a drastic change in source–sink relationships can override restriction on carbon transport imposed by vascular patterns in intact plants.