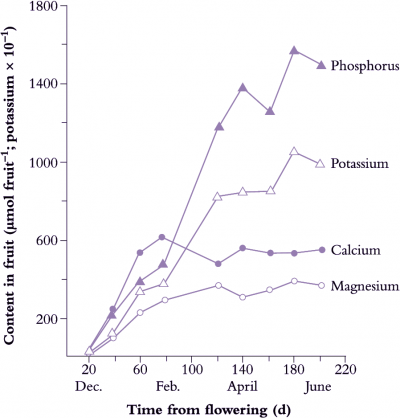 Figure 11.8. In kiwifruit, as in most fruit, accumulation of calcium is confined to early stages of development that coincide with cell division. By contrast, phosphorus and potassium move into fruit over the whole growing season and are able to enter via either the xylem or phloem. Magnesium import is meagre but progressive. Note the expanded scale for potassium. Fruit content of nutrient ions at maturity would be as follows: phosphorus 1600, calcium 600, magnesium 400 and potassium 10 000 μmol per fruit. (Based on Ferguson (1980) N. Z. J. Agric. Res. 23, 349-353)

Just as fruit require an inward flow of carbohydrate and water to provide for seed growth and pericarp expansion, so mineral nutrients are also supplied. As a rule, concentrations of the major mineral nutrients in fruit are lower than in other organs such as leaves, and the patterns of phosphorus, potassium, calcium, magnesium and nitrogen accumulation usually differ.

Mineral nutrients move into the fruit most rapidly during the early stages of development (Figure 11.8) at a time when xylem water flow dominates. As fruit approach maturity, surface to volume ratio declines, the skin becomes less permeable to water loss, and large amounts of photoassimilate are imported via phloem connections. As a result, a significant part of the water reaching fruit now enters through the phloem and is accompanied by photoassimilate. Mobile ions such as K+ and HPO42– are loaded into the leaf veins along with the photoassimilate, travel in the phloem and so reach fruit over the whole growing season. In contrast, less mobile nutrients such as Ca2+ fail to reach fruit during later stages, so that Ca2+ concentration remains steady or even declines slightly (Figure 11.8).

Nutrient deficiencies in fruit are relatively uncommon, except for those associated with calcium. Calcium deficiencies are expressed in the form of blossom-end rot in tomato, and bitter pit plus lenticel blotch in apple fruit. These apple disorders tend to be expressed during postharvest storage, but symptom expression is somehow related to the previous ripening environment. These disorders show up as a pitting of flesh and skin, reducing fruit value or even rendering those commodities unmarketable. Such commercial penalties have resulted in development of preharvest sprays and postharvest dips of calcium salts that diminish bitter-pit incidence in harvested fruit. Where there is little or no calcium recycling via phloem, calcium needs to be applied directly to fruit to have a beneficial effect.