11.5.1 - Ethylene and the regulation of ripening 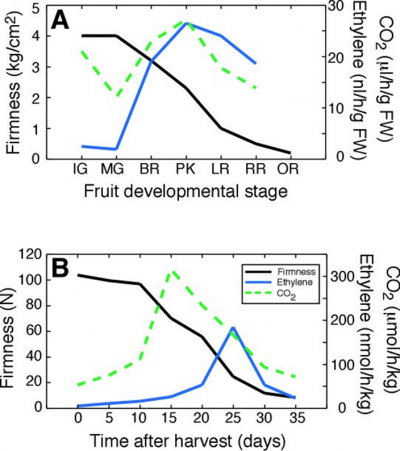 Figure 11.12. Ethylene evolution and respiration (measured as CO2 production) undergo a rapid increase then decline as fruit ripen and soften. In tomato (A), the peak of ethylene production and respiration occur relatively early in ripening, shortly after the first visible sign of red coloration on the outside of the fruit (known as the breaker stage). Abbreviations of ripening stages: IG, immature green; MG, mature green; BR, breaker; PK, pink; LR, light red; RR, red ripe; OR, over ripe. In kiwifruit (B) that were harvested and stored at 20°C, the peak of ethylene evolution occurs very late, when substantial softening has already occurred and the fruit are almost at the eating ripe stage. The earlier peak in respiration may have been caused by harvest. The two studies use different units so absolute values cannot be compared between the species. (Data taken from Maclachlan and Brady (1994) Plant Physiol. 105, 965-974; Rothan and Nicolas (1989) HortScience 24, 340-342; Taglienti et al. (2009) Food Chem. 114, 1583-1589)

Ethylene production is closely associated with fruit ripening in many species, and is the plant hormone that regulates and coordinates the different aspects of the ripening process; colour development, aroma production and texture are all under the control of ethylene (Klee and Giovannoni 2011). Typically, fruit will generate barely detectable amounts of ethylene until ripening when there is a burst of production (Figure 11.12). Historically fruit have been categorised into two classes of behaviour with respect to ethylene physiology and respiratory pattern (Table 11.2). In the first type, as fruit progress towards edibility the respiratory rate increases followed by a decline as fruit senesce. This is known as the climacteric rise. Pear, banana and avocado (Figure 11.13) show an especially strong respiratory rise. Ethylene production also increases sharply to a maximum at this time, and then declines before fruit rots intervene and lead to a renewed output. The major rise in ethylene production may take place before, just after or close to the respiratory peak. Such fruit are classed as ‘climacteric’, with apple, avocado, banana, fig, mango, papaya, passionfruit, pear and tomato being classic examples. As with the respiratory rise, the levels of ethylene produced vary widely between species. Climacteric fruit ripen after harvest, and need not remain on the tree or vine. A second category of fruit, exemplified by blueberry, cherry, citrus, cucumber, grape, pineapple and strawberry (Table 11.2) do not show such sharp changes. Respiration rate either remains almost unchanged or shows a steady decline until senescence intervenes, with little or no increase in ethylene production; these are called ‘non-climacteric’ fruit, and fruit ripen only if they remain attached to the parent plant. 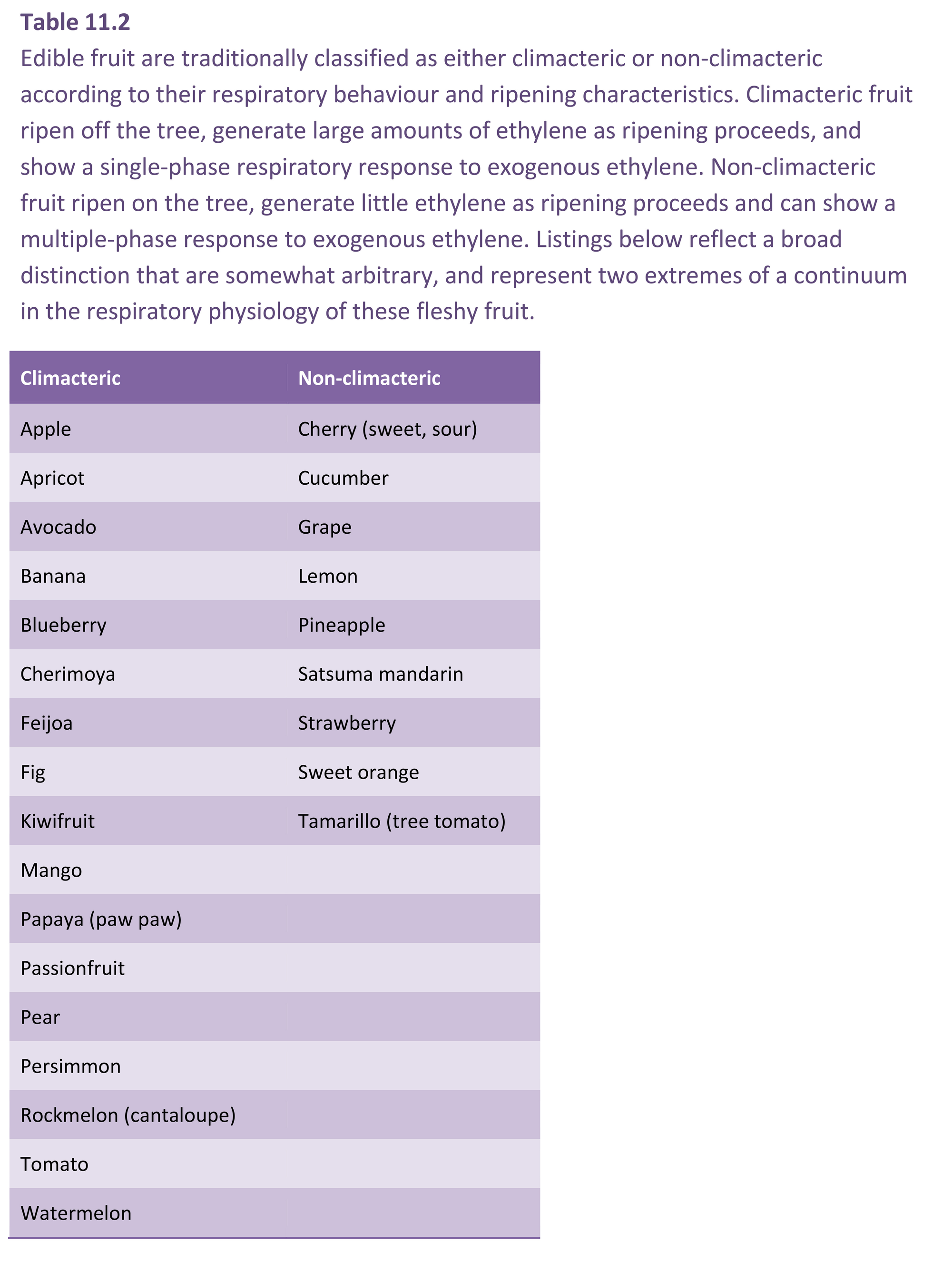 With other fruit, such as kiwifruit, a hybrid ripening pattern is seen, with most of the ripening changes occurring in the absence of any detectable rise in ethylene and CO2 production; a climacteric response occurs only towards the end of ripening. Exposure to exogenous ethylene promotes ripening of kiwifruit, but if exposure to ethylene is insufficient, or fruit are too immature, then removal of ethylene results in non-climacteric behaviour. Ethylene as a ripening trigger is used commercially with banana, avocado and early-season kiwifruit to ensure that fruit are at optimum ripeness when eaten. Conversely, if kiwifruit are to be stored for a long time, then ambient ethylene must be removed (usually by scrubbing this gas from coolstore environments). 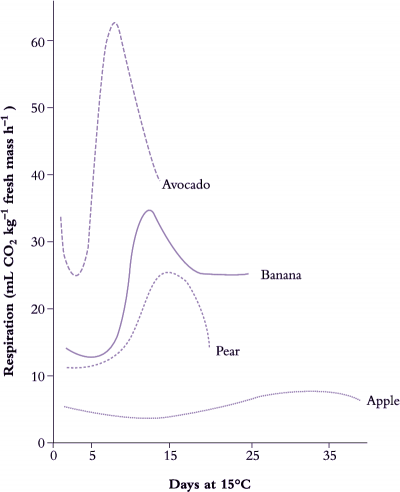 Figure 11.13. Respiratory output of CO2 can undergo dramatic change as fruits ripen. Early research on apple and pear led to a classic model of a postharvest climacteric rise associated with ripening and linked in time with ethylene production. Studies with tropical fruits such as avocado and banana then revealed characteristic 'waveforms' of even wider amplitude. (Based on Biale (1950) Annu. Rev. Plant Physiol. 1, 183-206)

Figure 11.14. The pathway of ethylene biosynthesis in plants. The two genes controlling the committed steps to ethylene biosynthesis, ACC synthase (ACS) and ACC oxidase (ACO) are highly transcriptionally regulated. In one series of experiments, the biochemical precursor of ethylene, ACC, was depleted by expression of a bacterial ACC deaminase transgene, but this reaction does not normally occur in plants.

In fruit with a climacteric behaviour, ethylene biosynthesis occurs at very low and basal levels during fruit development prior to ripening. This ethylene production is auto-inhibitory, and has been termed System 1 ethylene. At the initiation of ripening there is a change in the regulation of ethylene biosynthesis, which become auto-stimulatory and involves the induction of specific ripening-related ACO and ACS genes different from those that are responsible for System 1 ethylene (Barry and Giovannoni 2007). Production of ethylene greatly increases due to the autocatalytic regulation, and is known as System 2 ethylene. At the point at which the fruit becomes competent to ripen, there is a transition from System 1 to System 2 ethylene that may be regulated by developmental genes such as RIN (Barry et al. 2000).

Transgenic studies in a number of fruit types have yielded much information about steps in the control of ripening. Tomato fruit with reduced levels of the ripening associated ACC oxidase or ACC synthase, or with depletion of ACC levels using a bacterial ACC deaminase, developed and grew normally but ripening was delayed or almost completely prevented, depending on whether the fruit were attached to the plant or detached (Barry and Giovannoni 2007). Gassing of the ethylene-suppressed fruit with exogenous ethylene caused ripening to resume. Work on melon and apple found that the effects of the suppression of ethylene biosynthesis depended on the species and the extent of suppression achieved. Colour development, fruit softening, the accumulation of sugars and organic acids, and the production of aroma volatiles could in some cases be separated. For example, in antisense ACO melon fruit, degreening of the rind, softening and the accumulation of organic acids were sensitive to different levels of ethylene, and flesh pigmentation was ethylene independent. Such experiments show that ethylene does not control all the processes of ripening as once believed, and that additional regulation by other hormones and developmentally controlled factors occurs (see Section 11.5.2). Ripening is a series of parallel processes involving both ethylene-independent and ethylene-dependent pathways, the latter requiring different sensitivities to ethylene to proceed. This leads to a model whereby ethylene acts as a modulator to coordinate ripening in a developmentally choreographed pattern (Johnston et al. 2009).

The other important factor in the regulation of fruit ripening is the way in which plants perceive ethylene and the signal transduction pathway that leads to the ethylene response (see Chapter 9). In summary, ethylene is perceived by receptors that are negative regulators of the signalling pathway. In the absence of ethylene the receptors actively supress ethylene responses, but when these receptors bind ethylene they undergo a conformational change, leading to removal of the suppression and this allows de-repression of the signalling pathway. The signal is transduced through a MAP kinase pathway that ultimately leads to the stabilisation of a class of EIN3 (ETHYLENE INSENSITIVE 3) transcription factors. The EIN3 name originated from the ethylene insensitive phenotype observed in Arabidopsis mutants. The stabilisation of EIN3 leads to an increase in the transcription of genes associated with each ripening trait.

Ethylene receptors are multi-gene families (six genes in tomato) encoding two types of closely related proteins, one subfamily with a histidine kinase domain and the other subfamily with a serine/threonine kinase function. In Arabidopsis the receptors appear to act redundantly since removal of any one by mutation does not cause complete insensitivity to ethylene. However, this is not the case in tomato, where suppression of either of two receptor genes caused an early-ripening phenotype (Kevany et al. 2007). The importance of receptors in tomato fruit ripening has also been shown by the semi-dominant mutant Never-ripe (Nr), the fruit of which are unable to ripen. This was found to be due to a mutation in the ETR3 receptor, making the fruit impaired in its ability to perceive ethylene. Antisense inhibition of this mutant gene restored normal ripening to the Nr mutant (Hackett et al. 2000).

In tomato the turnover of receptors (degradation of existing receptor proteins and the synthesis of new ones) controls the timing of ripening (Kevany et al. 2007). During ripening some ethylene receptors increase in transcription and it appears that receptor expression is used to restore the ability to respond to ethylene, implying that there is a corresponding loss of receptor protein. This suggests a model in which during climacteric fruit ripening there is an increase in receptor turnover, allowing the fruit the ability to rapidly turn off ripening if ethylene is removed from the system. This is observed in tomato, apple and kiwifruit suppressed in ACO expression, which require continuous exposure to exogenous ethylene for ripening. It is also the basis for the temporary inhibition of ripening obtained using 1-methylcyclopropene (1-MCP), a compound that binds irreversibly to the existing ethylene receptors and prevents the physiological action of ethylene (Sisler and Serek 1997) (see section 11.6.4).