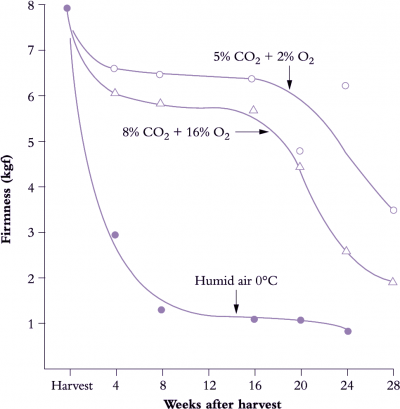 The storage life achievable by refrigerated storage can be extended by modifying the store atmosphere by reducing the oxygen and increasing the carbon dioxide concentrations. Elevated CO2 and reduced O2, used either separately or together, can delay ripening and slow the onset of senescence (Figure 11.20). When both high CO2 and low O2 concentrations are combined then the beneficial effects may be additive. These methods were originally developed on a commercial scale for apple, but have been progressively applied to many other fruit. Container shipping helped their introduction because a sealed container made it easier to maintain the required temperature and atmosphere regimes.

For the bulk storage of fruit in bins, packs of fruit on pallets, coolstores, ships’ holds and individual shipping containers, an active process called controlled atmosphere (CA) may be operated. In these, the concentrations of O2 and CO2 are monitored and maintained at predetermined levels. Initial low O2 concentrations may be achieved through the use of nitrogen generators or O2 scrubbers, or the fruit may be allowed to reduce the O2 concentration through respiratory activity. To prevent the O2 concentration from becoming too low, air can be exchanged with the atmosphere. CO2 accumulates from respiration, but can be prevented from increasing excessively by absorbing it with lime, by removal with an activated carbon scrubber or by purging from the store with nitrogen. In a closed CA system it is also possible to scrub ethylene out of the atmosphere. The removal of ethylene is particularly important for ethylene sensitive fruit such as kiwifruit, where even low levels (e.g. 30 ppb) in the store atmosphere can reduce the storage life of the fruit.

A more recent approach to CA storage is termed dynamic CA storage, in which the O2 concentration in the store is determined by the response of the fruit. Dynamic CA optimises the CA process, since using a predetermined atmosphere tends to err on the side of safety by setting the O2 concentration well above the lowest safe level to allow for the variability in low O2 tolerance amongst fruit from different orchards or seasons. Although this eliminates the risk of fruit becoming anaerobic, it also reduces the potential benefit. While early attempts at dynamic CA utilised ethanol sensors to detect if fruit metabolism was becoming anaerobic, it was the development of a fluorescence sensor that could give a rapid measurement of the fruit response to low O2 stress that allowed the commercialisation of dynamic CA. The sensor is placed over a sample of the fruit in the store, the O2 concentration is decreased until a response is detected from the fruit and then the O2 concentration is increased slightly above the low O2 stress point. The procedure can be repeated throughout the storage period so that the O2 concentration can be continually matched to the capacity of the fruit to withstand low O2.

An alternative way of utilising the beneficial effects of low O2 and high CO2 is termed modified atmosphere (MA) storage. In this system, fruit respiration is used to reduce the concentration of O2 and increase that of CO2 inside an enclosed space, usually the export box or retail packs. The fruit is prevented from becoming anaerobic by making such enclosures out of plastic films that are partially permeable to O2 and CO2. Both gases come to an equilibrium based on respiration rate, the specific permeability of the film, the surface to volume ratio of the package and the amount of fruit in the package. Hence, this form of storage is highly dependent on being able to control the fruit temperature, since this determines the rate of respiration. The independence of having fruit in smaller packages that can be moved intact throughout handling and retailing suggest that MA may be more versatile than CA, although in practice any inability to maintain adequate cold-chain conditions can result in fruit spoilage as packages turn anaerobic at higher than desired temperatures.

Coating fruit in waxes or other compounds may act in a similar way to MA, by modifying the gas permeability of the fruit skin, thereby reducing the flow of O2 in and CO2 out of the fruit. As with MA, if the restriction of oxygen flow into the fruit is too great, the fruit may turn anaerobic and ferment.

How do altered atmospheres delay ripening and retard senescence? There are several possibilities, mostly involving fruit respiration and ethylene metabolism. One common observation is that fruit respiration is suppressed in response to the changed atmosphere. This could occur via acidification of the cytosol, resulting from an elevated CO2 concentration redirecting metabolism towards alcohol or lactate/succinate or malate production rather than CO2 production. Another alternative is a direct effect of ultra-low O2 concentrations (<2%) on cytochrome c oxidase in the mitochondrial electron transfer pathway, preventing that enzyme from functioning properly.

Fruit differ with respect to critical values for tolerance to low O2 or high CO2 concentrations, and ideally we might make a model for predicting the tolerance limits for a new cultivar or fruit from specific background information on its physiological behaviour. However, there is a key problem in manipulating atmospheres by static modelling approaches. The critical gas composition exists within the flesh of a fruit, not in the environment around it, while differences in genetic background cause each cultivar to behave differently with respect to metabolism and thus internal gas composition. Species vary in their response to the altered atmospheres of CA, and can even differ according to cultivar and harvest. This variation is seen in both the final concentration of CO2 and O2 within stored fruit, and in the time taken to equilibrate. Normally, an internal 0.5% (0.5 kPa) partial pressure is the minimum O2 level tolerable, and 10% (10 kPa) is the maximum for CO2.

Conditions during storage are especially critical because optimum levels of CO2 and O2 are on the threshold between aerobic respiration (desirable) and anaerobic respiration (undesirable). Fruit differ in their sensitivities to anaerobic respiration, but are normally intolerant of prolonged periods (>3 days), after which disorders and off-flavours appear. Yet the anaerobic metabolites ethanol and acetaldehyde are common volatiles of many ripe fruit, and treatment with these metabolites, or short anaerobic periods before storage, can have beneficial effects on storage life in some fruit, although they are not used commercially. Fruit in which ethanol and acetaldehyde have been induced are able to metabolise these compounds without tissue damage. The effect of anaerobic metabolism is therefore likely to be a question of degree: how much anaerobic metabolism and how sensitive is the tissue?

'Hayward' kiwifruit is a good example of where CA storage can be successful in prolonging storage life. Both low O2 (2%) and high CO2 (5%) can independently improve firmness retention during storage, with a synergistic effect when used in combination. However, whilst effective in retarding ripening, there are risks to the fruit. The greatest firmness retention is achieved by a rapid establishment of the CA, although too rapid establishment of 5% CO2 can result in increased physiological disorders and rots. Also, concentrations of CO2 at about 10-15% can result in a differential softening of the fruit flesh and core, resulting in a core that is firm relative to the pericarp tissues.