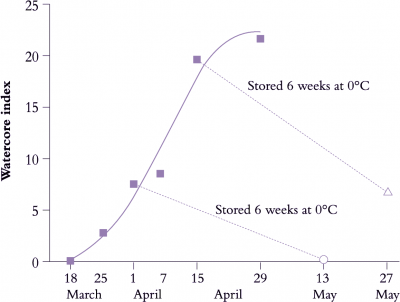 When fruit are put into storage, they are on a slow path to senescence and death, and a number of disorders can arise during that time. Several storage disorders have physiological origins, which may be chilling related, and are often highly specific to species, cultivar, season and even growing region. Fruit maturity at picking is one important factor (Figure 11.21), with less mature fruit generally being more susceptible to chilling injury.

Sensitivity to storage disorders depends on many factors, including maturity at harvest, a lack or imbalance of nutrients and adverse growing conditions. Even if fruit are susceptible at harvest, the expression of disorder symptoms is dependent on storage conditions and duration, and symptoms may not always develop. The development of chilling injury is often described as a time by temperature relationship, i.e. it develops sooner at lower temperatures. This is true for damage that is a direct result of exposure to low temperature and which is seen almost immediately after exposure. However, many chilling disorders develop only after long periods in storage and are associated with an inability of fruit to ripen correctly at low temperatures (e.g. kiwifruit, peach, avocado). It seems that at low temperatures the natural highly co-ordinated process of ripening is disrupted by an element that is temperature sensitive. If removed from storage early enough, no symptoms of chilling develop when the fruit ripens at higher temperature.

Thus far, chilling damage has been described as a single disorder, yet there are numerous symptoms that may develop in the fruit flesh or skin that differ among species and cultivars. In addition, there are disorders that develop as fruit start to senesce, irrespective of storage duration or temperature, and that may have similar symptoms to chilling injury in the fruit flesh. 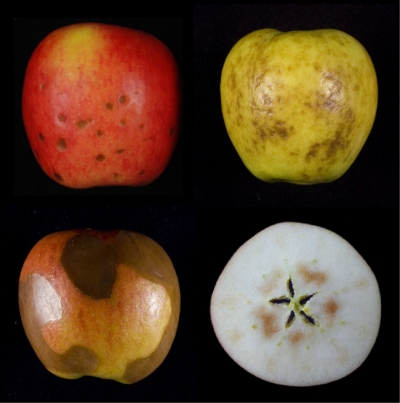 Figure 11.22. Physiological disorders of apple fruit. The top left panel shows bitter pit, a disorder associated with calcium deficiency. It can be partially controlled by preharvest sprays of calcium salts directly onto the fruit. The top right panel shows superficial scald, a low temperature disorder of the skin that can be controlled by 1-MCP treatment prior to cool storage. The bottom left panel shows soft scald, a low temperature disorder with symptoms of brown lesions that extend into the flesh. Incidence can be increased by over-maturity of the fruit at harvest and preharvest climatic conditions. The bottom right panel shows core flush, a browning within the core line, that is a form of senescent breakdown.

Bitter pit is a brown, bitter pitting of the skin in some cultivars, particularly ‘Cox’s Orange Pippin’. It occurs as sunken discoloured pits in the skin with spongy, dry brown flesh beneath. It is primarily a response to inadequate calcium content, and can be greatly reduced by spraying fruit on the tree with calcium-containing solutions during the later stages of fruit development.

Superficial scald is a brown discolouration of the skin surface, particularly in cultivars like ‘Granny Smith’. It appears to be connected with the accumulation of the hydrocarbon α–farnesene in susceptible cultivars, the oxidation products of which are brown and may cause cell collapse. Superficial scald can be reduced by a postharvest dip in an antioxidant free-radical scavenger like diphenylamine (DPA). As a postharvest chemical treatment, DPA is being phased out, and in some circumstances the use of 1-MCP before cool storage may mitigate scald expression, since the production of α–farnesene is promoted by ethylene.

Less is known about the factors that affect the occurrence of soft scald, which can occur most frequently on cultivars ‘McIntosh’ and ‘Jonathan’. Soft scald or deep scald develops as sharply-defined brown lesions on the skin that usually extend into the flesh. Soft scald is a low temperature disorder, partially avoided by slow (delayed) cooling or by storing at slightly warmer temperatures. Its causes are unclear, but incidence is increased by factors including over-maturity of the fruit at harvest, and by dull, cool, wet summers.

Core flush, most serious in ‘McIntosh’, is a browning of internal fleshy tissues surrounding the core of a fruit, and may have more than one cause. One factor seems to be the O2 supply to the core, since conditions potentially causing anaerobiosis (large size, a closed and airtight calyx and a low-O2 atmosphere) increase incidence. It is most serious in fruit stored for long periods at around 0°C, and may be greatly reduced by storage at 4°C under CA.

Figure 11.23. NMR images from the equatorial plane of an apple show watercore (waterlogging) as an intense white region. The first scan (left) was taken from a Fuji apple with severe watercore at the time of harvest. The second scan (right) was taken of the same fruit after cool storage for 15 weeks at 0°C, when symptoms had disappeared due to reabsorption of apoplastic water. Scale bar = 1 cm. (Original images courtesy C.A. Clark)

Watercore (Figure 11.23) is a condition where there are glassy, waterlogged sections of tissue towards the centre of the fruit, typically centred around the vascular bundles. Severe watercore leads to anaerobiosis, development of fermentation aromas, and core browning similar to core flush. Fuji is an especially susceptible cultivar. Watercore is more severe in sweet fully mature fruit (Figure 11.21) and involves a breakdown in transport of sorbitol across cell membranes. As outlined earlier (Section 11.3.2), sorbitol is the main soluble carbohydrate supply for early growth in apple fruit. Unlike other storage disorders, watercore becomes less severe or even disappears during storage (Figure 11.23) presumably because pericarp cells eventually take up intercellular water and sugar and allow airspaces to reform.