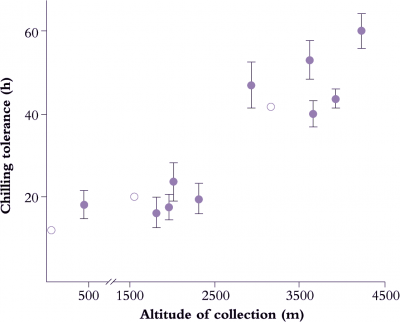 Figure 14.19. Increasing chilling tolerance of wild species of potato and tomato with increasing altitude implies an adaptation to that location. Each point represents a different species of Solanum (●), or variant of Lycopersicum hirsutum (O), originally collected at the altitude indicated in the graph and grown under similar field conditions at sea level. Chilling tolerance determined by the chlorophyll fluorescence method. (Original data courtesy R.M. Smillie)

Plants are commonly reported in scientific literature as being either chilling sensitive or chilling tolerant. This can be a misleading simplification, because in practice when a range of plants are compared for chilling tolerance there is an almost continuous gradient of tolerance between the two extremes (Table 14.2). Tolerance of an individual species is likely to be related to the lowest prevailing temperature in the original habitat of that particular species.

Progressive changes in chilling tolerance have also been documented in closely related plants naturally distributed over latitudinal or altitudinal clines. Growth at high altitudes and also at high latitudes represents a selection pressure for cold tolerance. Wild species of potato restricted to ecological niches within narrow spans of altitude in the Andean mountains of Peru and Ecuador provide a good example of how chilling tolerance changes along an altitudinal cline. Variants of wild tomato (Lycopersicum hirsutum L.) collected in the same regions as the potatoes behaved similarly, with chilling tolerance increasing with altitude (Figure 14.19). 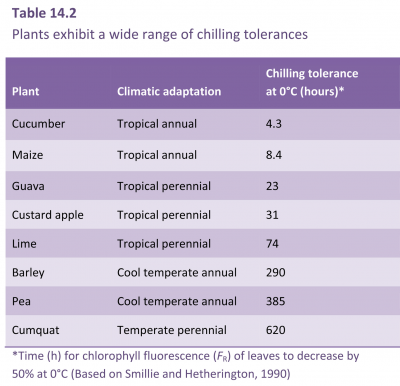