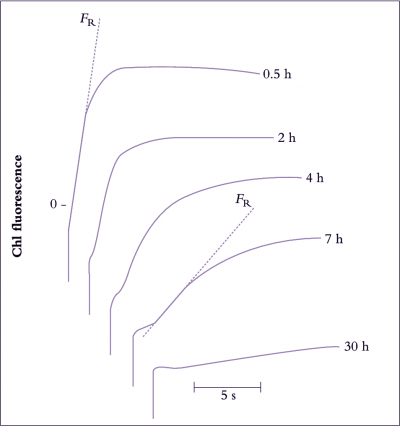 Figure 14.18. Changes with time in in vivo chlorophyll a fluorescence induction kinetics in response to chilling. In chilling studies, chlorophyll fluorescence has commonly been measured as the rate of rise in fluorescence yield induced by illuminating dark-adapted tissue (the FR value). In isolated chloroplasts, a decrease in photosystem II activity is correlated with a decrease in FR (Smillie and Nott 1979). This figure shows the progressive decline in FR in a trifoliate bean (Phaseolus vulgaris L. cv. Canadian Wonder) leaflet chilled at 0°C in darkness. The first measurement of FR was made after allowing 30 min at 0°C for temperature equilibration of the leaflet. The measurement was repeated on the same area of the leaflet at the times indicated on the figure. The longer the time of` chilling, the greater the degree of chilling injury, and the slower the rate of rise of FR. The greater the chilling sensitivity of a cultivar, the shorter the time taken for a 50% decrease in FR (Original data courtesy R.M. Smillie)

One chilling response is a loss of membrane integrity. This loss has been measured by the extent of electrolyte leakage from cut pieces of chilled tissue. Other physiological methods used to quantify chilling injury include determinations of chlorophyll in seedlings kept at different temperatures, uptake of amino acids into pieces of chilled tissue, comparisons of fruit ripening rates and post-chilling measurements of plant growth and survival.

Pollen development is particularly sensitive to chilling temperatures, and assessments of pollen quality and anther length have been used to select specific genotypes of rice, tomato and other plants showing improved flower fertility under chilling conditions. However, though improved flower resistance to cold conditions is a desirable end-product in its own right, pollen resistance does not appear to be genetically linked with resistance of vegetative tissue to chilling stress.

A particularly versatile physiological method for following chilling stress in photosynthetic tissues makes use of in vivo chlorophyll a fluorescence. When plants become chill injured, fluorescence yield decreases (Figure 14.18) in response to effects of chilling on the photosynthetic system (Smillie and Nott 1979). The time taken for a 50% decrease in fluorescence has been used to compare the relative chilling tolerances of different species and cultivars. Using chilled maize seedlings the extent of the decrease in fluorescence has been positively correlated with physiological and visual symptoms of chilling injury (Hetherington and Öquist 1988).