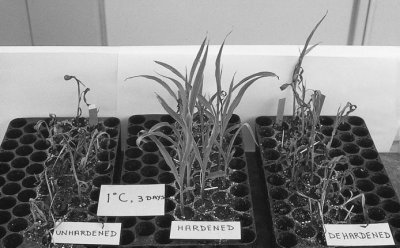 Figure 14.20. The ability to survive chilling stress is increased in chill-hardened maize seedlings. Unhardened, hardened and dehardened seedlings (see text) were chilled at 1°C for 3 d and then placed at 20/15°C for 3 d to allow symptoms of chilling injury to develop. (Based on Hetherington and Öquist, 1988)

Differences between species imply a genetic basis to variation in chilling tolerance, and this adaptive response includes a further element, namely acclimation. Tolerance shown by individuals of a particular species can be increased by exposing plants to progressively lower but only marginally chilling temperatures. This process is variously called ‘acclimation’, ‘hardening’ or ‘conditioning’. Chill hardening of plants appears to bring about changes in their metabolism, including an increase in unsaturation of membrane lipids, and allows plants to withstand subsequent and more severe stress. Such enhanced tolerance is generally lost within a few days of returning to warmer regimes, a process called ‘dehardening’.

Maize seedlings provide an example of this reversible process (Figure 14.20). Hardening has a dramatic effect on survival of seedlings subsequently exposed to a chilling stress of 1°C for 3 d. Seedlings were first hardened for 4 d in a 15°C day, 5°C night regime. Dehardening was achieved by returning the hardened plants to the original growth regime (20°C day, 15°C for 2 d). Chilling tolerance monitored by chlorophyll fluorescence measurements increased three-fold as a result of this hardening process.

In conclusion, chilling injury can occur in the field and in postharvest storage, especially when crop or horticultural species have been introduced from warmer climates. Produce losses due to chilling injury are frequently overlooked because symptom expression often takes several days to develop after the produce is returned to a non-chilling environment. A combination of better management and introduction of chilling-tolerant genotypes can reduce postharvest losses.