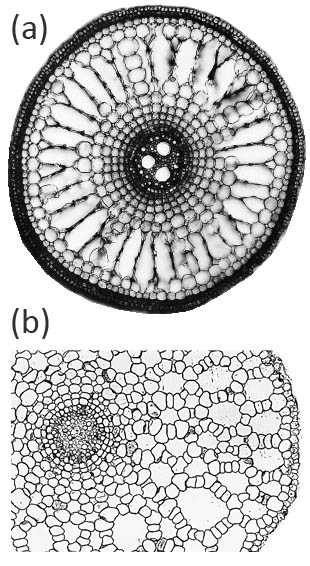 Aerenchyma can form in the cortex of roots by two main, distinct, developmental processes: (i) lysigeny - the collapse of files of cortical cells to leave behind gas-filled voids (Figure 18.9a), or (ii) schizogeny - cell separation in a radial direction, so that large gas-filled channels form between cells (Figure 18.9b). Lysigenous aerenchyma results from selective programmed cell death in the cortex and this type occurs in many monocots, including important crops (e.g., barley, wheat, maize, rice). Schizogenous aerenchyma is formed by separation of cells (without death) and is found in some wetland species and particularly dicots (e.g., Rumex spp.). The ‘honeycomb-type’ schizogenous aerenchyma shown in Figure 18.9b for Rumex hydrolapathum forms due to cells being forced apart owing to oblique divisions by some of the cortical cells in radial rows.

Aerenchyma formation can be quantified by taking root cross-sections and measuring areas of gas-filled spaces relative to the total cross-sectional area. Many studies have quantified root porosity, the gas-filled volume per unit of root volume, and porosity includes the total gas volume in the roots (i.e. large aerenchyma channels plus the smaller intercellular spaces). Porosity in roots of plants grown in waterlogged soil varied from below 1% in some non-wetland species to as much as 53% in one wetland species, demonstrating the wide variation amongst species in their capacities for internal aeration of their roots when in waterlogged soil (Justin and Armstrong, 1987).

The importance of high porosity for root growth in waterlogged soil was demonstrated in a study of 91 species differing in aerenchyma volumes; species with roots of < 5% porosity penetrated only 30-95 mm, whereas those with > 35% porosity grew 150-345 mm into a waterlogged potting mix (Justin and Armstrong, 1987). Mathematical modelling has also highlighted the importance of root porosity for internal O2 diffusion and therefore root growth in anaerobic substrates (Armstrong, 1979). O2 supply via aerenchyma determines the respiratory activity and therefore energy status in roots, as demonstrated by measurements of adenylate energy charge (AEC) in root tips of maize seedling roots in an O2-free medium (Drew et al., 1985). For roots reliant on an internal O2 supply, the AEC was ~ 0.7 for tips of roots with aerenchyma (porosity ~13%), compared with ~ 0.4 in those without aerenchyma (porosity ~4%). Thus, O2 supplied via the aerenchyma enables respiration and the ATP produced is essential for the survival, functioning and growth of roots in waterlogged soil. 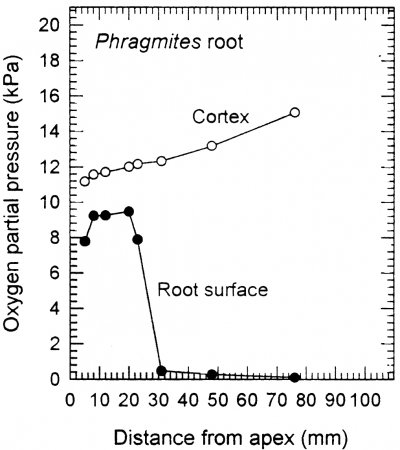 Figure 18.10. Profiles of O2 with distance behind the apex of the main axis of an intact adventitious root of Phragmites australis, when in an O2-free medium with shoots in air. O2 within the root cortex increases at positions closer towards the root-rhizome junction, consistent with higher concentrations towards the source of O2 diffusing down the root. By contrast, O2 on the exterior of the root surface is highest near the tip, and very low in the basal part of the root. A barrier to radial O2 loss largely prevents O2 movement to the rhizosphere in these basal positions (see also description in the text). Jackson and Armstrong (1999).

In addition to large volumes of aerenchyma (i.e. high porosity), roots of many wetland plants also possess a barrier to radial O2 loss (ROL) in the root exterior (Armstrong, 1979; Colmer, 2003). The ROL barrier diminishes losses of O2 to the rhizosphere and thus enhances longitudinal diffusion towards the root apex. Loss of O2 from roots to waterlogged soil can be substantial, owing to the steep concentration gradient from root-to-soil. Many, but not all, wetland species can restrict O2 losses from the basal parts of their roots. An example of a functional barrier to ROL is shown in Figure 18.10 for a root of common reed (Phragmites australis). When in a low O2 medium, the concentration of O2 at the root surface was relatively high near the tip, but it was extremely low at 30 mm and further behind the apex. This pattern of low surface O2 in basal regions, despite the internal O2 being higher towards the root base (closer to the O2 source), indicates a high resistance to ROL across the outer cell layers in sub-apical positions. This resistance to radial O2 diffusion results from suberin depositions in the hypodermis/exodermis. A ‘tight’ barrier to ROL develops constitutively in the basal zones of adventitious roots of many wetland species, but was induced by growth in stagnant deoxygenated medium in several others, including rice (Colmer, 2003).

Even for roots with a ‘tight’ barrier to ROL, losses of O2 are substantial near the root tip, and also from laterals. ROL around the root tip protects this sensitive growing point from reduced toxins, as these would be re-oxidised as the tip advances into the otherwise anaerobic soil (e.g. Fe2+ oxidised to insoluble Fe2O3). Thus, ROL may ‘protect’ the apex against reduced toxins, with the barrier to ROL loss in mature zones not only restricting exit of O2 but also excluding reduced phytotoxins in the soil.

‹ 18.4 - Internal aeration - aerenchyma and morphological adaptations up 18.4.2 - Through-flows of O2 along rhizomes of some wetland plants ›
Back to top