When electrons are transferred from NADH to O2, a large release of redox energy enables ATP formation in complex V of the respiratory chain (Figure 2.24). Energy release associated with electron transport is conserved by H+ translocation across the membrane to form a proton electrochemical gradient (ΔµH+) that has both an electrical membrane potential (Δψ) and a pH component (ΔµH+ = Δψ + ΔpH). This is known as the chemiosmotic theory and was originally proposed by Peter Mitchell in 1960s. In plant mitochondria, ΔµH+ exists mainly as a Δψ of ~150–200 mV, with a pH gradient (ΔpH) of ~0.2–0.5 units. ATP synthesis occurs as H+ move from a compartment of high potential (the intermembrane space) to one of low potential (the mitochondrial matrix) through the ATP synthase complex. Oxidation of NADH via the cytochrome pathway has three associated H+ translocation sites and is linked to synthesis of up to three ATP molecules for each molecule of NADH oxidized. By contrast, both succinate and alternative NADH oxidation by the rotenone-insensitive NADH dehydrogenases (see below) are linked to the synthesis of only two ATP molecules per NADH or succinate, as these events are associated with only two H+ pumping sites. 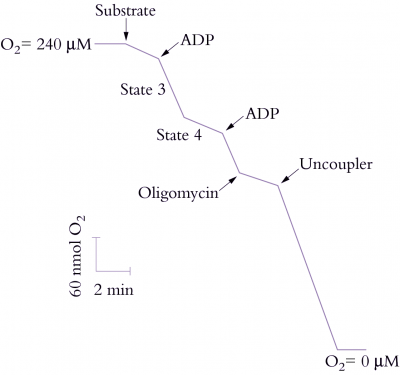 Figure 2.26. Stylised O2 electrode recording of respiring plant mitochondria illustrating respiratory control. Oxygen consumption is measured as a function of time. The isolated mitochondria are depleted of substrates and are therefore dependent on added substrates and effectors. Addition of ADP (Pi is in the reaction medium) allows oxidative phosphorylation to proceed, dissipating some of the electrochemical gradient (ΔµH+) and thereby stimulating electron transport; the enhanced rate of O2 uptake is called State 3. When all the ADP is phosphorylated, electron transport slows to what is known as State 4. Addition of more ADP stimulates O2 uptake further, but addition of oligomycin, which blocks the ATP synthase, lowers O2 uptake to the State 4 rate. The addition of an uncoupler (protonophore) fully dissipates the electrochemical gradient (ΔµH+) and stimulates O2 uptake; no ATP synthesis occurs in the presence of the uncoupler. When the O2 concentration falls to zero, respiration ceases (Original drawing courtesy David Day)

ATP synthase is a membrane-bound F1F0 type H+-ATP synthase that harnesses the ΔµH+ generated by the ETC to produce ATP. It is composed of a hydrophobic F0 component which channels protons through the inner mitochondrial membrane and also anchors the complex to the membrane and a hydrophilic F1 component which catalyses ATP formation and protrudes into the matrix. The core subunits of the enzyme are highly conserved in both prokaryotic and eukaryotic organisms. In plants, the majority of mitochondrial F1 subunits are encoded in the nucleus and translated in the cytosol before being imported into the mitochondria (including  α, β, γ and ε subunits), while most of the F0 subunits are encoded in the plant mitochondrial genome and translated in the mitochondrial matrix (including a, b, c and A6L subunits).  The reaction mechanism of the ATP synthase is known as the three-site alternating binding site mechanism. According to this model, F1 has three nucleotide-binding sites which can exist in three configurations: one with loosely bound nucleotides, one with tightly bound nucleotides and the third in a nucleotide-free state. H+ movement through F0 results in rotation of F1, causing a conformational change during which the site with loosely bound ADP and Pi is converted to one which binds them tightly in a hydrophobic pocket in which ATP synthesis occurs. Further H+ movement then causes another rotation of F1 and the ATP binding site is exposed and releases the nucleotide. In the meantime, the other nucleotide-binding sites are undergoing similar changes, with ADP and Pi being bound and converted to ATP. Thus H+ translocation drives the three sites through three different configurations and the main expenditure of energy is in the induction of a conformational change that releases tightly bound ATP, rather than in ATP synthesis itself. The F0 complex also contains a protein known as the oligomycin-sensitivity-conferring protein (OSCP) because it binds the antibiotic oligomycin that prevents H+ translocation through F0 and inhibits ATP synthesis. Therefore, adding oligomycin to mitochondria oxidising a substrate in the presence of ADP restricts O2 uptake. Generally knockouts of ATP synthase core subunits are lethal in plants, however inducible knockdowns have enabled investigations into the tissue-specific phenotypes incurred by slowing the rates of mitochondrial ADP:ATP cycling at a number of different developmental stages. It has been proposed that the assembly of plant CV comprises of three steps, the first being the formation of a rapidly turned over F1 subcomplex in the matrix, followed by an intermediate stage where F1 associates with the inner membrane and still turns over at a fast rate, and then finally a union of F1 with FO to form functional CV. A number of assembly factors (Atp10, Atp11, Atp12, Atp22, Atp23 and Fmc1) have been discovered for yeast ATP synthase, however, a detailed study of the presence and conservation of CV assembly factors in plants has not been undertaken.

Electron transport through the respiratory chain, and therefore rate of O2 uptake, is controlled by availability of ADP and Pi, a phenomenon described as ‘respiratory control’. In the absence of ADP or Pi, the proton pore of ATP synthase is blocked and a ΔµH+ builds up to a point where it restricts further H+ translocation across the inner membrane. Since electron transport is functionally linked to H+ translocation, this elevated ΔµH+ will also restrict O2 consumption. That outcome is easily seen with isolated mitochondria (Figure 2.26) where O2 uptake is stimulated by adding ADP (‘State 3’ respiration). When all of the added ADP has been consumed, O2 uptake decreases again (‘State 4’). In steady state, the rate of electron flow is determined by the rate of flow of H+ back across the membrane: when ADP and Pi are available the backflow is rapid and occurs via ATP synthase; in the absence of these compounds, backflow is by slow diffusion through the membrane.

The ratio of State 3 to State 4 (the respiratory control ratio) is thus an indication of coupling between ADP phosphorylation and electron transport. Larger values represent tighter coupling. The proton leak can be dramatically stimulated by some compounds which act as protonophores or proton channels; these compounds collapse the ΔµH+ and increase O2 uptake up to the State 3 rate (Figure 2.26). However, no ATP is formed and these compounds are called uncouplers because they uncouple the linked processes of electron transport and phosphorylation.