Photoassimilate diffuses from roots into the rhizosphere where it is either respired by microorganisms, volatilized, or deposited as organic carbon (‘rhizodeposition’). Some of this photoassimilate loss is in the form of soluble metabolites, but polymers and cells sloughed off the root cap also provide carbon substrates. Grasses undergo cortical cell death as a normal developmental process, providing further carbon substrates to support a rhizosphere microflora. Nitrogen and some other inorganic nutrients which are co-released with plant carbon are often reabsorbed by roots. Extraction of minerals from bulk soil also relies strongly on rhizosphere processes, especially near the root apices. Compounds exuded from roots interact with soil components in direct chemical reactions (e.g. adsorption reactions), through microbially mediated events (e.g. immobilisation reactions) and volatilisation. In addition, complex polysaccharides and glycoproteins of microbial and root origin give rise to a gelatinous mucilage which associates with soil particles to form a rhizosheath. 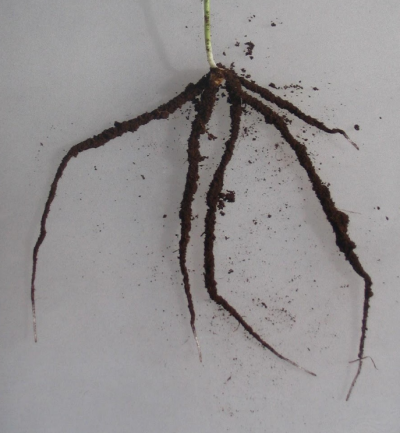 Figure 4.16 Roots of a young wheat plant showing soil attached to roots, the rhizosheath. Only the root tips, without hairs, have no rhizosheath. (Photograph courtesy E. Delhaize)

The rhizosheath is known as the soil that adheres to roots when they are removed from the pot or field Figure 4.16). The amount of soil can vary depending on how gently or roughly the roots are removed. For wheat, at least, the size of the rhizosheath correlates with root hair length. Mutants without root hairs have no rhizosheath. The distinction between the terms rhizosheath and rhizosphere are that the first term refers to the soil that physically adheres, and the second term the volume of soil influenced by the root. Mutants without root hairs would still have a rhizosphere of sorts since the root would still chemically influence its surrounding soil.

Rhizosheaths have physical and chemical implications for root function. Hydraulic continuity between soil and roots is, for example, thought to be enhanced by the hydrated mucigel, which facilitates water uptake by roots in dry soils. Negatively charged groups on side-chains of mucilagenous polysaccharides attract cations like Ca2+, providing exchange sites from which roots might absorb nutrients. The mucigel between the sloughed root cap and root border cells also acts as a lubricant for reducing penetration resistance of the expanding root tip in soil (McKenzie et al. 2012). For example, root elongation through hard soil is greatly reduced if the root cap cells are removed. Once the soil and the mucigel dry up, this lubrication effect is significantly reduced.

Such a diversity of chemical reactions in the rhizosphere is largely an outcome of the array of root-derived exudates. For example, phenolic compounds can be released by root cells in large amounts (Marschner 1995), both as a result of degradation of cell walls and from intracellular compartments. Flavonoids are a group of phenolics that can be specifically exuded into the rhizosphere as signal molecules to attract rhizobia (See section 4.4 on nitrogen fixation). Release of organic acids (principally citric, fumaric and malic acids) solubilises phosphate from surfaces to which they are adsorbed in many species, including those of the family Proteaceae. A modest release of organic acids accounting for about 0.1% of the root mass each week is sufﬁcient to enhance phosphate acquisition in a selection of annual legumes (Ohwaki and Hirata 1992). In more extreme cases, up to a quarter of the dry weight of Lupinus albus plants is released from cluster roots, mostly as citrate (see Case study 4.1). Even the fungal hyphae of mycorrhizal eucalypt and pine roots can secrete photoassimilates, in the form of oxalic acid, causing phosphorus to be solubilised from insoluble calcium apatite (Malajczuk and Cromack 1982).

The main families of low molecular weight compounds which react with inorganic ions are phenolics, amino acids and organic acids. Heavy metals such as aluminium, cadmium and lead are complexed by phenolics, affecting the mobility and fate of these ions in contaminated soils. Flavonoids can chelate iron and make iron oxides available to plants. Manganese is complexed by organic acids, as are ferric ions, which also interact chemically with phenolic compounds and amino acids. For example, highly specialised amino acids (phytosiderophores) can complex ferric ions and enhance uptake from soils by rendering iron soluble. Low iron status actually stimulates release of phytosiderophores into the rhizosphere (Marschner 1995). Other metals such as zinc and copper might also be made more available to the plant through the chelating action of phytosiderophores. Chemical processing by chelating agents is dependent on plant perception of nutrient deﬁciencies, leading to an ordered change in rhizosphere chemistry. A signiﬁcant demand on photoassimilates is required to sustain chelation of nutrient ions.

Enzymes are also released from roots, particularly phosphatases, which cleave inorganic phosphate from organic sources. The low mobility of orthophosphates means that phosphatases can be an important agent in phosphorus acquisition, especially in heathland soils where the native phosphorus levels are low relative to the phosphorus-rich remnants of decaying plant material.

pH is another important rhizosphere property. Roots can acidify the rhizosphere by up to two pH units compared to the surrounding bulk soil through release of protons, bicarbonate, organic acids and CO2 (Figure 4.17). In contrast, the rhizosphere of roots fed predominantly with nitrate was more alkaline than bulk soil. A distinct rhizospheric pH arises because of the thin layer of intense biological activity close to roots, especially young roots. In addition to proton fluxes, release of CO2 by respiring roots and microbes is likely to cause stronger acidiﬁcation of the rhizosphere near root apices where respiration is most rapid.

Rhizosphere acidiﬁcation affects nutrient acquisition by liberating cations from negative adsorption sites on clay surfaces and solubilising phosphate from phosphate-ﬁxing soils. Furthermore, micronutrients present as hydroxides can be released at low pH, conferring alkalinity tolerance on those species with more acidic rhizospheres. So, the rhizosphere is a space which ensheathes particularly the youngest, most active parts of a root in a chemical milieu of the root’s making. In this way, acquisition of soil resources is strongly controlled by processes within roots. Local variations within soil are buffered by rhizosphere chemistry, enabling roots to exploit heterogeneous soils effectively.