As a general rule, the surface area of a root system exceeds the leaf canopy it supports. Even disregarding root hairs, the interface between roots of a three-week-old lupin plant and soil is about 100 cm2 while a four-month-old rye plant under good conditions has more than 200 m2 of root surface (Dittmer 1937). Trees’ root systems are difﬁcult to quantify but kilometres of new roots each year generate hundreds of square metres of root surface. Such a root–soil interface arises through the simultaneous activity of up to half a million root meristems in a mature tree. 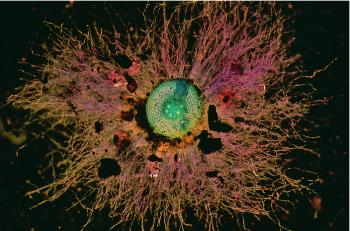 Figure 4.12 Transverse view of a young, soil-grown wheat root, sectioned by hand and stained with Toluidine Blue. Most soil in the rhizosheath was washed away during preparation, revealing many long root hairs extending from the main axis (diameter 0.6 mm). Root hairs allow this root to explore 21 times more soil volume than would be possible without hairs. A lateral root can be seen extending from the pericycle which surrounds the stele. (Photograph courtesy M. Watt)

Many roots form ﬁne extensions to epidermal cells called root hairs, amplifying the effective surface area of the soil–root interface many times. Dittmer (1937) estimated that the surface area of root hairs in rye plants was more than that of the root axes on which they grew; similar observations have been made for trees. The aggregate length of root hairs in the rye plants studied by Dittmer increased 18 times faster than that of the main axes. Thus, up to 21 times more soil is explored when root hairs are present (Figure 4.12).

Root hairs are particularly important in taking up mineral nutrients that are not readily soluble and therefore not mobile in the soil solution, like phosphate. Measurements of the phosphate concentration in soil at different distances from roots show that soil phosphate is depleted only in the zone close to roots, the 1 mm zone, the typical length of root hairs (Figure 4.13).

Anchorage and extraction of inorganic soil resources both call for a large area of contact between roots and soil. However, this vast interface is much more than a neutral interface; events within it allow resources to be extracted from the most unyielding soils. Intense chemical and biological activity in a narrow sleeve surrounding roots, particularly young axes, give rise to a rhizosphere, the volume of soil influenced by the root, a concept first introduced in 1904 by Lorenz Hiltner (Hartmann et al. 2008). The rhizosphere has been estimated to contain up to 1011 microbial cells per gram of soil, and harbour up to or above 30,000 different microbial species, undoubtedly the moxt complex ecosystem on earth (Berendsen et al. 2012). The rhizosphere concept has been extended to include symbiotic mycorrhizal fungi associate with the root (See Section 4.3 on mycorrhiza), and this has been named the ‘mycorrhizosphere’, as most land plants are colonised by mycorrhizal fungi most of the time. 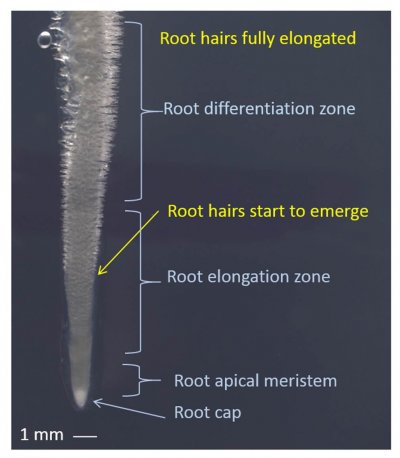 Figure 4.13 Young root tip with elongating root hairs. Root tip of Medicago truncatula showing the approximate zones of root elongation and differentiation relative to the tip. Root hairs are protuberances of epidermal cells that first emerge approximately 4 mm behind the root tip and elongate over the span of about two days until they are fully elongated in the differentiation zone of the root. (Photograph courtesy U. Mathesius)