Mycorrhizal associations are classiﬁed according to the way in which the fungi interact with the host plant root, in particular, the structure of the interface that forms between host cells and fungal hyphae. This classiﬁcation leads to a number of distinct types of mycorrhizal association, as defined in Table 4.1. However, only two of these are widely distributed in the plant kingdom: arbuscular mycorrhizas (AM) and ectomycorrhizas. Orchid and ericoid mycorrhizas are conﬁned to genera within the Orchidaceae and Ericaceae families, respectively. 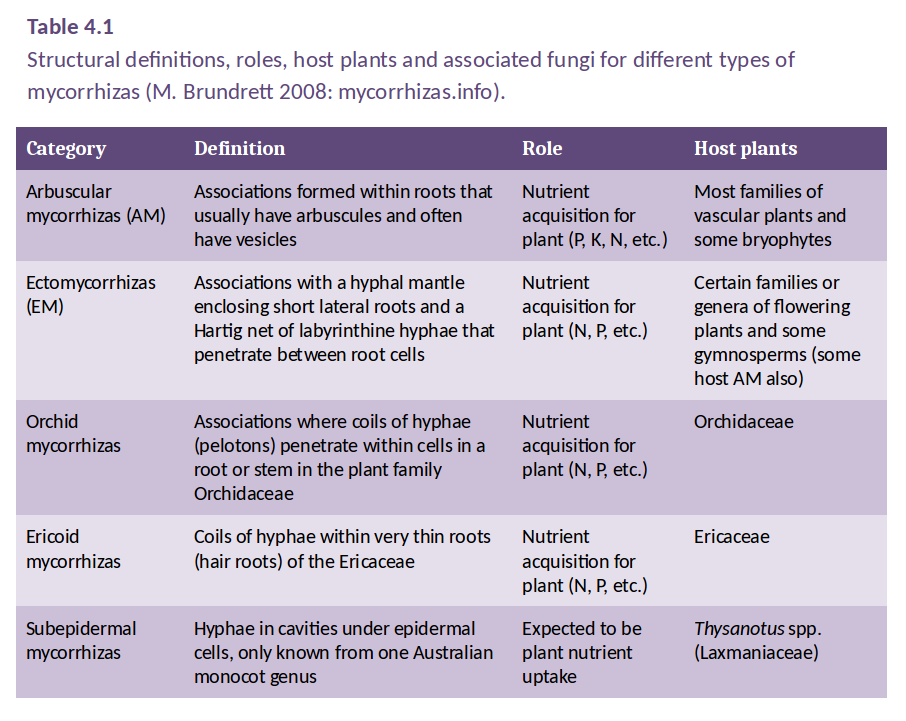 Table 4.1 shows that the main types of mycorrhizas differ in host preference and in the structures they form during association with the host root, but they are similar in the ways by which they enhance host plant nutrition. Each type of mycorrhiza can be formed by many species of fungi and a single root may often be colonised by more than one species.

Plants with arbuscular mycorrhizas are common in most ecosystems, but are more likely to be dominant in regions of relatively high mean annual temperatures and rates of evapotranspiration, where phosphorus availability is often the major limiting factor for plant growth. However, in some soils with very low phosphorus availability, nonmycorrhizal plant species with cluster roots may be locally dominant and these plants seem to be more efficient at obtaining phosphorus from these soils than mycorrhizal species (e.g. south west Western Australia).

Ectomycorrhizas are most common in tree species, but also occur in some shrubs. In the Northern hemisphere, ectomycorrhizal associations are typically dominant in boreal forests where temperatures and evapotranspiration are relatively low, leading to slow rates of decomposition and accumulation of plant litter in soil and low nitrogen availability. However, ectomycorrhizal plants are also dominant or co-dominant in many other temperate forests, as well as some tropical and subtropical areas, where soil properties are not substantially different from habitats where only arbuscular mycorrhizal plants occur.

Each type of mycorrhizal association has evolved separately to enhance growth and survival of both the host plants and the mycorrhizal fungi. While the primary role of these associations is to increase nutrient supply to the host plant, mycorrhizas have also been shown under some circumstances to enhance plant water status, confer protection against root pathogens, contribute to soil structure through hyphal binding of soil particles and other processes, and render plants less susceptible to toxic elements. The relative importance of these secondary roles is very difficult to determine since they are difficult to separate from nutritional benefits to plants in experiments and they will not be considered in detail here.

‹ 4.3 - Mycorrhizal associations up 4.3.2 - Development and structure of mycorrhizas ›
Back to top