4.3.2 - Development and structure of mycorrhizas 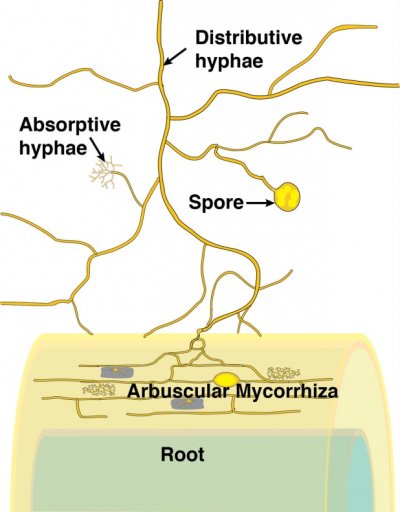 Arbuscular mycorrhizal associations are formed by fungi from division Glomeromycota, class Glomeromycetes. DNA sequence evidence shows they are closely related to the Zygomycota. These fungi simultaneously exist in both the soil and roots, with different forms of hyphae in each environment, as shown in the diagram below (Figure 4.23).

During the infection process, fungal hyphae penetrate the epidermal cell layer, often forming distinctive large hyphae within the root at the point of entry (Figure 4.24). From the entry point, hyphae then spread through the root cortex by growing either through the intercellular spaces or from cell to cell by penetrating the cell walls. Hyphae do not, however, penetrate the endodermis or enter the stele.

Figure 4.24 Left, Root of clover (Trifolium subterraneum) colonised by an arbuscular mycorrhizal fungus. The fungus has formed thick entry hyphae in the epidermis before spreading through the cortex cells, forming an arbuscule (A) in many cortex cells and some vesicles (V). Roots were cleared (to make them transparent) and then stained with Trypan blue. Right, Root of leek (Allium porrum) colonised by indigenous mycorrhizal fungi showing hyphae, arbuscules and many large vesicles. (Photographs courtesy M. Brundrett)

Within individual cortex cells, hyphae may form a distinctive structure called an arbuscule. From the base of each arbuscule, hyphae repeatedly branch, becoming thinner and thinner as they do so (Figure 4.25). The host cell plasma membrane is never penetrated by the fungus. 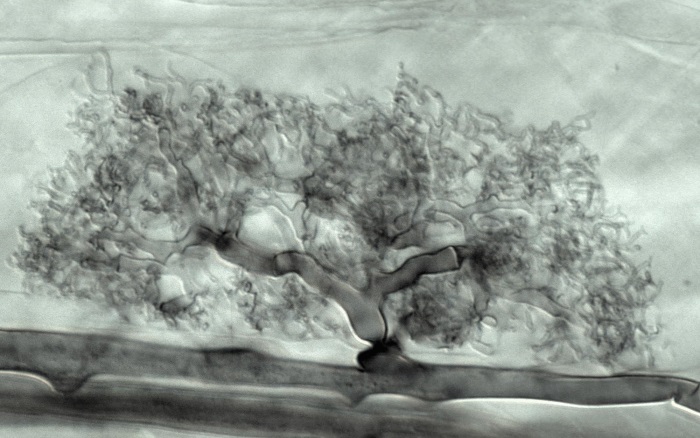 Figure 4.25 Longitudinal view of a mature arbuscule of an arbuscular mycorrhizal fungus which has formed in a root cortical cell of leek (Allium porrum). Roots were cleared, stained with Chlorazol black E and viewed with interference contrast microscopy. (Photograph courtesy M. Brundrett)

Thus in a cell with an arbuscule, the host cell plasma membrane remains intact and functional, but proliferates to surround the arbuscular branches (Figure 4.26). The highly-branched nature of arbuscules is thought to increase the surface area to volume ratio of the host plant plasma membrane by up to 20-fold, relative to unoccupied root cells, thus providing an extensive interface across which nutrient exchange can take place (Figure 4.26). 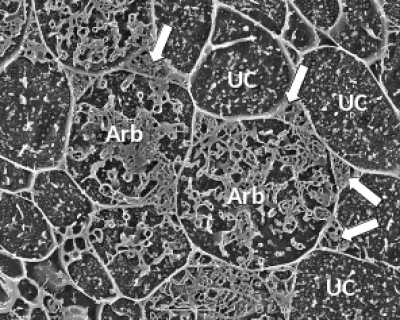 Figure 4.26 A transverse view of cortex cells in frozen roots of white clover (Trifolium repens) colonised by indigenous arbuscular mycorrhizal fungi. In uncolonised cells (UC), the plasma membrane is so closely aligned to the cell wall that it cannot be distinguished and what can be seen inside the cell are dots and lines formed by solutes frozen in the cell vacuole. However, some cells contain the many small hyphae of mature arbuscules (Arb) which have the plasma membrane encasing them and large hyphae are evident occupying most of the intercellular spaces surrounding these cells (arrows). Roots were frozen in liquid nitrogen and viewed using cryo-scanning electron microscopy. (Photograph courtesy M. McCully)

When we consider that all fungal biomass was built using plant carbon, it becomes evident that considerable carbon is needed to maintain the symbiosis.

Ectomycorrhizal symbioses are formed primarily by higher fungi in the Basidiomycotina and Ascomycotina, which form mycorrhizas with the short lateral roots of trees (Table 4.1). Unlike arbuscular mycorrhizas and ericoid mycorrhizas, hyphae of ectomycorrhizal fungi do not normally penetrate host cell walls. Rather, they form an entirely extracellular interface, with highly branched hyphae growing between epidermal or cortical cells, forming a network known as the Hartig net (Figure 4.27). 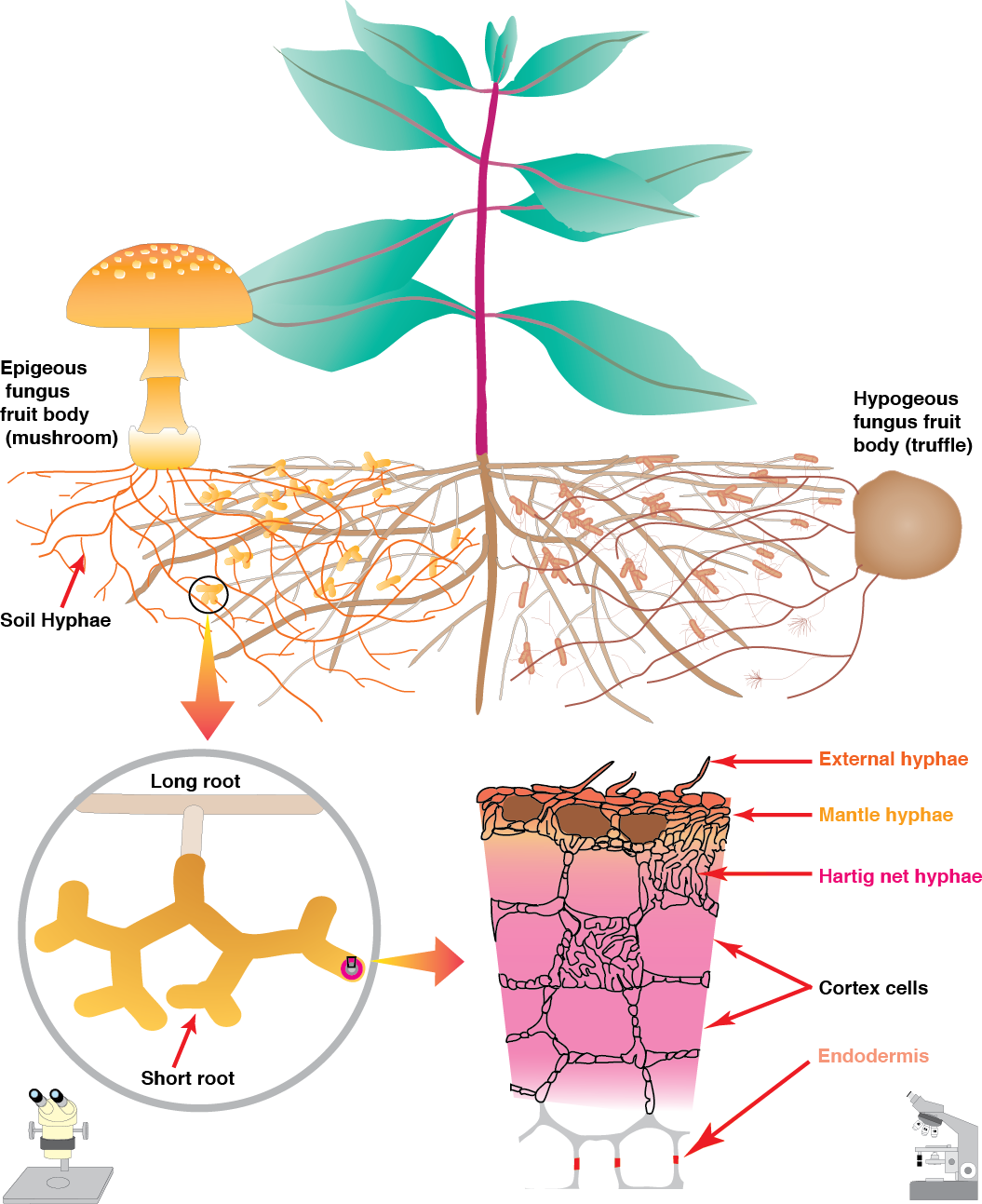 In Gymnosperms such as Pinus, the Hartig net may extend through most of the root cortex, but in most Angiosperms it is confided to the epidermis (Figure 4.28). In both cases, the highly branched hyphae of the Hartig net provide a substantial surface area for nutrient exchange between the fungus and the plant. Ectomycorrhizas are further differentiated from the other mycorrhizal types by the fact that the fungus usually forms a dense hyphal mantle around each short lateral root, greatly reducing its contact with the soil (e.g. Figure 4.28).

Orchid mycorrhizal associations consist of coiling hyphae within cells of a root or stem (Figure 4.29). The most common fungi involved are members of the Rhizoctonia alliance, but ectomycorrhizal fungi are also found in some orchids, especially in achlorophyllous species lacking photosynthesis. A key feature of orchid mycorrhizas is the capacity of fungi to germinate the tiny seeds of orchids to form tiny protocorms which lack roots or leaves. It is thought that orchids start out by exploiting fungi, but then may develop more mutualistic associations as they grow larger and develop leaves. 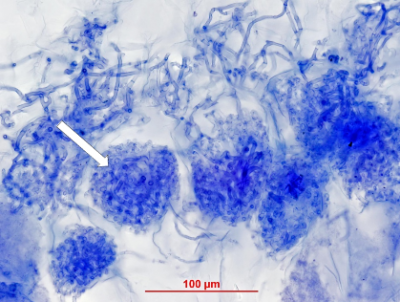 Ericoid mycorrhizal fungi (largely ascomycetes) form an interface within cells, consisting of dense hyphal coils which are surrounded by host plasma membrane which is similar to orchid mycorrhizas (Figure 4.30). Many members of the Ericaceae host these associations in very fine lateral roots called hair roots, which are only a few cells wide (Figure 4.30). 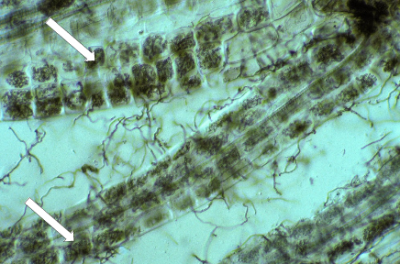