Yield of a cereal crop such as wheat or rice depends on the numbers of seeds that mature on a plant, and their size. Carbon partitioning during vegetative development and before flowering influences the number of flowers that are formed on a plant, as the reproductive sink competes with growing tissue in leaves, stems and roots for carbon supply. Carbon partitioning after flowering influences the rate of seed growth and the final size of the seed.

Major sources of variation in yield can be identified via a simple yield component model. Taking cereals as an example, final grain yield (g m–2) is a product of grains per square metre and mass per grain.

Planting density and fertilizer can further influence yield components, as shown in the example in Table 6.5. In cereals, lateral shoots are called “tillers”, and the mature inflorescence that forms on a mature tiller an “ear”. Ears m–2 is in turn an outcome of planting density (plants m–2), tillers per plant and ears per tiller. Not all tillers produce an ear, especially if the density is high and the plants then limited by light as well as possibly by fertilizer or water. 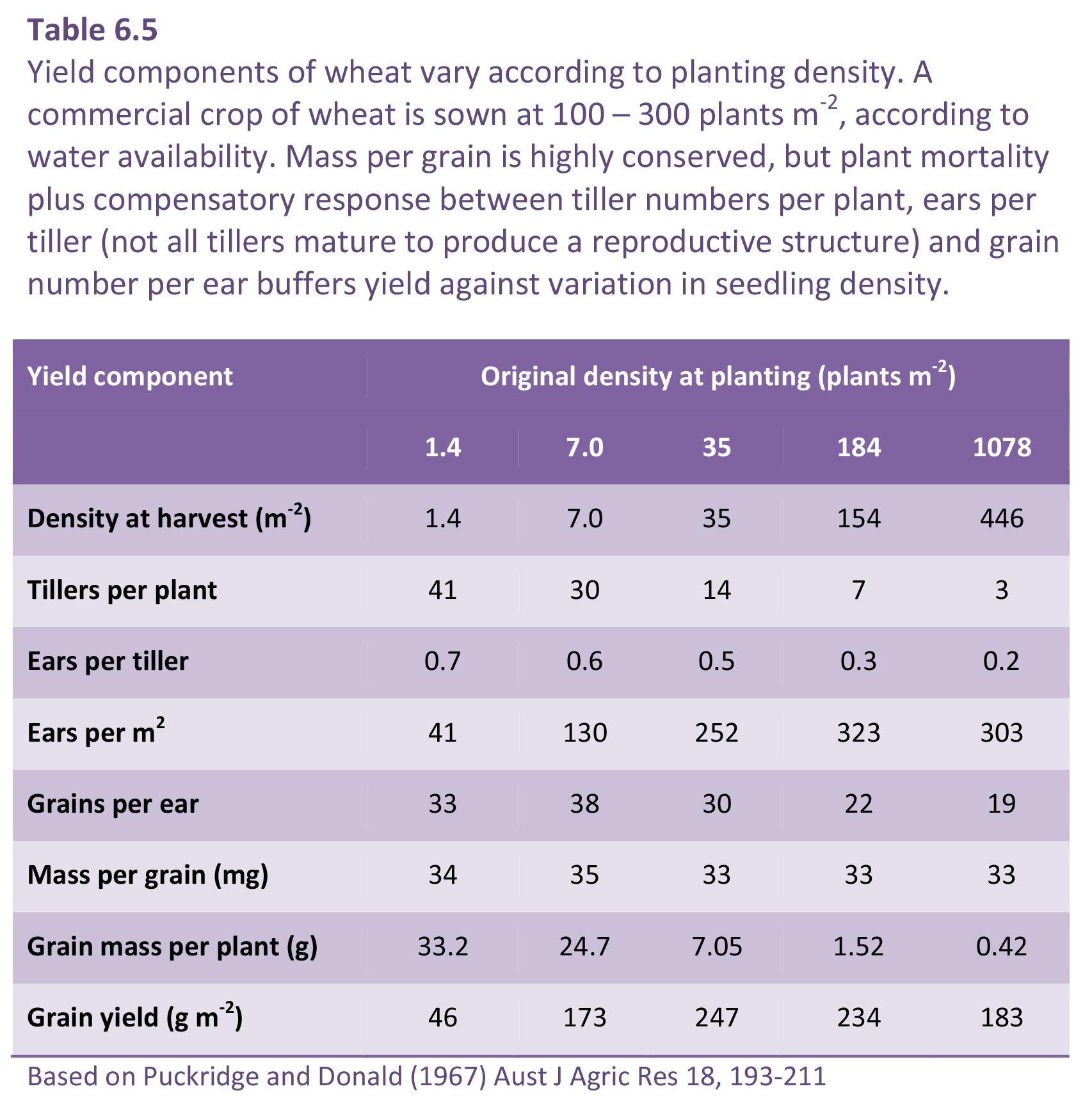 Some yield components such as mass per grain are especially stable, others such as ears m–2 and grains per ear vary widely with seasonal conditions or according to original planting density (Table 6.5). In that case (Insignia wheat at Glen Osmond, South Australia), mass per grain was highly conserved (33–35 mg) whereas tillers per plant varied from 41 at lowest planting density to only three at highest density. Significantly, yield variation was buffered by compensatory responses in yield components. For example, effects of low planting density were offset by production of more tillers per plant and more ears per tiller. Grains per ear then determine potential yield so that growing conditions would have become crucial for realising such potential via grain retention and filling

Genotype × environment interactions lead to huge variation in cereal grain yield and have been exploited for yield improvement. Universally, high grain number per square metre is a prerequisite for high yield and can be achieved via more ears per square metre and/or more grains per ear. In wheat and barley, grain number per ear has been primarily responsible for gains in yield; ears m–2 and mass per grain have not shown consistent increase (see Evans 1993 and literature cited).

For a commercial crop, mass per grain is the most important single component, and determines its use. The size (and sometimes shape) of the harvested product determines the value of the crop to the grower. A small or “pinched” wheat grain is of little value as it cannot be milled for flour and is fed to animals.