Wood formation (xylogenesis) comprises cell division, cell expansion, secondary cell wall deposition, lignification and finally programmed cell death, which occur in highly coordinated and defined ways in response to the environmental conditions imposed on the plant. In mature tree stems, fusiform cambial initials give rise to fibres, tracheids and vessel cells (only tracheids are formed in conifers) while ray cell initials give rise to ray parenchyma cells which, combined, form the ray system. Following division, but prior to the commencement of secondary cell wall deposition, the immediate xylogenic derivatives of fusiform cambial initials (i.e. xylem mother cells) undergo cellular expansion to reach their final form. The extent of this turgor driven expansion is regulated by a range of enzymes that assist in the association and disassociation of primary cell wall components including pectin, randomly aligned cellulose microfibrils (MF) and other non-cellulosic polysaccharides.

The beginning of secondary cell wall formation marks the end of cellular expansion with the production of new cell wall layers leading to cell wall thickening. This stage is characterised by the deposition of large amounts of aligned cellulose microfibrils to the inside of the primary wall in three layers, S1, S2, S3. These differ in their thickness and cellulose MF alignment, and also by the development of cell wall pits. The S2 layer is the most dominant of these layers, accounting for approximately 75-85% of the cellulose content in the secondary cell wall, and as far as wood properties are concerned, has the largest influence. For example ‘Microfibril Angle’ (MFA), one of the most important complex wood quality traits, refers specifically to the cellulose microfibril orientation in this layer of the fibre (or tracheid) cell wall. MFA is known to influence the stiffness and elasticity of individual cells as well as wood and wood products. During this process, the cell wall lignifies and finally undergoes programmed cell death (PCD) during which all cellular content is lost through the action of proteolytic enzymes.

In many tree species, a final developmental process, heartwood formation, occurs later during development. With progressing age, and with the continuous differentiation of some fusiform cambial initials into new vessels, older vessels towards the center of angiosperm tree stems no longer transport water and nutrients and the actively conducting sapwood develops into heartwood. The only cells that are still alive in the sapwood/heartwood transition zone are ray parenchyma cells. Here, they are believed to undergo programmed cell death, translocating polyphenolic substances into surrounding cell walls, leading to the discoloration of heartwood. Where ray cells of some angiosperm trees are directly associated with larger vessels, as a final developmental process, they can produce tylose plugs, decreasing wood permeability and preventing microorganisms from entering the center of the stem. A similar process occurs in sapwood in response to wounding in order to avoid embolism (Figure 7.20). 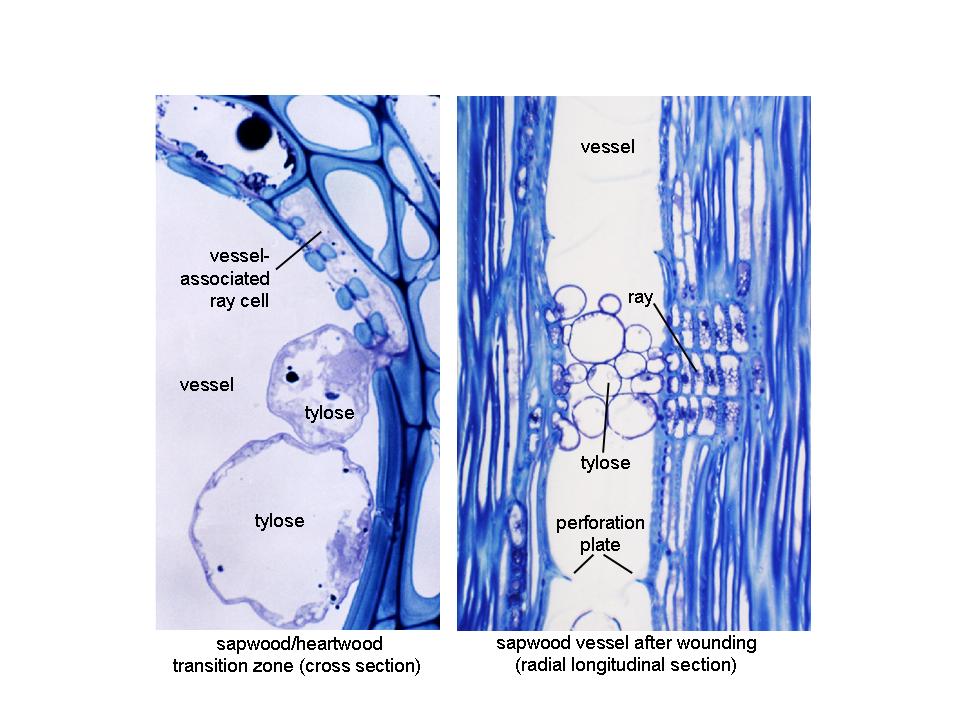 Figure 7.20 Tylose formation in mature Eucalyptus nitens stems (photos and microscopy by Dr Lawrie Wilson). Left: In the sapwood/heartwood transition zone, tylose plugs are formed by vessel-associated ray parenchyma cells, growing through pit pairs into the vessel lumen, eventually blocking them off from the transpiration stream. Right: Tylose plugs can also form in sapwood vessels in response to wounding. Here, disconnection of an affected vessel from the transpiration stream prevents air from entering the system and cause embolism.

The deposition of lignified secondary cell walls marks the end of cellular expansion and is central to the process of xylogenesis and ultimately determines the functional properties of wood. Secondary cell walls consist of cellulose, lignin and other non-cellulosic polysaccharides which typically represent 90% of the wood dry weight and provide support for the cell. Other minor yet important contributions to cell wall structure and function are made by cell wall proteins and other compounds. Quantitative and qualitative changes in the composition of these elements can lead to changes in cell wall properties and are responsible for the large variation in wood properties observed within and between tree species.

Throughout the year, the cambium undergoes cyclic or induced dormancy and activity periods and wood properties show high levels of variability in response to seasonal, developmental, genetic and abiotic processes. In temperate regions, typically in the northern hemisphere, the vascular cambium undergoes seasonal or periodic dormancy in response to unfavorable and/or detrimental environmental conditions. This dormancy period is usually triggered by a decrease in photoperiod, temperature and water availability during the autumn months preparing the plant for adverse winter conditions and in deciduous plants is closely linked with leaf shed. Prior to the onset of dormancy as conditions begin to decline, cambial activity as well as the number of dividing cells is reduced and cell wall thickness in fusiform initial derivatives in the differentiation zone increases. These seasonal differences in the formation of woody tissues enable the distinction between earlywood (larger cell lumen and thinner cell walls) and latewood (smaller cell lumen, thicker cell walls) leading to the creation of growth rings. Ray initial derivatives on the other hand do not undergo such strong seasonal changes in morphology but their number in the cambial zone decreases during dormancy. Changes in wood properties are also observed between wood produced from early stem growth, juvenile wood, and wood produced later from an older cambium, mature wood. Abiotic stress can lead to reaction wood formation (for example in response to non-vertical growth; referred to as tension wood in angiosperms and compression wood in gymnosperms) displaying altered secondary cell wall characteristics and wood properties to ‘normal’ wood in an attempt by new cambial growth to realign the stem back to a vertical position.