A vascular plant begins its existence as a single cell, the zygote. The early embryo derived from growth of a zygote is globular whereas a mature embryo has a deﬁned apical–basal growth axis (Figure 7.1). In other words, it has become a polar structure.

During longitudinal axis formation, two distinct zones that subsequently retain the capacity for continuous growth are set apart at opposite poles. These regions are the apical meristems, one producing the shoot system, the other producing the root system (Figure 7.1c). These are ‘open-ended’ indeterminate growth systems from which the same kinds of organs and/or tissues are produced continuously and which result in the primary plant body. Often in response to environmental cues such as photoperiod and low temperature, the shoot apical meristem may undergo transition to a floral state. In this case, the meristem has become determinate and ceases to produce new organs. In contrast, most root meristems remain indeterminate, although lateral roots which branch off a primary axis can become determinate. Shoot buds containing meristematic cells give rise both to terminal apices and to lateral branches, for example the crown of a eucalypt and its side branches, respectively. Roots also branch profusely, but from meristematic tissue deep within the root axis, so generating extensive root systems typical of most land plants. In monocots, an intercalary meristem located at each node of the stem provides the facility for continued longitudinal growth if the shoot tip is destroyed, for example by a grazing animal or a lawnmower. Patterns of plant development contrast sharply with those of higher animals where the fundamental body plan, complete with rudimentary organs, is laid down in the embryo. In the case of animals the organ number is ﬁnite, unlike the plant body in which an indeﬁnite number of organs such as leaves are produced from indeterminate apical meristems. Within the organs of an animal, further cell divisions replace degenerating cells whereas plant cell division primarily provides new organs to replace those lost through senescence.

The so-called primary plant body, described above, may constitute a whole plant, for example annuals like pea, cereals and Arabidopsis. However, plants with extended lifespans have additional meristem layers called cambium which develop within roots and stems, and lead to an increase in girth along the plant’s longitudinal axis (see Section 7.2). Vascular cambium generates extra conducting tissue; cork cambium produces protective tissue, replacing the functions of epidermis in stems, and cortex and epidermis in roots. Cambial meristems and their derivative tissues are referred to as the secondary plant body. Although no new organs are produced by these lateral meristems, the secondary plant body may constitute the bulk of the plant, for example a tree’s trunk, branches and roots. 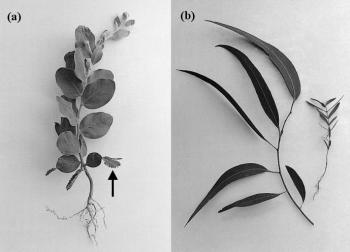 Localised meristems, whether axial or lateral, have profound implications for morphogenesis. Changes in the fate of cells emerging from meristems will be evident in the resultant tissues and organs. For example, the abrupt transition from juvenile to mature leaves in eucalypts and acacias (Figure 7.2) reflects this change of fate.
Meristems are restricted to localised regions in higher plants, but in algae cell divisions are not always organised this way. Unicellular organisms undergo divisions to produce a new biological entity capable of further cell divisions and multicellular algae often have diffuse meristems. The latter could in part reflect the less exacting demands of their homogeneous aquatic environment. Producing new cells throughout a developing thallus may be feasible simply because it is well supported under water.