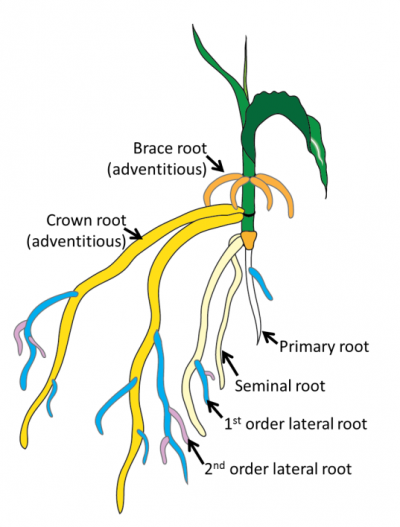 Primary root: the first root to emerge from a germinating seed (starts as the radicle). Since the primary root is present within the embryo, this class of root is embryonic.

Seminal roots: form adjacent to the radicle and dominate the early root growth in monocots. This root type is embryonic.

Adventitious roots: any root that forms from anything other than another root. This includes roots that form on the base of stem cuttings, from leaf explants, from stems in flooded plants and also from nodes of cereal crops (often called crown roots). These root types are very diverse (Steffens and Rasmussen, 2015) so can include both embryonic and post-embryonic roots. 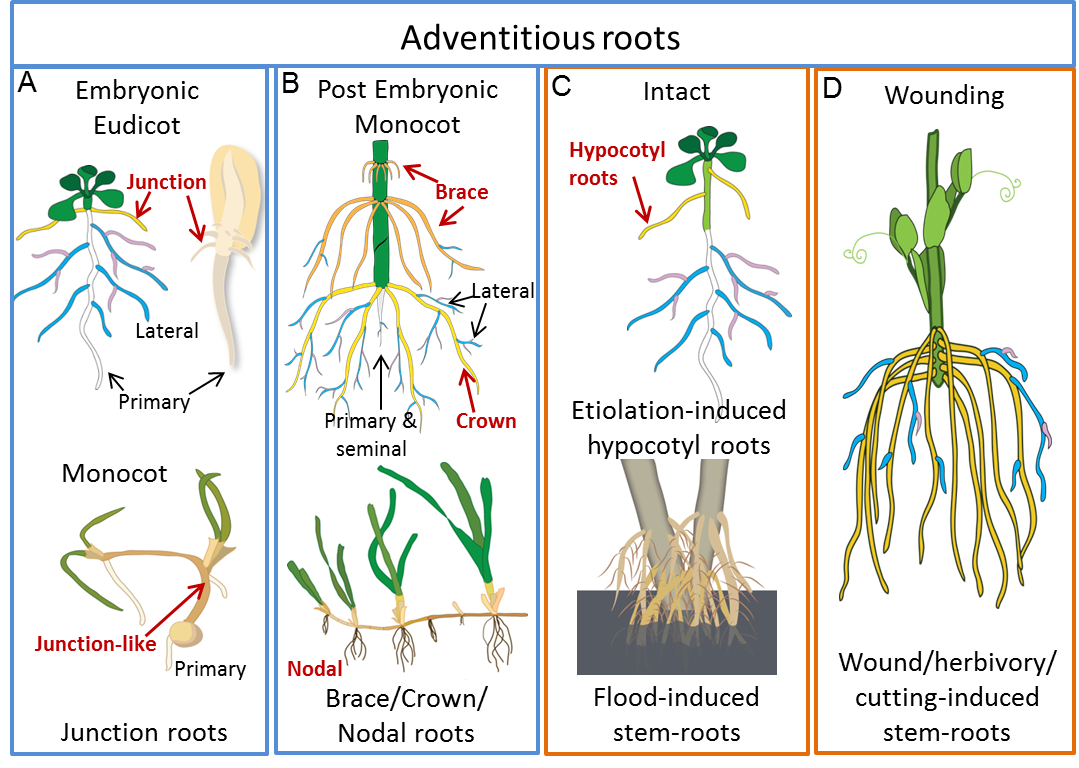 Root hairs: single-cell, hair-like extrusions from the epidermis which increase root surface area for nutrient uptake (Jones and Dolan, 2012) and are important for nodulation (Section 4.4). 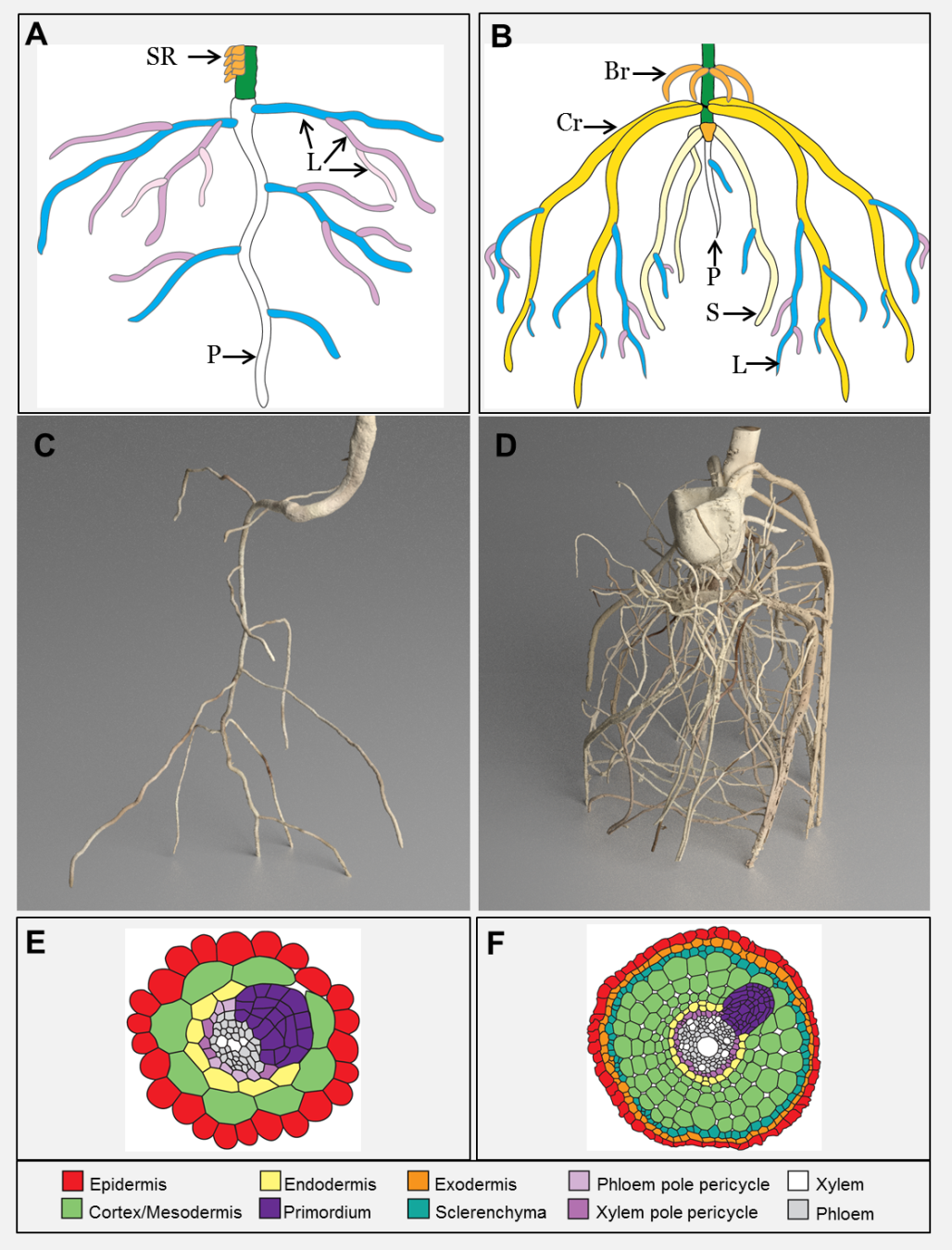 Eudicots typically develop a primary (tap) root from a single radicle that emerges from a seed. This primary root, plus the first order lateral roots which emerge from it, provide a framework on which higher-order lateral roots are formed. Such a framework strengthens due to secondary thickening when division of the cambium gives rise to more cell layers, leading to massive roots that are often seen radiating from the base of a tree trunk (Figure 4.9).

Monocots such as grasses and cereal crops do not have a cambium for secondary thickening and develop a ﬁbrous root system. This root system begins with the radicle which grows into the primary root. Adjacent to the radicle, several seminal roots also emerge and combined with the primary root these roots dominate the young root systems of monocots. Next nodal adventitious roots (often called crown roots) emerge from lower stem nodes and these thicker roots gradually dominate the root system. Finally in some monocots, such as maize (corn), nodal adventitious roots emerge above the soil level (brace roots) to provide additional structural support. Stems of monocots are typically anchored by the nodal roots, which are more numerous than seminal roots (Hochholdinger et al. 2004; Hochholdinger 2009).

Despite these structural differences between monocot and eudicot root systems, they can all vary the soil volume which they explore depending on water and nutrient availability. In this way the root distribution in the soil can vary both vertically and locally depending on available resources. 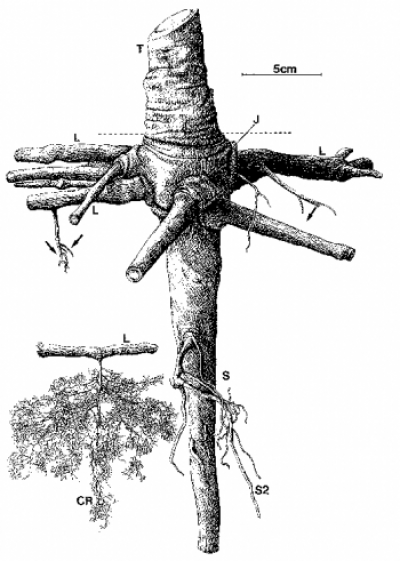 Figure 4.9 Dimorphic root system of a six-year-old Banksia prionotes tree growing in Western Australia in a deep sand. The trunk (T) is connected through a swollen junction (J) to the root system which comprises a dominant sinker root (S) with smaller sinkers (S2). A system of lateral roots (L) emerge horizontally from the junction, some bearing smaller sinker roots (arrows). Other laterals give rise to cluster roots (CR). (W.D. Jeschke and J.S. Pate, J Exp Bot 46: 907-915, 1995)

The amount of roots present in a volume of soil varies both vertically and locally depending on resource availability and physical restrictions. This is often measured as the total length of all roots present per unit volume of soil (root length density, L, expressed in km m–3). 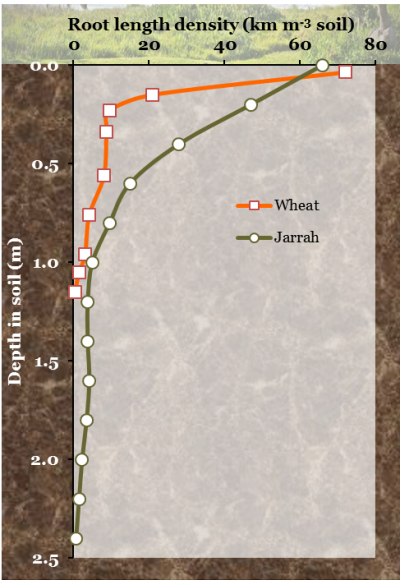 Vertically, the root length density is often large in surface layers of the soil and typically decreases with increasing depth. Commonly, hundreds of kilometres of root per cubic metre of soil are observed near the soil surface.

Figure 4.10 shows root length density, L, as a function of depth in a wheat crop in early spring, and under a jarrah forest, also in spring. Both have a dense population of roots near the surface but wheat roots barely penetrate below 1 m, whereas jarrah roots penetrate to well below the 2.5 m shown here, often to 20 m. Dense root proliferation near the soil surface probably reflects an adaptation of plants to acquire phosphorus, potassium and other cations such as the micronutrients zinc and copper. These nutrients do not move readily in soil as they are bound to the soil surfaces, hence roots branch proliﬁcally to ensure close proximity (a few millimetres) between adsorbing surfaces and these soil-immobile ions. Roots of jarrah are also concentrated near the soil surface (Figure 4.10) to access phosphate and nutrients released by litter decomposition, but some roots penetrate very deeply to tap subsoil moisture.

Nutrients are distributed unevenly in the soil. Root systems respond to enriched zones of nutrients by high levels of branching. Figure 4.11 shows an example of such a proliferation; the dense roots in the centre of the ﬁgure are a response by the row of wheat plants to application of a large pellet of nitrogen fertiliser (see arrow). 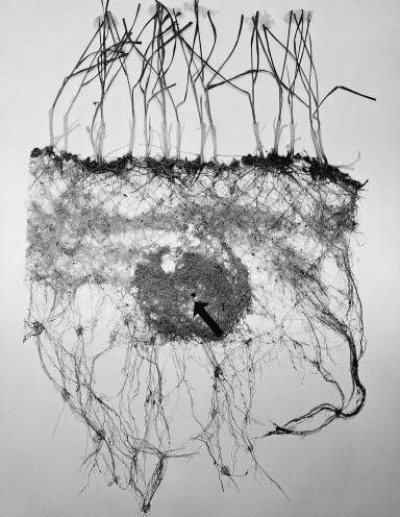 Figure 4.11 Excavated root system of wheat plants whose roots were provided with a concentrated band of ammonium sulphate fertiliser at the head of the arrow. (Photograph courtesy J.B. Passioura)

Such proliferations around bands of fertilizer ensure plants maximise nutrient uptake with the minimum cost to plant development. This efficiency fits within optimal partitioning theory which states that plants respond to environmental variation by partitioning biomass among the plant organs to optimize the acquisition of nutrients, light, water and carbon to maximize plant growth (Reich, 2002). This means that in low nutrient conditions the plants will put more energy into growing roots and less into shoot growth (Reich, 2002). Likewise when light is limiting, plants will invest more energy in leaf area and less in root development (Weaver and Himmel, 1929; Reich, 2002). Maintaining the balance between root and shoot is important as the roots must be extensive enough to supply nutrients and water in proportion to the demand and hydraulic pull from the leaves and vice versa the leaves must produce enough sugars to continue the growth of the root system (Weaver and Himmel, 1929). Consistent with this, Butler et al. (2010) found in Sitka spruce forest, the root absorbing area was correlated with the tree stem diameter and to the transpiring leaf area index. This highlights the link in hydraulics between leaf and root areas.

Young roots absorb nutrients more rapidly than old roots. New roots supply annual plants with abundant sites for nutrient uptake, especially during establishment. A feature of the roots of perennials is that they have a large turnover of the ﬁne, high-order lateral roots that emerge from the secondarily thickened framework each year. This turnover draws heavily on photoassimilate, equivalent to half the CO2 fixed in annuals and up to 90% of the standing biomass of temperate forests. Production of ﬁne (and often ephemeral) roots ensures uptake of nutrients over many years.

Because many soils are deficient in key nutrients, plants have developed a special relationship with certain fungi called mycorrhizae (Section 4.4). In this symbiosis the fungi obtain ﬁxed carbon from the host plant, and in turn supply the host with poorly mobile nutrients, especially phosphorus. This is achieved by proliferating their hyphae to provide a much greater surface area for nutrient uptake than could be provided by roots alone. Another adaptation, common in the Proteaceae, and also occurring in some species of lupin, is proteoid roots, clusters of tiny rootlets that greatly enlarge the available surface area for ion uptake and which are inducible by low levels of phosphorus (see Case study 4.1).