When plants are completely submerged and in darkness, so that no photosynthesis occurs, O2 can become exhausted by respiration resulting in tissue anoxia, especially in tissues/organs buried in anoxic soil. Prolonged anoxia is tolerated by rhizomes, tubers and some shoot organs of wetland species, and by germinating seeds of rice and some paddy weeds (e.g. barnyard grass). More commonly, anoxia can occur in portions of the plant body (e.g. roots), or parts of tissues within roots. ‘Anoxic cores’, coexistence of an anoxic stele and aerobic cortex, were demonstrated for maize roots in hypoxic conditions, using O2-microelectrodes (Figure 18.5) and biochemical indicators of fermentative metabolism (Thomson and Greenway 1991). 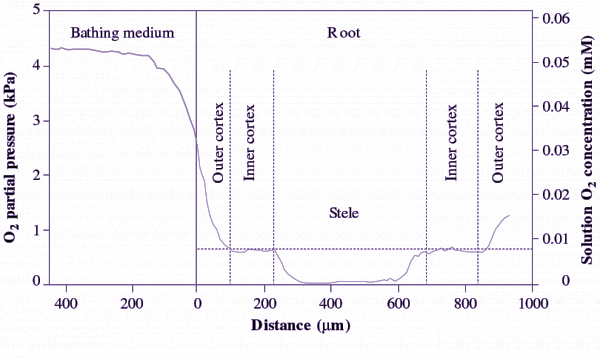 Figure 18.5. O2 concentration (mM) measured across a maize seedling root by using an O2-microelectrode. The profile was taken radially through differentiated tissues 75 mm behind the apex of a 135 mm long root. O2 concentration in the bathing medium was about 0.05 mM (hypoxia), so that the cortex received O2 whereas the stele had an ‘anoxic core’. The abrupt gradient in O2 status results from the lower porosity and higher metabolic demand in steal tissue as compared with the cortex. (Profile reproduced from Gibbs et al., 1988 with courtesy of W. Armstrong).

Roots in drained soil respire by catabolising carbohydrates in the tricarboxylic acid (TCA) cycle, with the ‘reducing power’ produced used in the electron transport chain (ETC) with O2 as the terminal electron acceptor. Energy in the form of ATP is generated, predominantly through oxidative phosphorylation in mitochondria (Chapter 2.4). However, in waterlogged soils O2 is scarce or even absent and therefore respiration is inhibited. Carbohydrates are then broken down via fermentative pathways to yield at least some ATP, produced during substrate-level phosphorylation in glycolysis (Figure 18.6). Conversion of the pyruvate to an end-product, such as ethanol, is essential to remove this metabolite as well as to recycle the NADH to NAD+, so that the pathway can continue to flow. Breakdown of carbohydrates to ethanol and CO2 is the principal fermentative pathway in plants. Some lactate and alanine are also produced, but in contrast to fermentation leading to lactate and alanine, ethanolic fermentation can be sustained over days in anoxic tissues, end-product feedback or even toxicity being minimised by leakage of ethanol and CO2 to the environment. 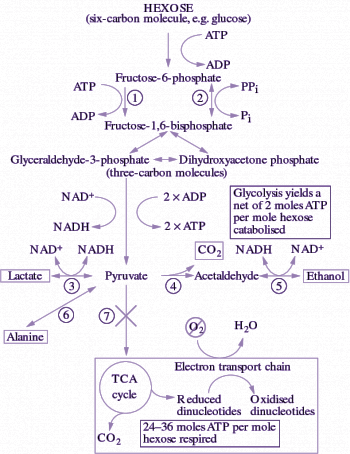 Figure 18.7. Curves showing pH optima of enzymes at the branch point for carbon flow to aerobic and anaerobic pathways. These in vitro determinations from extracts of rice coleoptiles indicate how cytoplasmic pH controls carbon flow. In aerobic conditions, pyruvate dehydrogenase (PDH) catalyses entry of pyruvate to the TCA cycle when pH is above 7. Anoxia results in a decline in cytoplasmic pH to below 7, causing PDH activity to give way to pyruvate decarboxylase (PDC) and fermentation to commence (i.e. PDC becomes engaged at pH below 7, whereas PDH ceases to function). In addition, PDC extracted from coleoptiles of rice seedlings previously exposed to anoxia is in a more active state, enhancing pyruvate consumption for ethanol production. Based on Morrell et al. (1989).

Carbon flow from pyruvate to ethanol (with CO2 also produced) occurs via the fermentative enzymes pyruvate decarboxylase (PDC) and alcohol dehydrogenase (ADH) (Figure 18.6). This flow is probably regulated by the activity of PDC which catalyses the first step of ethanolic fermentation. In wheat roots, for example, the PDC in vitro activity approximates the measured in vivo rate of ethanol production. Increases in the amounts of PDC and ADH proteins have been observed in a range of plant genotypes and tissues in response to O2 deprivation. Indeed, these enzymes form part of a suite of ‘anaerobic proteins’, enzymes synthesised during anoxia. In addition to increased protein abundance, post-translational regulation of PDC activity is also exerted by changes in cytoplasmic pH, which decreases from around 7.5 in aerobic cells to around 6.8–7.2 in anoxic cells. Below pH 7.2, the activity of PDC reaches its optimum. For example, PDC extracted from anoxic rice coleoptiles becomes very active as pH drops below 7 according to the broad pH response curve in Figure 18.7. Following a return to aerobic conditions, cytoplasmic pH increases back to its normal level, the activity of PDC decreases, and carbon then flows again via pyruvate dehydrogenase (PDH) to the TCA cycle, rather than via PDC for fermentation to ethanol.

During anoxia, normal protein synthesis is replaced by the selective transcription and translation of a set of proteins called ‘anaerobic proteins’. In maize roots, there are 20–22 of these proteins which include fermentative enzymes (e.g. PDC and ADH), enzymes involved in anaerobic carbohydrate catabolism (e.g. sucrose synthase and enzymes responsible for the reversible breakdown of sucrose) and several glycolytic enzymes (e.g. aldolase). Other ‘anaerobic proteins’ of maize include superoxide dismutase (SOD), responsible for scavenging O2-free radicals. ‘Anaerobic proteins’ are also formed in rice embryos, with a suit of proteins similar to those described for maize but also others - one very interesting additional ‘anaerobic protein’ in rice is the tonoplast H+-pyrophosphatase (Carystinos et al. 1995). By maintaining an ‘energised’ tonoplast capable of ion and solute transport, this enzyme might help stabilise cytoplasmic pH. Use of pyrophosphate (PPi) as an energy source reduces the dependence of tonoplast ion transport on ATP regeneration to drive the H+-ATPase. Studies using knockout mutants in rice have further demonstrated the importance of the H+-pyrophosphatase for anoxia tolerance (see Case Study 2).

Root tissues can acclimate to low O2 with improved anoxia tolerance, if exposed to hypoxia (low, but not zero O2) prior to the onset of anoxia. As examples, roots of maize and wheat survive anoxia more than three times longer if exposed first to hypoxia rather than abrupt transfer from aerated solution into anoxia (Table 18.4). The elimination of ADH activity reduced the survival of maize Adh- 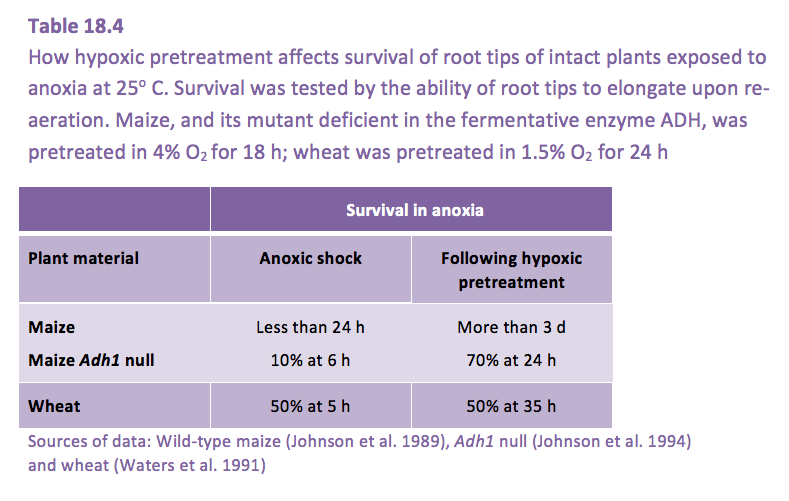 Metabolic acclimation set in train by hypoxia included changes in gene expression and therefore the protein complement (‘proteome’) in cells. Hypoxic pretreatment raised activities of the fermentative enzymes PDC and ADH, and resulted in a faster rate of ethanolic fermentation during the subsequent anoxia. How plants sense and initiate signal cascades to invoke these metabolic acclimations is a current topic of debate and could involve sensing of changes in cellular energy charge, cytosolic pH, and/or possibly oxygen (see Case Study 18.3) or other possibilities.

The changes in fermentative enzymes, together with observations that exogenous sugars prolong tissue survival during anoxia, point to carbohydrate catabolism as an important factor in tolerance to anoxia. Even with fermentation operational, however, the anoxic root cells still face an ‘energy crisis’, as the ATP generated via fermentation is often insufficient even for cell maintenance in some species. Compared with respiration, fermentation produces 85–95% less ATP per hexose unit consumed. So, although such anaerobic energy generation is vital, a rapid rate of fermentation alone does not endow anoxia tolerance. Pea root tips, for example, ferment 45% faster than maize root tips, but survive less than half as long in anoxia. Greenway and Gibbs (2003) have highlighted that in addition to fermentation, other more subtle aspects of energy consumption must also be involved in anoxia tolerance, such as a reduction of energy requirements for cell maintenance and the redirection of energy flow to essential cellular processes, including maintenance of membrane integrity, regulation of cytoplasmic pH, and synthesis of appropriate ‘anaerobic proteins’.

The key to anoxia tolerance therefore lies in integration of energy production via anaerobic carbohydrate catabolism and energy consumption in reactions essential for survival. Accumulating evidence suggests two modes of tolerance based on slow and rapid rates of fermentation (Greenway and Gibbs, 2003). As one example of the ‘slow fermentation mode’, lettuce seeds appear to survive anoxia by slowing carbohydrate catabolism in anoxia to less than 35% of the rate in air. After 14 d without O2, lettuce seeds germinate normally (Raymond and Pradet, 1980). Other plant tissues which survive but do not grow in anoxia, produce an initial burst of fermentative activity over 6–24 h before settling to slower fermentation rates. This two-phase pattern presumably provides the higher ATP required as cells acclimate to anoxia, but then the lower rates of fermentation would conserve carbohydrates for long-term survival. To be of adaptive value, this conservation of substrates through slower catabolism must be compatible with the smaller ATP yield available for cell maintenance. Calculations show that, for example, non-growing beetroot tissue in anoxia used 10- to 25-fold less ATP for cell maintenance than aerobic tissues (Zhang and Greenway, 1994).

The coleoptile of rice provides an example of the ‘fast fermentation mode’, this organ grows in anoxia (a second example is the stem of Potamogeton spp.). Fast fermentation is sustained by accelerated glycolysis, a phenomenon known as the ‘Pasteur Effect’. However, even in rice, glycolytic rate is only about twice as fast in anoxia as in air (Table 18.5). 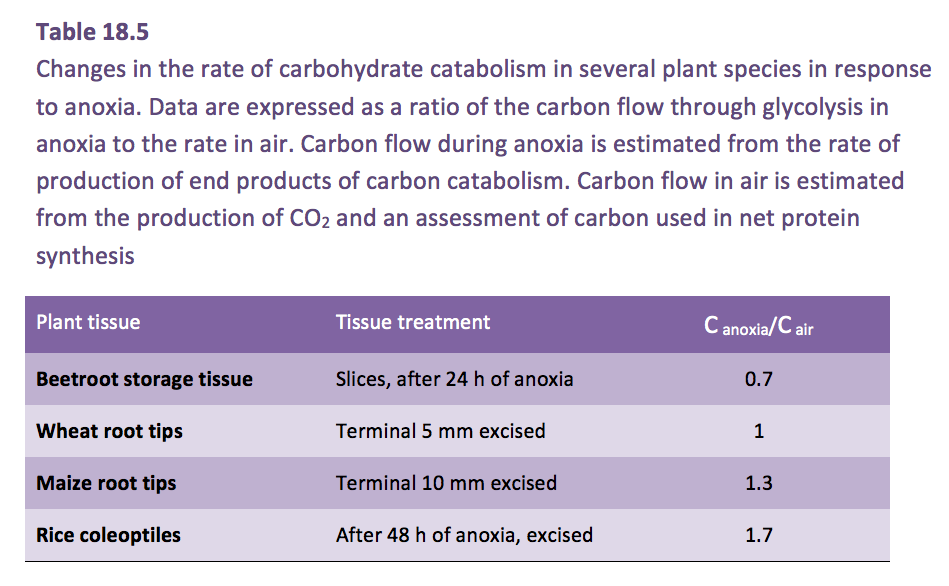 The glycolytic enzyme ATP-dependent phosphofructokinase (PFK), might in addition to PDC, contribute to control of glycolysis (Figure 18.6) and thus fermentation in the coleoptile of rice. Starch breakdown and sugar transport from the endosperm to coleoptile of rice seedlings in anoxia fuels the ethanolic fermentation. For plants without such starch reserves, however, low carbohydrate levels would limit the rate of anaerobic carbohydrate catabolism in tissues that experience anoxia.

‹ Case Study 18.2: Rice coleoptiles - an excellent model for studies on oxygen deprivation up Case Study 18.3 - Can plants sense oxygen? ›
Back to top