Plant life relies on light-energy driven fixation of CO2 into carbohydrates through photosynthesis. These carbohydrates are subsequently used to construct various plant structures and fuel energy production through respiration in non-photosynthetic tissues and even in photosynthetic cells during dark periods. Respiration requires a sufficient supply of O2. Cells in various organs of submerged terrestrial plants typically suffer from severe shortage of O2 and thus energy deficits. The extremely slow diffusion rate of O2 through water to plant organs and cells means that O2 supply becomes limiting for respiration. Low O2 conditions during flooding most frequently occur in root tissues as these are surrounded by a soil environment characterized by very low O2 levels and because of the absence of photosynthetic capacity to generate O2. Upon low O2 conditions metabolism shifts from efficient mitochondrial ATP production (O2 dependent) to inefficient anaerobic substrate-level production of ATP (glycolysis linked to fermentation), as long as sugar substrates are available. Further adjustments involve restrictions in ATP consumption and translational activities so that general protein turnover slows to save energy.

Reliable sensing of O2 levels would allow rapid acclimation to declining O2 in flooded plants. It was shown recently that O2 sensing is achieved by a mechanism in which the N-end rule pathway of protein degradation serves to regulate the low O2 response in plants (Gibbs et al. 2011; Licausi et al. 2011). Up to now the unraveling of the O2 sensing machinery was one of the biggest challenges in flooding research. The identification of such a mechanism sheds light on the earliest step in the signaling pathway leading to low O2 acclimation (Figure 1).

Many genes that are typically associated with low O2 conditions in plants are regulated by transcription factors belonging to the so-called group VII Ethylene Response Factors (ERFs). Typical for these ERFs in Arabidopsis (5 members) is that they possess a specific N-terminal motif (N-degron). Due to this motif these proteins are post-translationally modified in an O2-dependent manner via the N-end rule pathway of protein degradation. The N-terminal of Arabidopsis group VII ERFs is composed of a methionine followed by a cysteine as the second residue. The constitutive activity of methionine amino peptidase cleaves these ERF proteins between the methionine and the cysteine, yielding an N-terminal exposed cysteine. In this conformation the cysteine can be oxidized in an O2-dependent manner. Under normoxic conditions, cysteine is oxidized and an arginine residue is added to the cysteine, catalyzed by an arginyl tRNA transferase (ATE). In this form the ERF protein can be recognized by the E3 ligase PROTEOLYSIS 6 (PRT6), leading to ubiquitination and 26S proteosome-mediated degradation. However, when O2 is limited (hypoxia or anoxia) as in many organs of flooded plants, degradation of ERFs is inhibited as a consequence of a lack of cysteine oxidation. Under these conditions stable ERFs can function as transcription factors and drive transcription of genes needed in plants to survive in low-O2 environments. As soon as the plant is re-oxygenated (e.g. upon withdrawal of flood water) the ERFs are again destabilized and the transcription of hypoxia-induced genes is halted.

At least one Arabidopsis ERF, RAP2.12, is sequestered at the plasma membrane, mediated by an interaction with the membrane-bound Acyl CoA binding proteins 1 and 2 (ACBP1/2). This sequestration of RAP2.12 is functional to prevent degradation by the N-end rule pathway under normoxic conditions. Via docking to ACBP1/2, high levels of RAP2.12 can be maintained even under normoxic conditions, without the risk of being degraded. Upon hypoxia RAP2.12 translocates rapidly to the nucleus to switch on acclimative pathways for low O2 conditions (Figure 1). 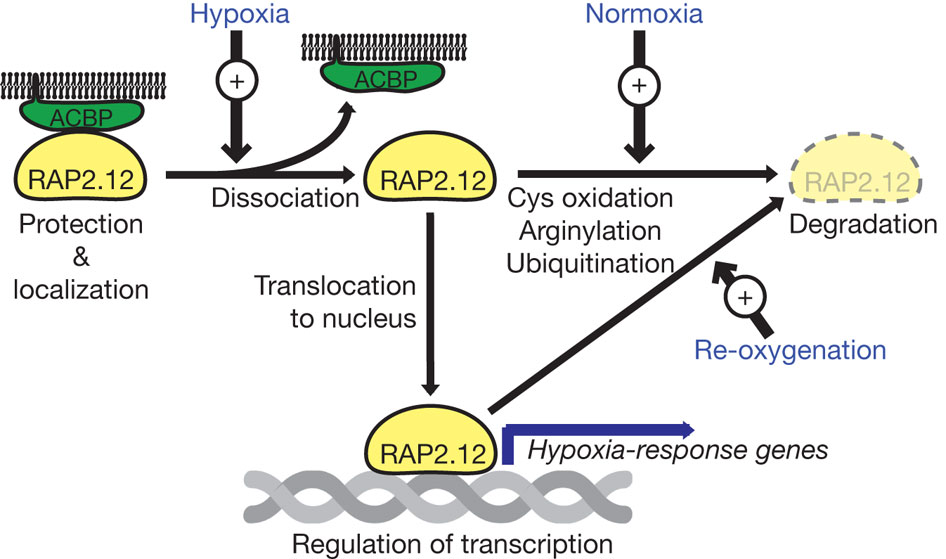 Figure 1. A model describing O2-sensing in plants. Under normoxic conditions the ERF protein RAP2.12 has a protected plasma membrane localization due to its interaction with Acyl CoA binding proteins (ACBPs). Upon hypoxia RAP2.12 and ACBP dissociate and RAP2.12 moves to the nucleus where it induces transcription of adaptive hypoxia-response genes. Upon re-oxygenation RAP2.12 is rapidly degraded via the N-end rule pathway to down regulate the hypoxia response (Licausi et al. 2011).