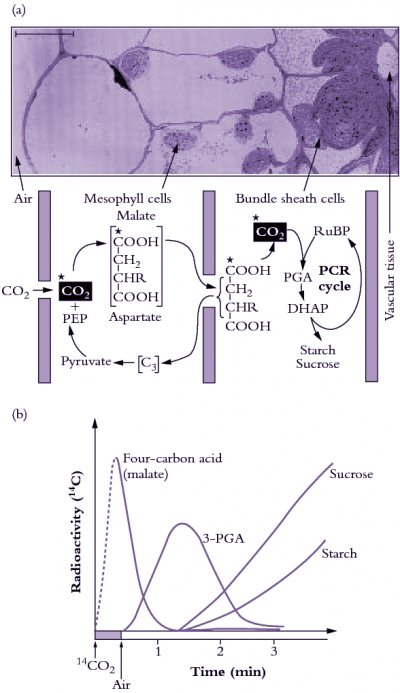 Figure 2.3. C4 photosynthesis is an evolutionary development where specialised mesophyll cells initially fix CO2 from the air into 4-carbon acids which are transported to the site of the PCR cycle in the bundle sheath. The bundle sheath cells are relatively impermeable to CO2, so that when the CO2 is released here from the 4-carbon acids, it builds up to high levels. The C4 photosynthetic mechanism is a biochemical CO2 pump. The pathway shown here is overlayed on a micrograph of a C4 leaf, showing bundle sheath and mesophyll cells. Rubisco and the other PCR enzymes are in the bundle sheath cells while phosphoenolpyruvate (PEP) carboxylase is part of the CO2 pump in the mesophyll cells. In C4 plants, after radioactive labelling, 14C appears first in a 4-carbon acid, rather than in 3-PGA. Scale bar = 10 µm. (Original drawings courtesy M.D. Hatch).

One hundred million years ago (Mid-Cretaceous), atmospheric CO2 was between 1500 and 3000 µL L–1, or four to ten times post-industrial levels. Atmospheric CO2 declined during the Oligocene (20-30 million years ago) from the high Tertiary levels (>1000 µL L-1), and oscillated between 180 and 300 µL L-1 for the last 1-3 million years. The Oligocene was also a time when the Earth was dry and the tropics were relatively hot. The earliest origins of C4 photosynthesis date back to this period. Curiously, C4 plants remained in low abundance for a long period of time. According to stable carbon isotopic data, a worldwide expansion of C4 grasslands and savannas occurred during the Late Miocene and Pliocene (3 to 8 million years ago), most probably through the displacement of C3 vegetation (Edwards et al. 2010).

Angiosperms have a higher relative specificity of Rubisco for CO2 than ferns and mosses (see examples of other less evolutionarily advanced species in Figure 2.3). Such differences imply minor evolution in this highly conserved molecule of Rubisco and there is little variation between species of vascular plants. Consequently, alteration of Rubisco in response to a changing atmospheric CO2 concentration has not been an option.

By contrast, evolution of a new photosynthetic pathway (C4) has occurred independently and on many occasions in diverse taxa over 25 to 30 million years as CO2 levels declined. Despite its complexity, C4 photosynthesis evolved more than 60 independent times in 19 distantly related flowering families. About 50% of C4 species are grasses (Poaceae) with ~18 distinct origins distributed over 370 genera and ~4600 species (Sage et al. 2011). The oldest identifiable fossils with pronounced bundle sheath layers are seven million years old, although necessary metabolic pathways could have evolved earlier, prior to this adaptation in anatomy. C4 plants are known to differ from C3 plants in their discrimination against atmospheric 13CO2, and shifts in the stable carbon isotope signature of soil carbonate layers that reflect emergence of C4 plants have been dated at 7.5 million years bp. Modern evidence from molecular phylogeny places the origin of the main C4 taxa at 25-30 million years ago (Christin et al. 2009). By inference, C4 photosynthesis evolved in response to a significant decline in atmospheric CO2 concentration, from 1500–3000 µL L–1 to about 300 µL L–1. By evolving a CO2-concentrating mechanism, C4 plants presented their Rubisco with an elevated partial pressure of CO2 despite lower atmospheric CO2. As a consequence, photorespiration was inhibited, maximum photosynthetic rates increased and energetic costs reduced.