The C4 pathway (Figure 2.3) is ‘a unique blend of modified biochemistry, anatomy and ultra-structure’ (Hatch 1987). The classical C4 syndrome in most terrestrial plants consists of two photosynthetic cycles (C3 (or PCR) and C4) operating across two photosynthetic cell types (mesophyll and bundle sheath), which are arranged in concentric layers around the vascular bundle, also known as the kranz anatomy. 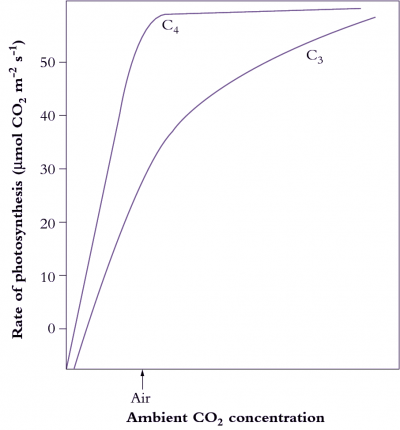 Figure 2.5. CO2 photosynthesis response curves show that C4plants have a higher affinity for CO2. At common ambient levels of CO2, photosynthesis in a C4 leaf is almost fully CO2-saturated, whereas a C3 plant is operating at only one-half to two-thirds maximum rate. This contrast is due to the CO2-concentrating function of C4 photosynthesis. More sophisticated measurement of leaf assimilation as a function of intercellular CO2 (Figures 1-3 in Case study 1.1) can be used to reveal component processes. (Original drawings courtesy M.D. Hatch)

Initial and rapid fixation of CO2 within mesophyll cells results in the formation of a four-carbon compound which is then pumped to bundle sheath cells for decarboxylation and subsequent incorporation into the PCR cycle in that tissue. This neat division of labour hinges on specialised anatomy and has even resulted in evolution of distinct classes of chloroplasts in mesophyll compared with bundle sheath cells. Three biochemical variants of C4 photosynthesis (termed subtypes) are known to have evolved from C3 progenitor and in all cases with a recurring theme where the C4 cycle of mesophyll cells is complemented by a PCR cycle in bundle sheath cells, where Rubisco is exclusively localised. In effect, a biochemical ‘pump’ concentrates CO2 at Rubisco sites in bundle sheath cells thereby sustaining faster net rates of CO2 incorporation and virtually eliminating photorespiration. For this overall mechanism to have evolved, a complex combination of cell specialisation and differential gene expression was necessary. Figure 2.3a shows a low-magnification electron micrograph of a C4 leaf related to a generalised scheme for the C4 pathway. 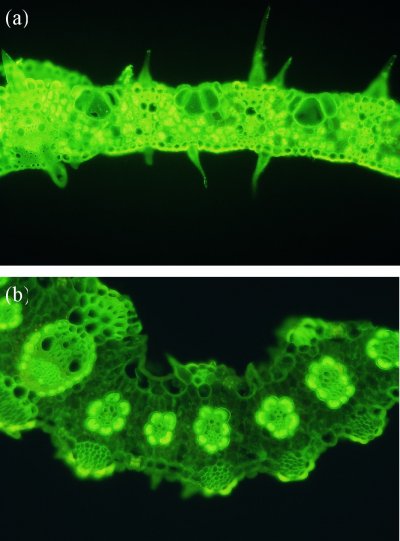 Figure 2.6. Rubisco can be localised in transverse sections of leaves by indirect immunofluorescent labelling where treated sections are viewed in conjunction with autofluorescence controls. Tissues such as bundle sheath extensions and epidermes fluoresce naturally, and such emission has to be ‘subtracted’ from present images. Considering (a), all chloroplasts in this C3 grass leaf (Microlaena stipoides) show a strong yellow fluorescence, indicating general distribution of Rubisco, and hence operation of the PCR cycle. By contrast, in (b), the C4 grass (Digitaria brownii) has restricted Rubisco to bundle sheath cells. In that case, mesophyll cells are devoid of Rubisco, fixing CO2 via the action of phosphoenolpyruvate carboxylase into a four-carbon acid which moves to bundle sheath cells, there providing CO2 for subsequent relaxation via Rubisco and the PCR cycle. Scale bar = 100 µm. (Original light micrographs courtesy Paul Hattersley).

By analogy with Calvin’s biochemical definition of the C3 pathway at Berkeley in the 1950s, the C4 pathway was also delineated with radioactively labelled CO2 (see Feature Essay 2.1). Significantly, and unlike C3 plants, 3-PGA is not the first compound to be labelled after a 14C pulse (Figure 2.3b). Specialised mesophyll cells carry out the initial steps of CO2 fixation utilising the enzyme phosphoenolpyruvate (PEP) carboxylase. The product of CO2 fixation, oxaloacetate, is a four-carbon organic acid, hence the designation ‘C4’ photosynthesis (or colloquially, C4 plant). A form of this four-carbon acid, either malate or aspartate depending on the C4 subtype, migrates to the bundle sheath cells which contain Rubisco and the PCR cycle. In the bundle sheath cells, CO2 is removed from the four-carbon acid by a specific decarboxylase and a three-carbon product returns to the mesophyll to be recycled to PEP for the carboxylation reaction. Thus, label first appears in the four-carbon acid after 14C feeding, followed by 3-PGA and, finally, in sucrose and starch (Figure 2.1b).

A physical barrier to CO2 diffusion exists in the thickened walls of the bundle sheath cells (lined with suberised in some C4 species), preventing CO2 diffusion back to the mesophyll and allowing CO2 build up to levels at least 10 times those of ambient air. Build up of CO2 in the bundle sheath is also facilitated by the higher activity ratio (2-4 times) of PEP carboxylase relative to Rubisco in C4 plants. Rubisco is thus exposed to a saturating concentration of CO2 which both enhances carboxylation due to increased substrate supply, and forestalls oxygenation of RuBP (hence photorespiration) by outcompeting O2 for CO2 binding sites on Rubisco (Figure 2.5).

In leaves of C3 plants, the PCR cycle operates in all mesophyll chloroplasts, but in C4 plants the PCR cycle is restricted to bundle sheath cells (Figure 2.3). Rubisco is pivotal in this cycle, and can be used as a marker for sites of photosynthetic carbon reduction. Rubisco was visualised by localising this photosynthetic enzyme with antibodies via indirect immunofluorescent labelling (Hattersley et al. 1977; Figure 2.6). In this pioneering method, ‘primary’ rabbit anti-Rubisco serum (from rabbits injected with purified Rubisco) is first applied to fixed transverse sections of leaves. Rabbit antibodies to Rubisco bind to the enzyme in situ. Then ‘secondary’ sheep anti-rabbit immunoglobulin tagged with a fluorochrome (fluorescein isothiocyanate) is applied to the preparation. This fluorochrome binds specifically to the rabbit antibodies and fluoresces bright yellow wherever Rubisco is located (blue light excitation using an epifluorescence light microscope).

In the C3 grass Microlaena stipoides (Figure 2.6a), all chloroplasts are fluorescing bright yellow and this indicates wide distribution of Rubisco throughout mesophyll tissue. By contrast, only bundle sheath cells are equipped with Rubisco in the C4 grass Digitaria brownii (Figure 2.6b). These two native Australian grasses co-occur in the ACT but contrast in relative abundance. M. stipoides (weeping grass) is common in dry sclerophyll woodlands throughout southeast temperate Australia, whereas D. brownii (cotton panic grass) in the ACT is at the southern end of its distribution, being far more abundant in subtropical Australia and, in keeping with its C4 physiology, especially prevalent in semi-arid regions.