Rubisco is characterised by its low affinity for its productive substrate, CO2 and slow catalytic turnover rate (i.e., 1-3 cycles per sec). Importantly, Rubisco reacts with O2 (photorespiration), and this culminates in loss of CO2 and energy. In C3 plants, photorespiration can drain more than 25% of fixed CO2 under non-stressful conditions. The ratio of photorespiration to photosynthesis increases with increasing temperature and decreasing intercellular CO2 such as occurs when stomatal conductance is reduced under water stress. C3 plants compensate for Rubisco’s inefficiencies by (i) opening their stomata to increase CO2 diffusion into chloroplasts, which increases water loss and lowers leaf-level water use efficiency, WUE; and (ii) investing up to 50% of leaf nitrogen in Rubisco, which lowers their leaf-level nitrogen use efficiency, NUE.

As mentioned earlier, more than 50% of C4 plants are grasses. C4 grasses are confined to low latitudes and altitudes, whereas C3 species dominate at higher latitudes and altitudes. Generally, C4 species frequently occur in regions of strong irradiance. Ehleringer and colleagues (Ehleringer et al. 1997) proposed that these distribution patterns are best explained by the different responses of photosynthetic quantum yields to temperature between C3 and C4 plants.

As an example, the C4 grasses of the northern Australian savannas are relatively un-shaded because of the low tree density and sparse canopy. Light is abundant and since the CO2 concentration inside C4 leaves is high, a potentially high rate of light-saturated assimilation can be exploited. Most C3 species reach light saturation in the range of one-eight to one-half full sunlight (Figure 2.7). In C4 species, canopy assimilation might not become light saturated even in full sunlight. C4 plants thus maintain a competitive advantage over C3 plants in tropical locations, where average daily light receipt is much larger than in temperate zones, and associated with warmer conditions that also favour C4 photosynthesis (Figure 2.6). Given strong sunlight, warmth and seasonally abundant water, biomass production by C4 plants is commonly double the rate for C3 plants. Typically, C3 plants produce 15–25 t ha–1 but C4 plants easily produce 35–45 t ha–1. 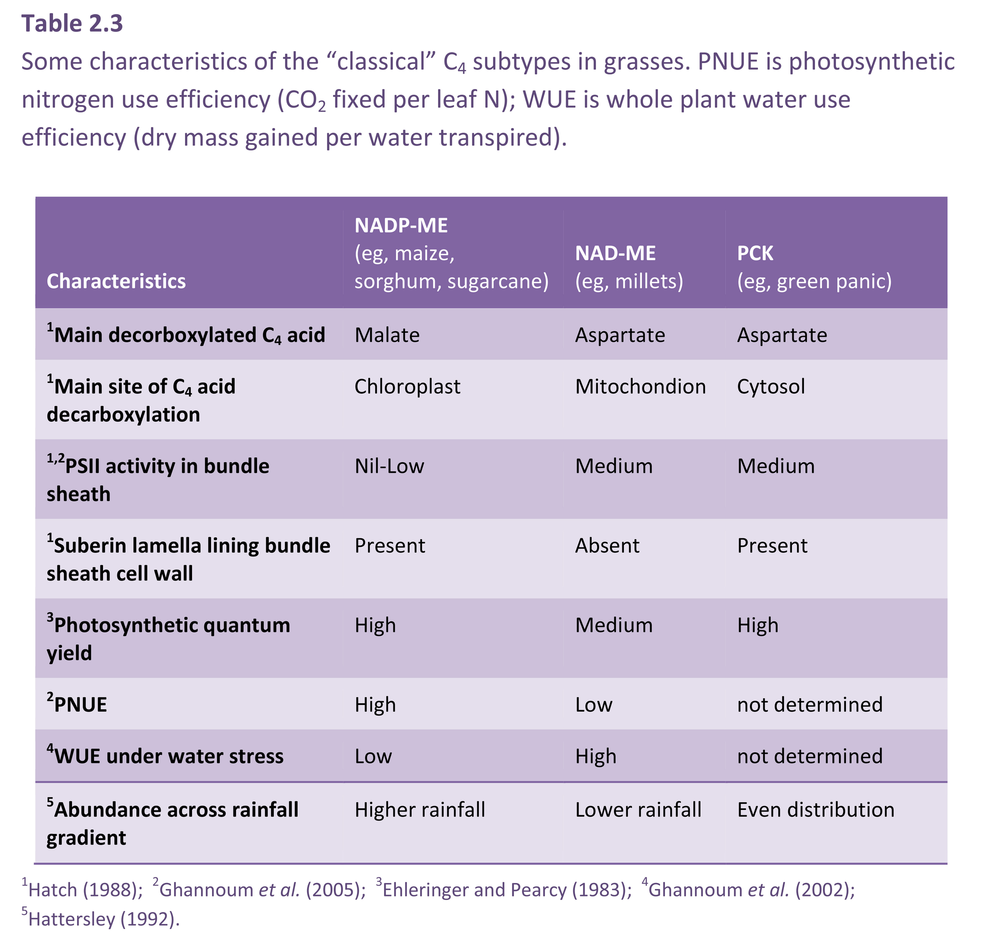 Physiological characteristics of the C4 subtypes

As outlined in previous sections, characteristic biochemical, anatomical and physiological traits are associated with each of the three “classical” C4 subtypes (Table 2.3). However, it should be noted that many C4 plants have leaf structures that fall outside the “classical” subtype division (eg, NADP-ME tribes, Arundinelleae and Neurachneae). As many as 11 anatomical-biochemical suites have been identified in C4 grasses. A curious aspect about the subtypes of C4 grasses is their biogeography. In Australia and elsewhere, NADP-ME grasses are more frequent at higher rainfall, NAD-ME grasses predominate at lower rainfall, while the distribution of PCK grasses is even across rainfall gradients (Hattersley 1992).