2.2.4 - The biochemical subtypes of C4 photosynthesis

C4 photosynthesis calls for metabolic compartmentation which is in turn linked to specialised anatomy (Figure 2.4). Three biochemical subtypes of C4 photosynthesis have evolved which probably derive from subtle differences in the original physiology and leaf anatomy of their C3 progenitors.

Recognising some systematic distinctions in whether malate or aspartate was transported to bundle sheath cells, C4 plants were further subdivided into three subtypes according to their four-carbon acid decarboxylating systems and ultrastructural features (Hatch et al. 1975). Members of each subtype contain high levels of either NADP-malic enzyme (NADP-ME), phosphoenolpyruvate carboxykinase (PCK) or NAD-malic enzyme (NAD-ME) (so designated in Figure 2.8). High NADP-malic enzyme activity is always associated with higher NADP-malate dehydrogenase activity, while those species featuring high activities of either of the other two decarboxylases always contain high levels of aminotransferase and alanine aminotransferase activities. As a further distinction, each of the decarboxylating enzymes is located in bundle sheath cells; NAD-malic enzyme is located in mitochondria but PEP carboxykinase is not.

In all three subtypes, the primary carboxylation event occurs in mesophyll cytoplasm with PEP carboxylase acting on HCO3– to form oxaloacetate. However, the fate of this oxaloacetate varies according to subtype (Table 2.1; Figure 2.8). In NADP-ME species, oxaloacetate is quickly reduced to malate in mesophyll chloroplasts using NADPH. By contrast, in NAD-ME and PCK species, oxaloacetate is transaminated in the cytoplasm, with glutamate donating the amino group, to generate aspartate. Thus, malate is transferred to bundle sheath cells in NADP-ME species and aspartate is transferred in NAD-ME and PCK species. The chemical identity of three-carbon acids returned to mesophyll cells varies accordingly. 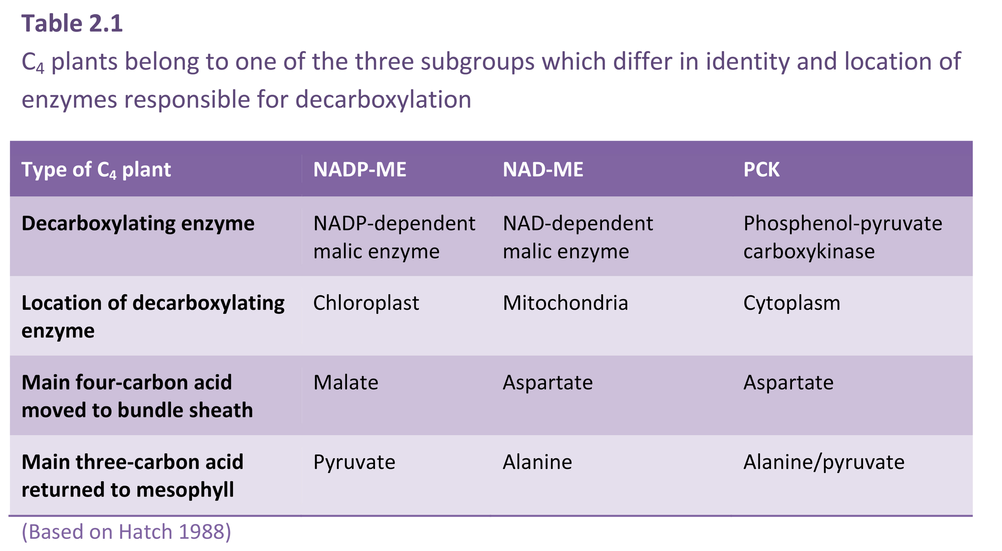 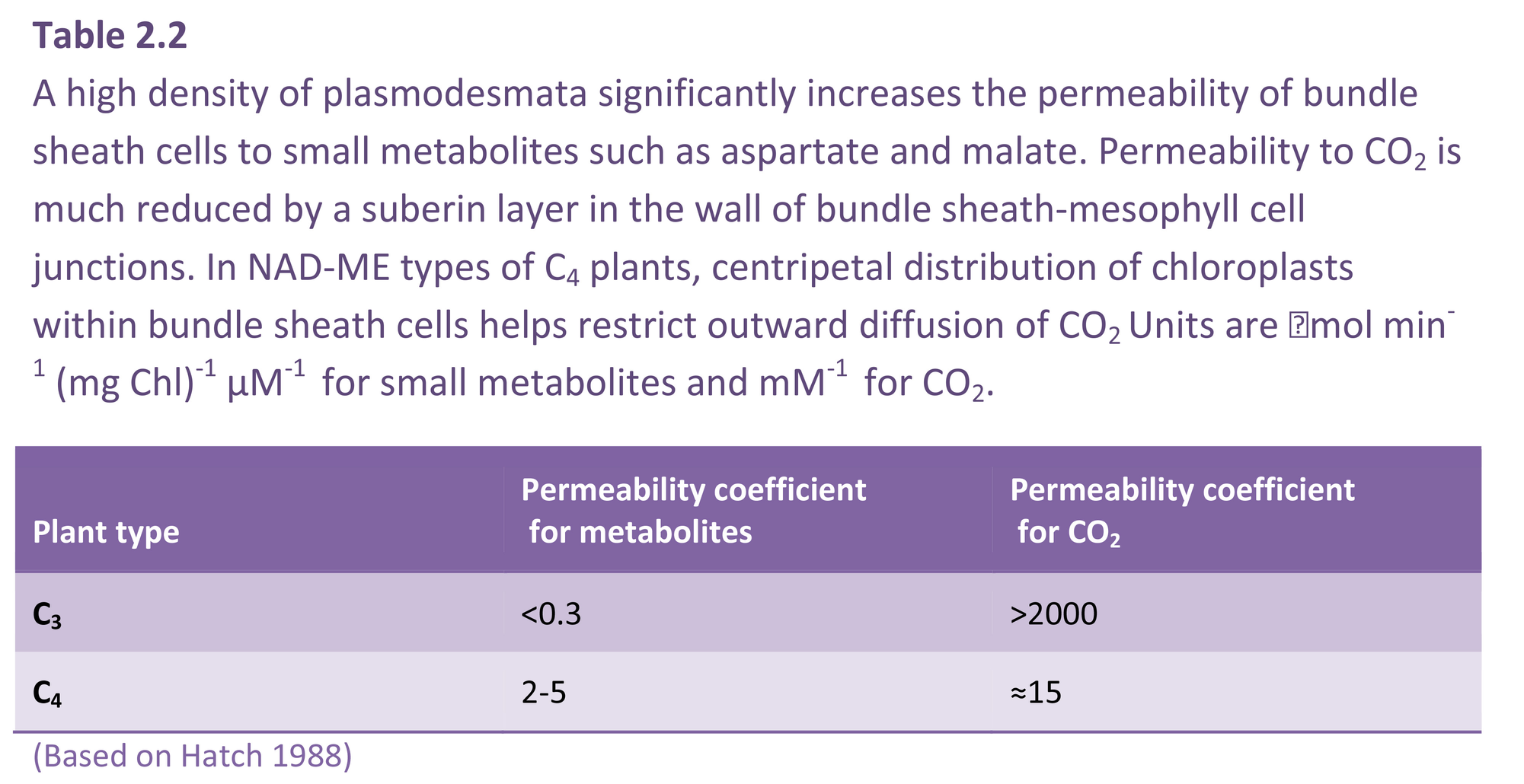 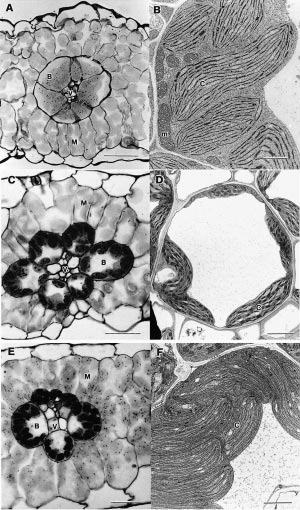 Figure 2.9. C4 plants belong to one of three subtypes shown here in cross-section as light micrographs (left side) and electron micrographs (right side). Top to bottom, these subtypes are designated NAD-ME (A, B) PCK (C, D) and NADP-ME (E, F). Features common to all subtypes include a vascular bundle (V), bundle sheath (B), mesophyll tissue (M) and chloroplasts (C).

Subtype NAD-ME (A, B) is represented by Amaranthus edulis and shows bundle sheath cells with centripetally located chloroplasts containing small starch grains and surrounded by mesophyll cells. The accompanying electron micrograph of a cytoplasmic region of a bundle sheath cell shows chloroplasts and numerous large mitochondria. Scale bar in A = 50 µm; in B = 2 µm.

PEP carboxylase in C4 plants exists in the same homo-tetramer in light- and dark-acclimated leaves. This is in marked contrast to CAM species where different forms exist in light- and dark-acclimated leaves. In C4 plants, PEP carboxylase has extremely low activity at night, thus preventing uncontrolled consumption of PEP. Such complete loss of activity in darkness is mediated via divalent metal ions, pH plus allosteric activators and inhibitors. As a consequence, and over a period of days, C4 plants can increase or decrease PEP carboxylase in response to light regime.